The Suzuki Hayabusa was the fastest production motorcycle in the world, when it was first launched in 1999. Over the years, and two generations later, it’s become a legend in the world of motorcycles. Now, in 2021, the Hayabusa enters a new dawn, getting its most comprehensive updates for the first time since 2008. In its third-generation, the changes to the new 2021 Suzuki Hayabusa are borne out of compulsions due to tightening global emission regulations, but it gets other updates, like state-of-the-art electronics, better brakes and more.

Also Read: Second Batch Of 2021 Suzuki Hayabusa Sold Out In An Hour 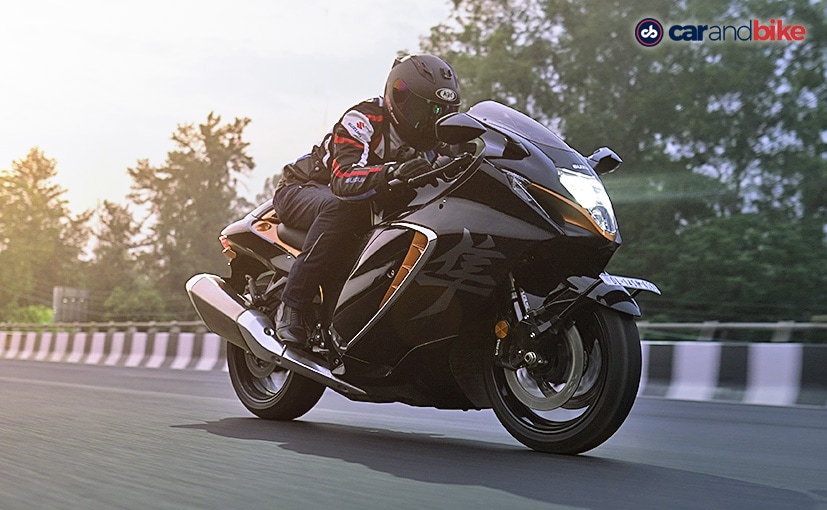 Suzuki has retained the 1,340 cc inline four-cylinder engine, although peak power has seen a drop. But with almost all the engine internals changed, including lighter pistons, more rigid and lighter connecting rods, and new valve springs, the mid-range is stronger, and Suzuki says it’s actually quicker than the outgoing model. And there’s a sophisticated new electronics suite, backed by a new six-axis inertial measurement unit (IMU) with a long list of safety features. We spent some time with the 2021 Suzuki Hayabusa to see what the hype is all about, and if it still has what it takes, to retain its legendary status. 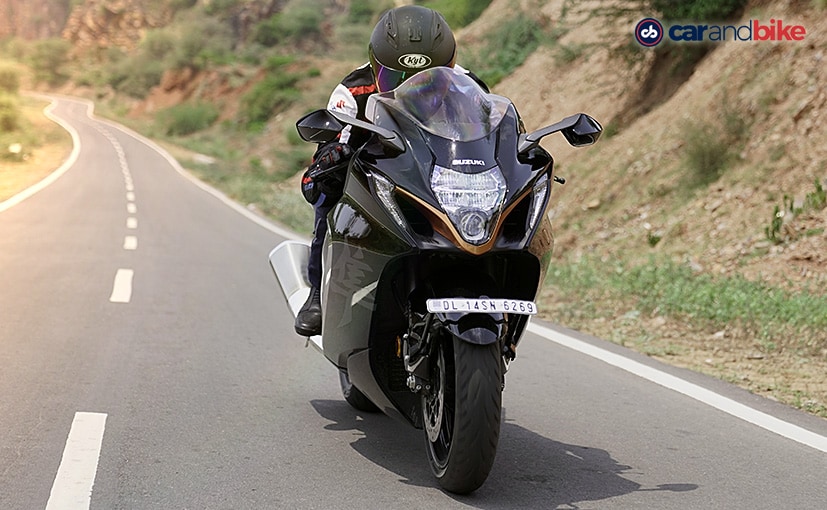 The Hayabusa’s inline four-cylinder engine is smooth, throttle response is spot on, and there’s a strong wave of performance from the get-go

The biggest change is arguably the loss in peak power from the 1,340 cc inline four-cylinder engine, now down to 187 bhp at 9,700 rpm and 150 Nm of peak torque at 7,000 rpm. But the drop in top-end performance is probably a topic that needs no discussion really. Rarely will the average Hayabusa owner get there, and even then, you will need sufficient real estate (like the back straight of the Buddh International Circuit), and superlative riding skills to explore the Hayabusa’s top-end performance! In fact, usable power is better on the new ‘busa, with a stronger mid-range, where 90 per cent of the time it will be used.

Also Read: All You Need To Know About 2021 Suzuki Hayabusa 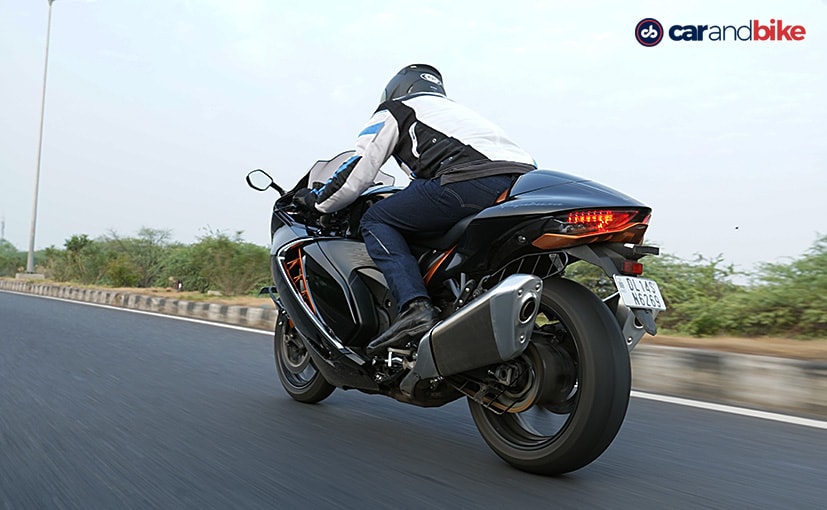 Out on the open road, the Suzuki Hayabusa comes across as confident and stable, with strong performance across the rev range

Out on the open road, the ‘busa is in its element, with stable and confident manners. Throttle response is spot on, without any jerks or surprises, and there’s a wave of smooth and strong power at all times, at any gear. In fact, acceleration is so strong, that you will get to triple digit speeds and more in no time, without even exploring half of the six-speed gearbox. Oh, by the way, there’s a new quickshifter, which offers clutchless upshifts and downshifts, and works quite seamlessly, as long as you’re in the right revs. 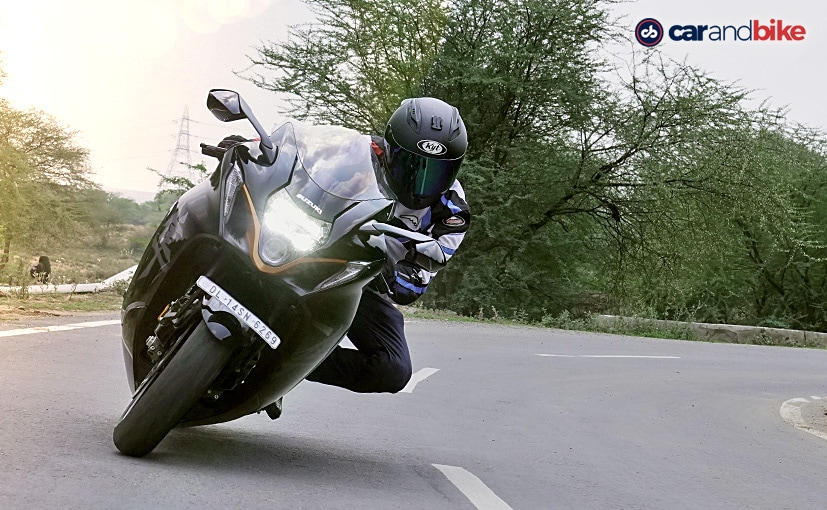 Despite its size and weight, the Suzuki Hayabusa is suprisingly agile and easy to ride. Handling is superb, and ride quality is plush and comfortable

A few blasts through the first two gears leave no doubt that the Hayabusa is very quick, with more than enough performance to get into warp speeds in no time. Fifth gear at 1,500 rpm is enough to cruise at around 50 kmph, but it just needs a slight twist of the throttle, to get to very dangerous, and illegal speeds in no time! It’s a big and heavy bike, the ‘busa, with a long wheelbase, but it still handles beautifully. On a twisty road, the Hayabusa is up for it, to be hustled around a set of corners, and the suspension offers a plush and comfortable ride. Ground clearance is somewhat limited due to its long size, but enough to clear most speedbreakers without scraping the underbody. And despite its size, and huge engine, the ‘busa comes across as a friendly package. 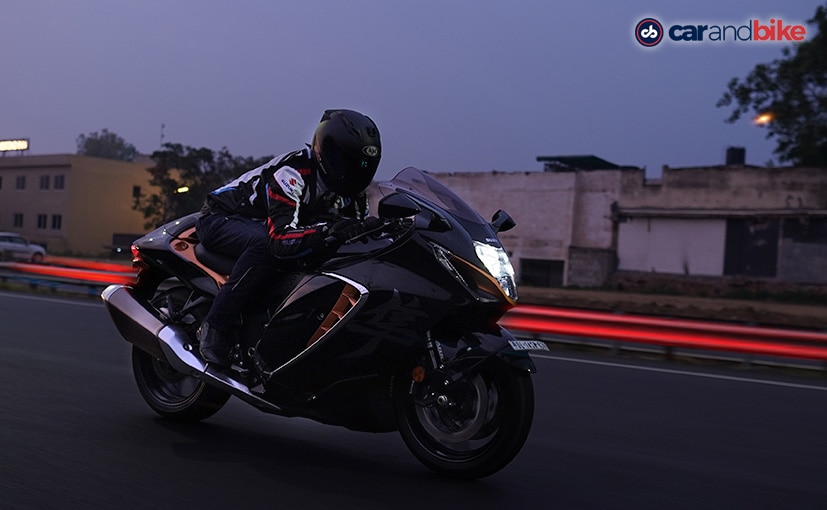 The Suzuki Hayabusa’s explosive performance is reined in by a sophisticated electronics suite, powered by a six-axis inertial measurement unit (IMU)

Performance may be explosive, and scary, but it’s reined in by a sophisticated electronics suite, now powered by a six-axis inertial measurement unit (IMU). There are six riding modes in all, with three pre-set modes, Active (A), Basic (B) and Comfort (C), with Comfort dialing up the 10-level traction control, engine braking and ABS levels, while throttle response is smoothened out. Basic will still give you full power, but with smooth throttle response and higher levels of traction control intervention. 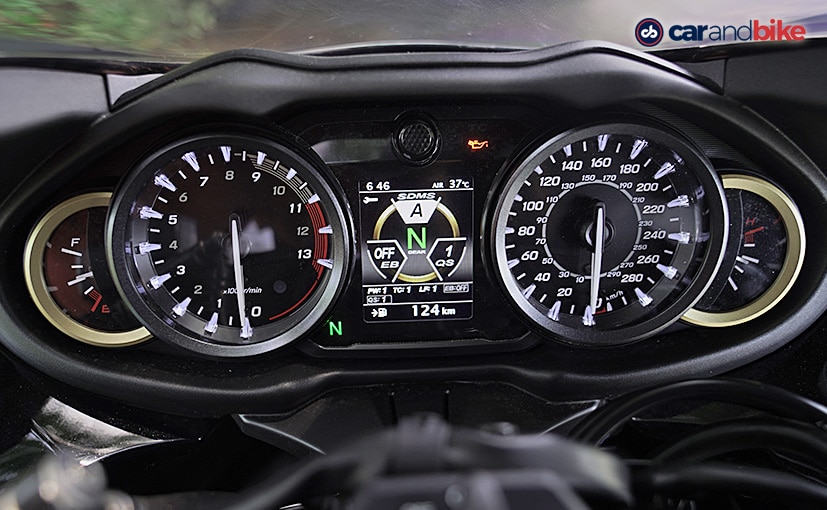 There’s a TFT screen between the rather nice, old-school, analogue speedometer and tachometer

Active unleashes the Hayabusa’s raw power, with traction control dialled down to Level 2, but wheelie control still intervenes when needed, as does engine brake control, and will have the tell-tale lights flashing if you go hot on the throttle. There’s also three-stage launch control, cruise control, hill-hold control, as well as a programmable speed limiter. And yes, there are three more customisable user modes, U1, U2 and U3, where the rider can choose to program each individual setting of his own choice. 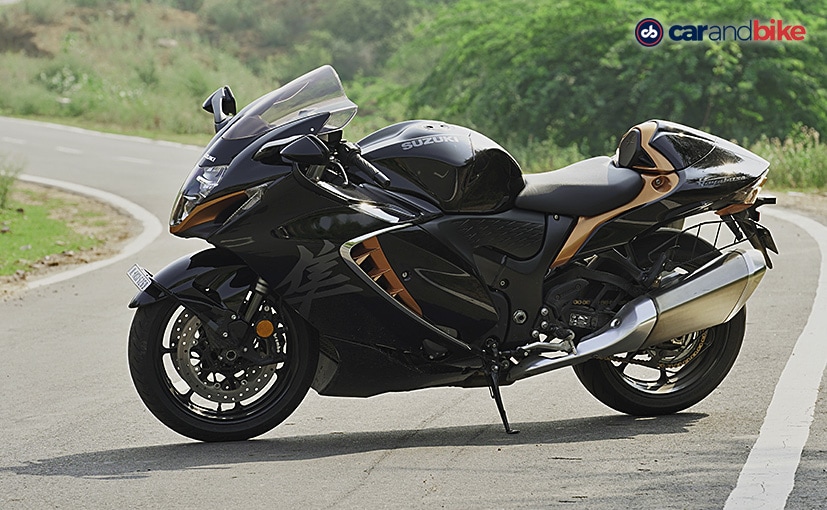 The 2021 Suzuki Hayabusa retains its familiar silhouette; in our eyes, it’s not beautiful in the traditional sense, but it’s a guaranteed head-turner

The 2021 Suzuki Hayabusa still retains its familiar silhouette. Of course, there are some changes to give it fresh appeal; there’s new sleeker and sharper bodywork, all-LED lighting, and an updated instrument console. It retains the analogue speedometer and tachometer, but there’s a new TFT panel located at the centre between the analogue clocks. And it throws up all the details that you need; range, odometer, distance to empty, and also the menus to the riding modes and other state-of-the-art safety features. The best part is, the handlebar controls are simple and intuitive to use, to toggle through the different menus and rider modes; something which is very welcome. 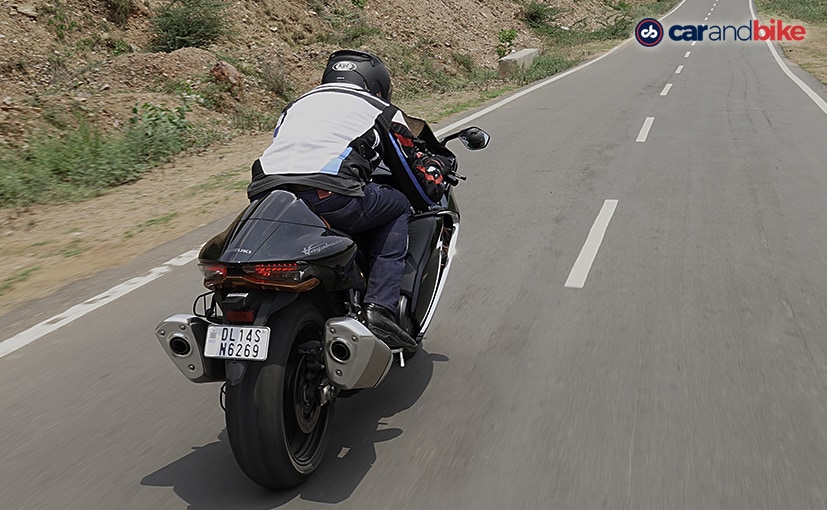 The Suzuki Hayabusa offers entertaining and explosive performance, and retains all the qualities that made it the legendary machine that it is.

Priced at ₹ 16.40 lakh (Ex-showroom), the Suzuki Hayabusa offers superb value. It’s got extremely entertaining performance, a smooth and refined engine, and offers a bike that’s one of the very best out there, and is a guaranteed head-turner. Its looks may be subjective, and to us, it’s not a “beautiful” bike in the traditional sense, but you just can’t ignore it. It’s recognised everywhere, by everyone, and there’s a reason for its legendary reputation, which it very easily manages to retain. 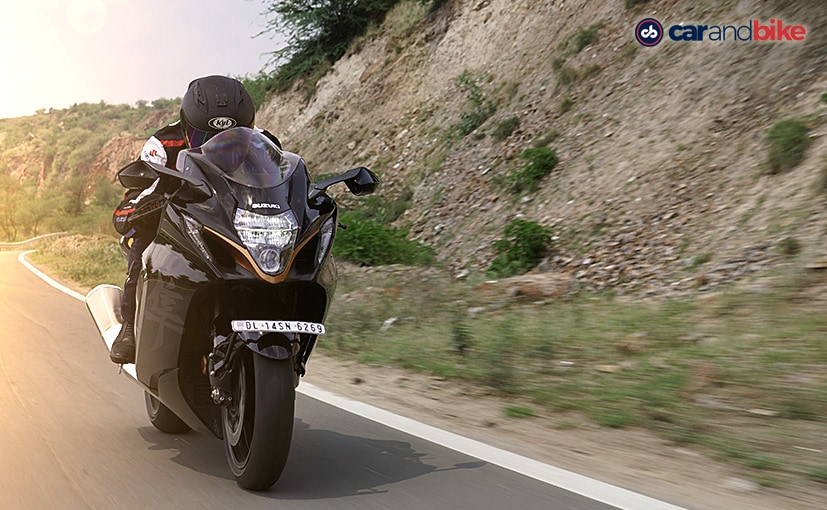 The only downsides are the engine heat, and the rather heavy clutch lever, which can be a handful, especially in traffic

It’s got crackling performance, a sophisticated electronics suite, which makes it safe and easy to enjoy, no matter your level of experience with big, litre-class superbikes, and it’s still a very quick bike. The only downside is that the huge 1,340 cc engine generates a lot of heat on a hot day, which can be quite bothersome, and despite the slip-and-assist clutch, the lever feels heavy and not ideal, if you’re stuck in bumper to bumper traffic. Still, a ride on a Suzuki Hayabusa is something which remains very memorable, and it’s easy to understand what makes the ‘busa such a special bike. Legend it certainly is, and it will continue to turn heads and start conversations for some time to come.

<!-- -->Vodafone Idea: The shares have plunged around 40 per cent in the past three sessions alone ...
Read more
Top Stories