The Yamaha FZ-X is Yamaha India‘s newest motorcycle, a sort of, neo-retro, urban scrambler-style premium commuter, made specifically for India. The Yamaha FZ-X is made to target a growing number of consumers who seek a versatile commuter motorcycle; something which is light, fuel-efficient, easy to ride, and also strong and robust, to take on some rough terrain if required. We spend some time with the new Yamaha FZ-X to get a sense of what it offers, and if it has the goods to make it a winner for Yamaha India. 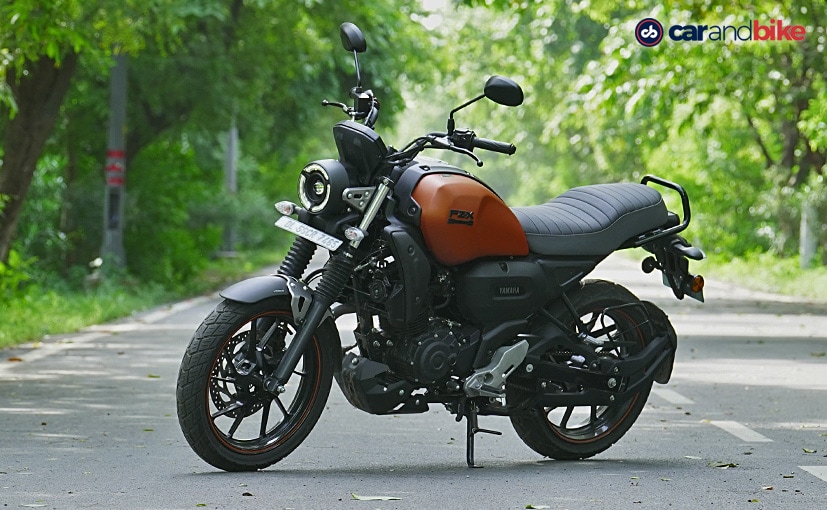 The Yamaha FZ-X offers ADV flavour in its design, if not actual off-road capability; it’s a “crossover” in the true sense

The idea behind the FZ-X is consumer preference. Just like the Indian passenger car segment has become more focussed on SUVs and crossover vehicles, dominated by compact and sub-compact SUVs, the Indian motorcycle industry is also going through a change. More and more consumers are looking for adventure, or specifically, ADV bikes, at least in looks, if not hard-core off-road capability. Everyone wants a slice of adventure, and even manufacturers want to dole out ADV flavour in every segment, including mass-market commuter offerings. That is exactly what the Yamaha FZ-X tries to address. 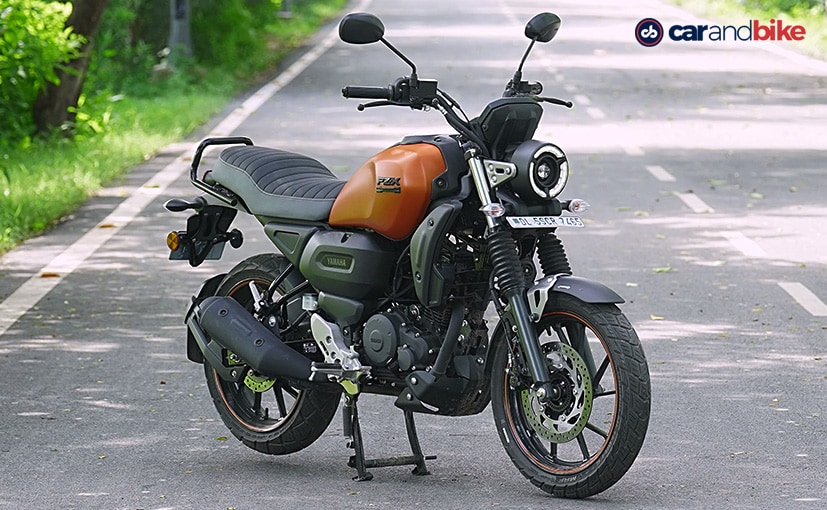 The Yamaha FZ-X certainly has a neo-retro, urban scrambler design. It’s got a love it, or hate it, kind of vibe, and opinions will be divided on its looks.

The Yamaha FZ-X certainly has a neo-retro design, a sort of ‘crossover’ treatment; not really an ADV, but not a street-oriented commuter motorcycle as well. It’s got a love it, or hate it, sort of vibe to it. And opinions will certainly be divided on how the bike looks. India Yamaha says it’s a definite neo-retro design, and oozes a tough and rugged personality, but whether you like the way it looks or not, it’s definitely different from any other 150 cc motorcycle offered on sale in India.

Also Read: All You Need To Know About Yamaha FZ-X 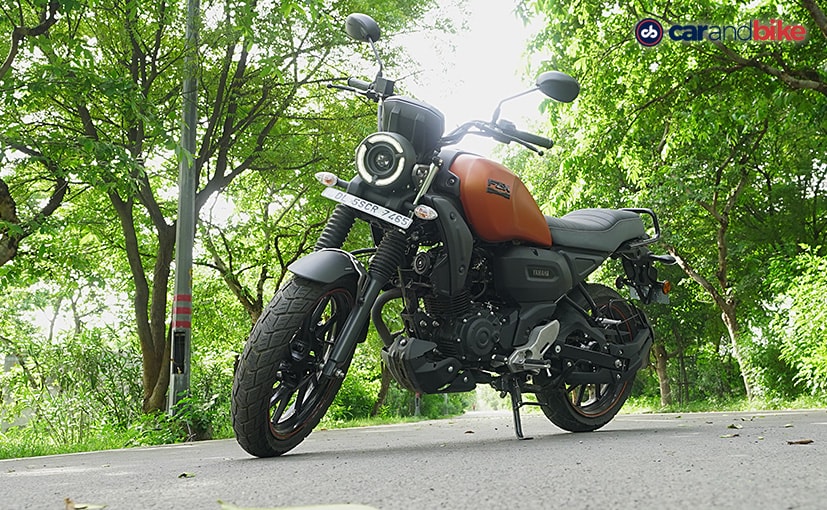 The Yamana FZ-X is based on the 149 cc Yamaha FZ, so it shares the same engine, chassis and cycle parts. The only differences are in the design and bodywork.

The design more or less seems inspired by the Yamaha XSR155 offered on sale in some international markets. The XSR155 is based on the Yamaha YZF-R15, but for India, Yamaha decided to go for affordability, using the tried and tested, as well as successful 150 cc Yamaha FZ platform. But what is different on the FZ-X, is the design and bodywork. 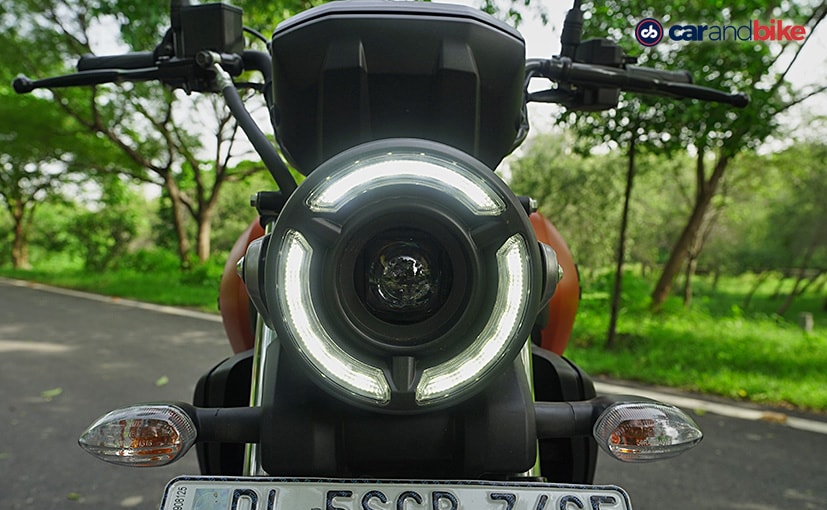 The round LED headlight is quintessentially neo-retro; with modern LED components, yet with the round retro touch

There are premium elements, like the LED headlight, with a LED daytime running light, LED taillight, and metal elements in the bodywork. To go with the ‘crossover’ flavour, the FZ-X comes with a standard, plastic engine bash plate, as well as block pattern tyres for better grip in different types of terrain. To me, the front half of the bike still looks decent enough, but the rear half looks somewhat incomplete and unfinished, and doesn’t quite gel smoothly with the overall design. 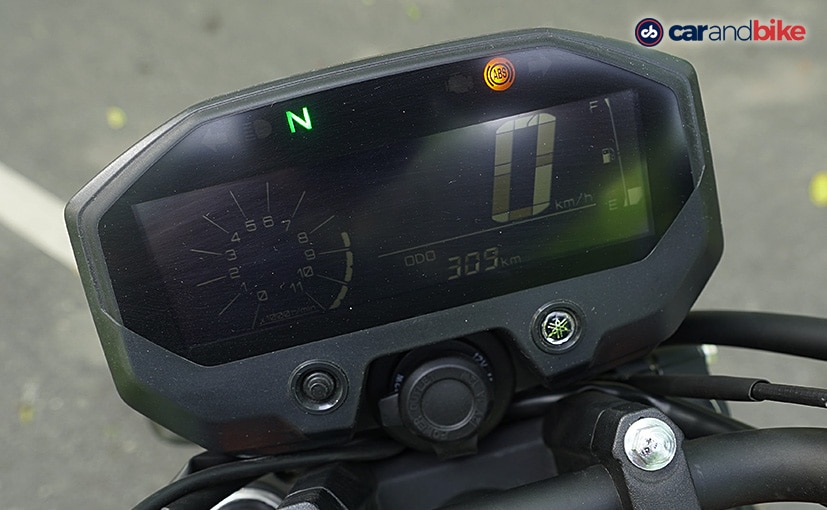 The negative LCD instrument console looks neat, but misses out on a gear position indicator and distance-to-empty readings.

The Yamaha FZ-X gets some unique features, including Bluetooth connectivity through a dedicated Yamaha Motorcycle Connect mobile app, called the Y-Connect app. It offers missed call alerts, and SMS alerts, but sadly doesn’t offer turn-by-turn navigation. Other features on the app include parking locator, which will give the last parked location, fuel consumption figures, battery health and malfunction alerts, as well as service and oil change reminders. The app also has a revs dashboard, which shows engine rpm, degree of throttle opening, rate of acceleration, eco-friendly riding indicator, and other information on the rider’s smartphone. 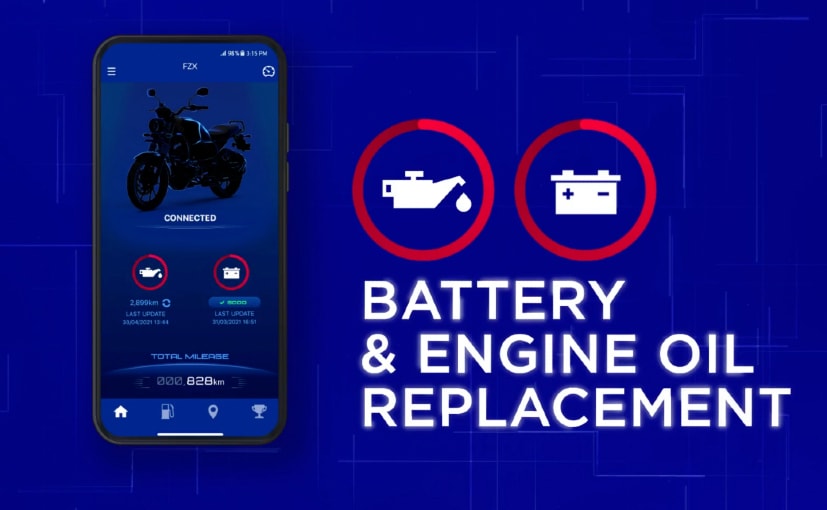 The Yamaha Motorcycle Connect App offers a long list of information, but misses out on turn-by-turn navigation.

The negative LCD screen instrument console is neat, but misses out on some essential information, like a gear position indicator, and distance-to-empty read-outs. The riding position is upright, the footpegs forward set, and overall the FZ-X has a comfortable place riding position, not aggressive, and perfect for long hours in the saddle. But the FZ-X is everything but an off-road bike. At best, it’s a crossover which can be used for the daily commute, and can take on the occasional broken road. But the question is, is it good enough to rake in good sales numbers for Yamaha? 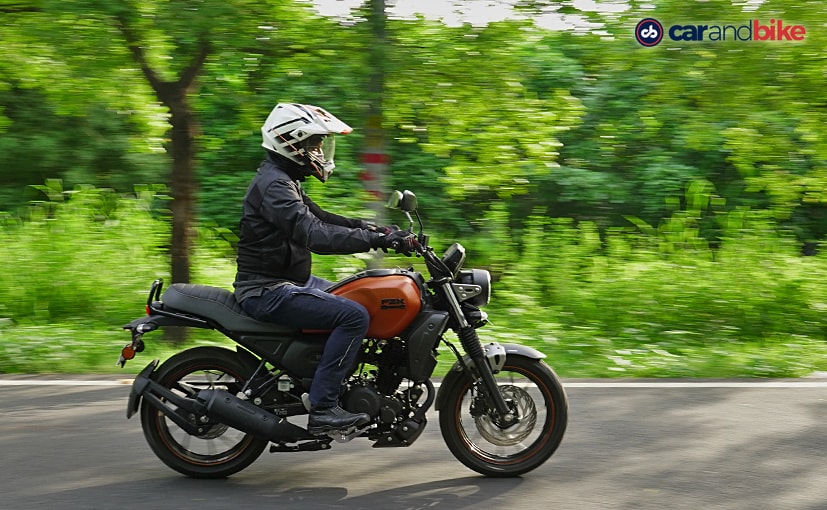 The Yamaha FZ-X has a kerb weight of 139 kg. Performance is familiar because it shares the same 149 cc engine with the Yamaha FZ, along with the same chassis and cycle parts.

The Yamaha FZ-X is based on the 150 cc Yamaha FZ platform, so it shares the same 149 cc, single-cylinder engine so it has the same specifications, with maximum power output of 12.4 bhp at 7,250 rpm and 13.3 Nm of peak torque at 5,500 rpm. The basic frame is the same as the Yamaha FZ models, and the FZ-X has a kerb weight of 139 kg, 4 kg more than the Yamaha FZ FI, thanks to metal parts in the bodywork. 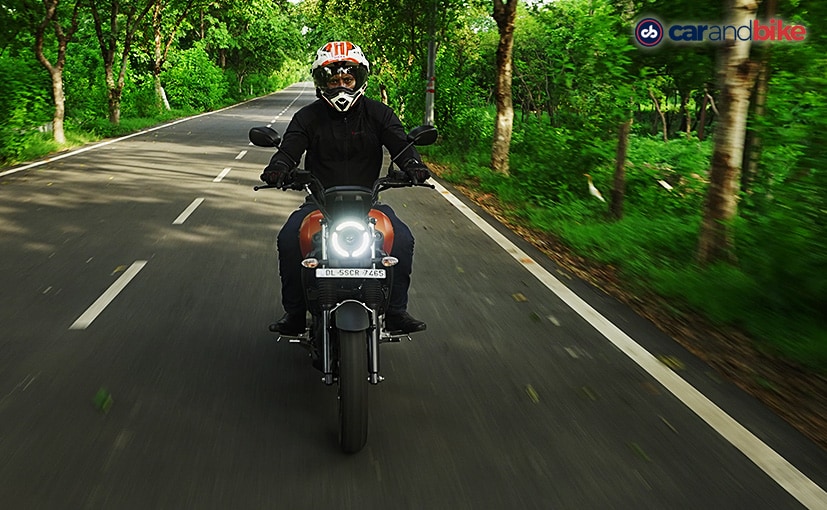 What the Yamaha FZ-X lacks is top-end performance; 80 kmph is achieved easily, but the bike struggles to hit triple digit speeds.

Performance is familiar; the engine is smooth, and the chassis offers confident direction changes, all very good qualities. But what limits the FZ-X’s capability is top-end performance. It’s happiest between 70 kmph and 80 kmph, and will need some prodding, with some real estate and tail wind, to get up to 106 kmph, which is the maximum we saw on the speedometer. Ride quality is nice, not too stiff, not too plush, and the upright riding position is actually comfortable for a long-ish dash across the city. But the lack of performance will mar the bike’s long distance capability if you’re looking for that kind of riding. 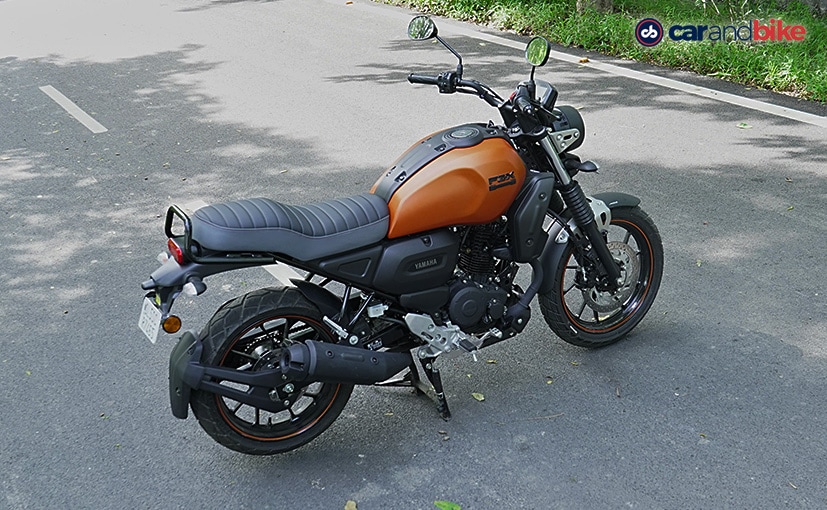 Priced at ₹ 1.17 lakh (Ex-showroom) for the base variant, going up to ₹ 1.22 lakh (Ex-showroom) for the top-spec variant with Y-Connect, the Yamaha FZ-X isn’t quite the affordable motorcycle in its segment. And considering the top-spec variant’s price, it’s knocking at almost the doors of 200 cc bikes with far better performance and dynamics. And even at the base price, it has to contend with the likes of very capable and entertaining 150-160 cc motorcycles like the TVS Apache RTR 160 4V, Suzuki Gixxer 155 and the Hero Xtreme 160R, all of which are more or less in the same price bracket. 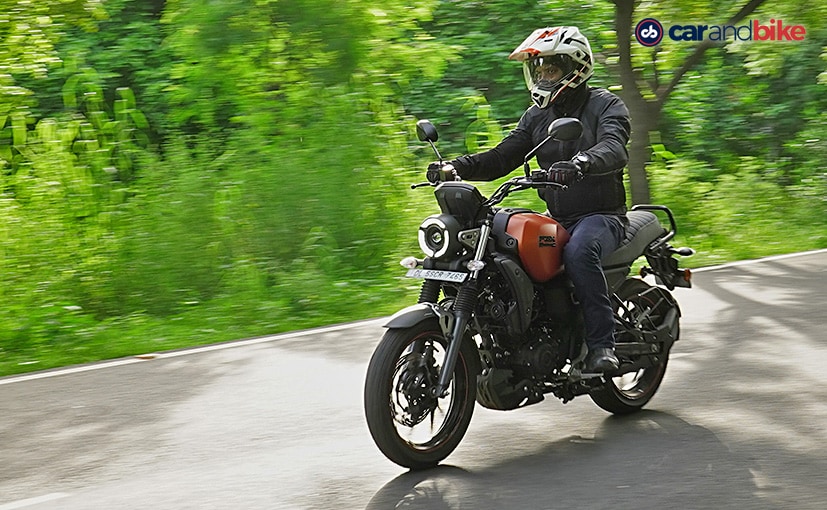 The Yamaha FZ-X offers an interesting proposition. The crossover idea is great, but the design will not work for many, and it lacks the performance and dynamics of its rivals in a similar price bracket.

The Yamaha FZ-X offers an interesting proposition. The idea is great, and will probably start the first of the crossovers in the 150-200 cc segment, like the same way the first Yamaha FZ-16 did with its sharp streetfighter design back in 2008. But the FZ-16 went on to become a runaway hit for Yamaha, and whether the FZ-X can enjoy similar commercial success, remains questionable. 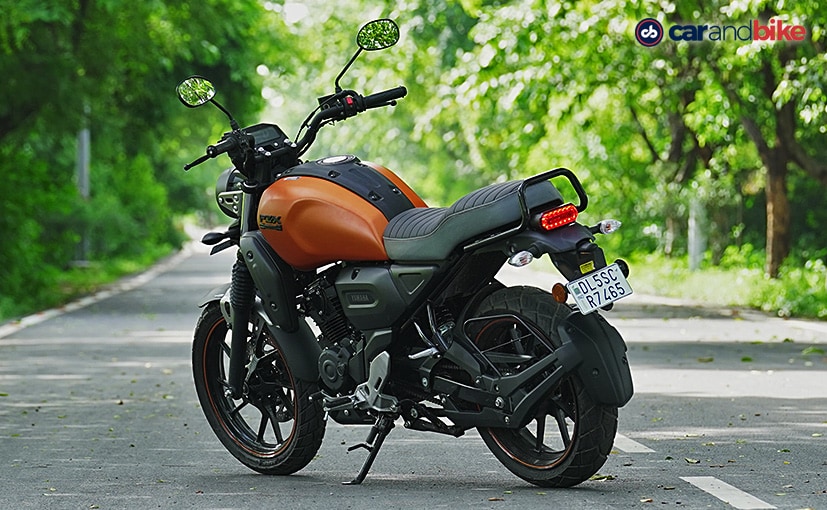 In 2021, the Indian commuter motorcycle consumer has also evolved. Whether the Yamaha FZ-X can repeat the success of the first Yamaha FZ-16 will be questionable.

Remember, the quintessential Indian commuter motorcyclist also has evolved, and in 2021, needs more than just a neo-retro design job like the FZ-X offers. And it’s a design, which, in a way, feels incomplete, rather than being generally attractive. That is its biggest weakness, and to us, the FZ-X comes across as a well-rounded package, but still doesn’t quite cut it as being “special,” like the first Yamaha FZ-16 did, more than a decade ago.