Parineeti Chopra in black bikini enjoys a beach day out in Turkey. Priyanka is jealous

Parineeti Chopra recently dropped a gorgeous picture of herself from a beach in Turkey, dressed in a black bikini. Her sister, Priyanka Chopra is so jealous. 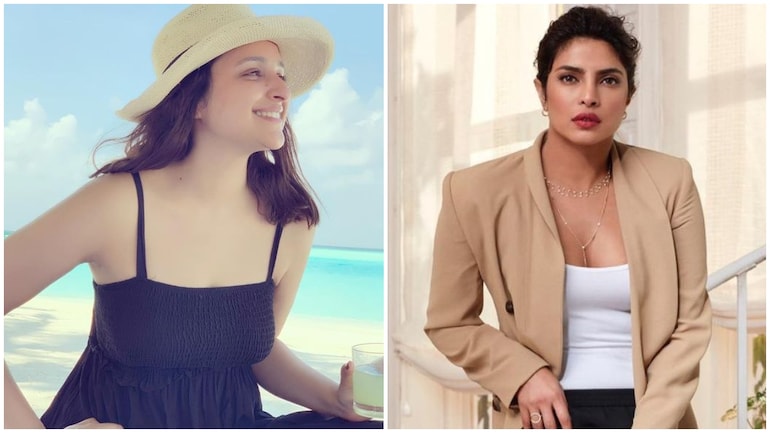 Parineeti Chopra made her sister, Priyanka Chopra, jealous of her recent picture from Turkey.

Parineeti Chopra is currently enjoying a vacation in Turkey and her Instagram account is proof. The actress recently took to social media to share a stunning picture of herself posing in a bikini at the beach. Her sister, Priyanka Chopra, took to the comment section and wrote that she is jealous of her. Parineeti is out of the country since March.

In her latest Instagram post, Parineeti Chopra looks like a complete beach baby as she poses in a black bikini amid a picturesque view. We can see the blue ocean and clear blue skies at the backdrop of her picture. The actress is seen wearing a pair of black shades and she has left her tresses loose. Sharing the picture, Parineeti hilariously wrote, “I was doing Pranayama before this photo. Ok, that’s a lie (sic).”

Check out her picture below:

HOW DID PRIYANKA CHOPRA REACT?

Reacting to Parineeti Chopra’s post, her cousin sister and actress Priyanka Chopra commented, “I am sooo jealous (sic),” along with a heart face emoji. 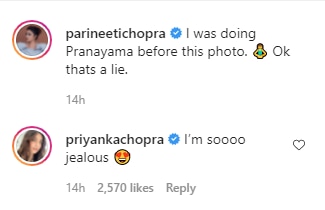 Recently while interacting with her fans during a Q&A session, Parineeti Chopra wrote that she has been outside the country since March. In a reply to a fan, the actress wrote, “I wanna address this since most people are not able to travel from India. I have been outside the country since March. I am lucky enough to be able to travel freely in these difficult times. And I am not taking this blessing for granted (sic).” She has been sharing stunning pictures of herself from Turkey.

ON THE WORK FRONT

Parineeti Chopra had three back-to-back releases this year. The Girl On The Train released in February 2021. Parineeti played the role of an alcoholic divorcee in the film. Sandeep Aur Pinky Faraar, also starring Arjun Kapoor, released in March 2021. Directed by Dibakar Banerjee, the film initially released in the theaters. Her third film Saina is based on the life of ace badminton player Saina Nehwal. Parineeti Chopra was lauded for her performance in the film. Though the film released in the theatres initially, it failed to perform well at the box office due to the restrictions imposed in some states owing to the rise in the number of Covid cases. Parineeti Chopra is yet to announce her next project.

Meanwhile, Priyanka Chopra is currently shooting for her upcoming spy series Citadel. The Amazon-backed project is being helmed by the Russo Brothers. The film also stars Richard Madden. Priyanka also recently completed the shoot of Text For You with Sam Heughan, Celine Dion, Russell Tovey, and Omid Djalili. She will also be seen in Matrix 4 and a film based on the life of Maa Anand Sheela.

ALSO READ | Saina trailer out. Parineeti Chopra-starrer promises to be an inspiring ride