Despite facing a severe financial crunch and lack of resources due to the rampaging Covid-19 pandemic, several states did not avail of the conditional additional borrowing announced by the Centre under the Atmanirbhar Bharat package.

States like West Bengal, Maharashtra, Jharkhand, Mizoram and Nagaland did not pick a single penny from the scheme that could have brought Rs 2.14 lakh additional funds. Eventually, 23 states drew barely half of the total Rs 1.06 lakh crore worth additional conditional borrowing.

On the other hand, states like Kerala, Rajasthan and Andhra Pradesh — ruled by Opposition parties — complied with every condition required to secure the additional funds. Goa and Uttarakhand were the only BJP-ruled states that met all the reform criteria to draw full benefit. States like Gujarat, Uttar Pradesh, Assam and Haryana benefited partially.

States like Bengal did not qualify for the scheme at all and some benefitted partially as they refused to bring about four sets of reforms like seeding all ration cards with Aadhaar numbers and ensuring ePoS machines at fair price shops under the “One Nation One Ration Card” scheme. Maharashtra was the lone state among these that despite meeting several criteria, did not avail of the scheme.

The net result of this failure by these states is not just resource crunch that they keep complaining about but also their residents were denied the facility of portable ration cards across the country and the state.

The table below lists the states that implemented one or more or all reforms to raise additional funds. States like West Bengal and others don’t figure as they totally ignored the scheme. 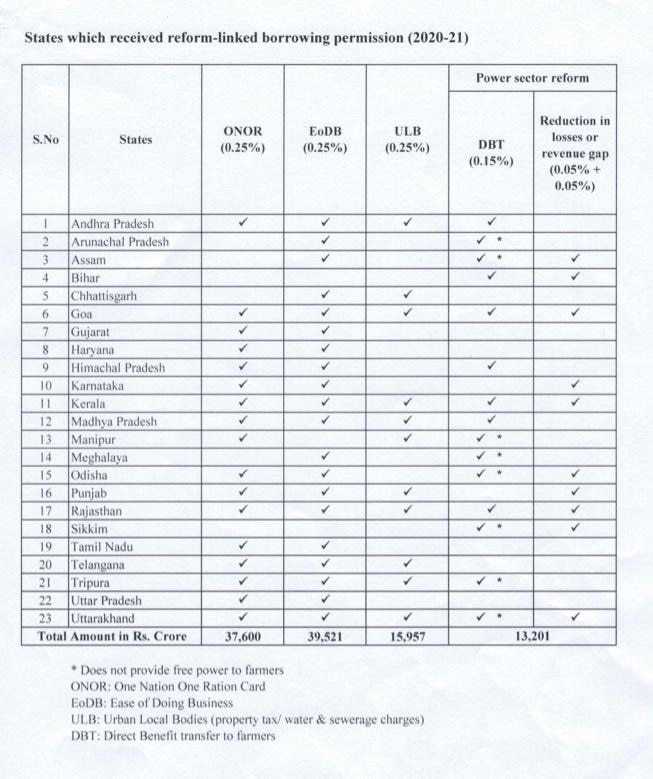 After the first wave of the pandemic and strict lockdowns crippled the economy, the Centre announced a slew of revival measures in the Atmanirbhar Bharat scheme.

As markets were shut and sales were down, GST collections and compensation to states were expected to go down drastically. To support state governments in securing additional funds, the Atmanirbhar Bharat scheme allowed an increase in states’ net borrowing ceiling for 2020-21 from Rs 6.41 lakh crore, based on 3 per cent of Gross State Domestic Product (GSDP) to 5 per cent to provide extra resources of Rs 4.28 lakh crores

The additional borrowing came with some riders. The Centre said state governments would have to bring about state-level reforms to promote the welfare of migrants and reduce leakage in food distribution, increase job creation through investment, safeguard the interests of farmers while making the power sector sustainable.

This is how the states performed on each set of reforms

A) Universalisation of ‘One Nation One Ration card’: Seeding of all ration cards to Aadhaar and ePoS machines at all ration shops to ensure any card holder can draw complete or partial food grain anywhere in the country or within a state of domicile or simply complete inter- and infra-state portability

Seventeen states met the criteria and got Rs 37,600 crore worth of additional borrowing. This brought huge benefits to the people of these states, especially migrants. Nearly 1.3 crore portable transactions were recorded last month.

B) Ease of Doing Business: This involved 19 laws relating to licencing of shops and establishments automatically and online by paying a fee plus random computer inspection of establishments instead of inspectors deciding the target. 20 states met the criteria and availed Rs 39,521 crore additional borrowing.

C) Power distribution: There were three key components — DBT of subsidy in states supplying free electricity to farmers, reduction in technical losses and reduction in gap between revenue and cost

Thirteen states implemented at least one of these reforms. Along with states which don’t provide free power to farmers, states lifted Rs 13,201 crore.

Punjab, which spends a lot of money on free power, did well to reduce the cost-revenue gap but didn’t implement the DBT scheme. Haryana, a BJP-ruled state, did nothing on this front and didn’t qualify to benefit.

D) Urban local body revenues: States were expected to fix floor prices for property and water and waste supply. 11 states completed the mandate and they could borrow Rs 15,957 crore additionally.

Interestingly, many BJP-ruled states couldn’t execute all the reforms prescribed to avail the full potential of the scheme.

Finance secretary TV Somanathan told India Today TV, “The total borrowing potential of the scheme was Rs 2.14 lakh crore. However, due to the states not implementing the requisite reforms, only Rs 1.06 lakh crore was utilised.”

An official in the West Bengal government said during the pandemic, the state was preparing for election and it was difficult to carry out these reforms during that period to qualify for the funds.