37% Children In Rural Areas Not Studying At All; 97% Parents Think Schools Should Reopen

Locked-Out: Emergency Report On School Education released; 37 pc students surveyed are not studying at all

While over 37 per cent of children living in rural areas are not studying at all, only 8 per cent of are studying online on a regular basis, according to a survey conducted by 100 volunteers across the country in 15 states and Union Territories. The “School Children’s Online and Offline Learning (SCHOOL) Survey” was conducted in August 2021 to study the impact of school closures due to the COVID-19 pandemic.

The report, ‘Locked Out: Emergency Report on School Education’, suggests that over 48 per cent of children are unable to read more than a few words.

The survey found that in rural areas, only 28 per cent children were studying regularly at the time of the survey, and 37 per cent were not studying at all. Nearly half of all children in the sample were unable to read more than a few words. Most parents feel that their child’s reading and writing abilities have gone down during the period of lockdown and they “desperately” want the schools to reopen. 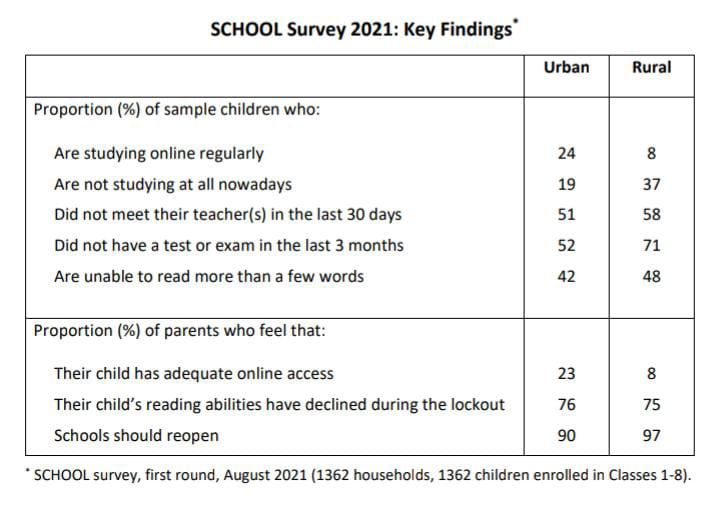 The survey also found that the reach of online education is very limited. The proportion of school children studying online “regularly” was just 24 per cent and 8 per cent in urban and rural areas respectively.

One reason for this low reach, the survey report says, is that many sample households had no smartphone. “Even among households with a smartphone, the proportion of children who are studying online regularly is just 31% in urban areas and 15% in rural areas,” says the SCHOOL survey report.

The proportion of parents among the surveyed who felt that their child had “adequate online access” was just 23 per cent in urban areas and 8 per cent in rural areas. Some children, the survey found, particularly the younger ones, lack understanding of online study, or find it difficult to concentrate online. 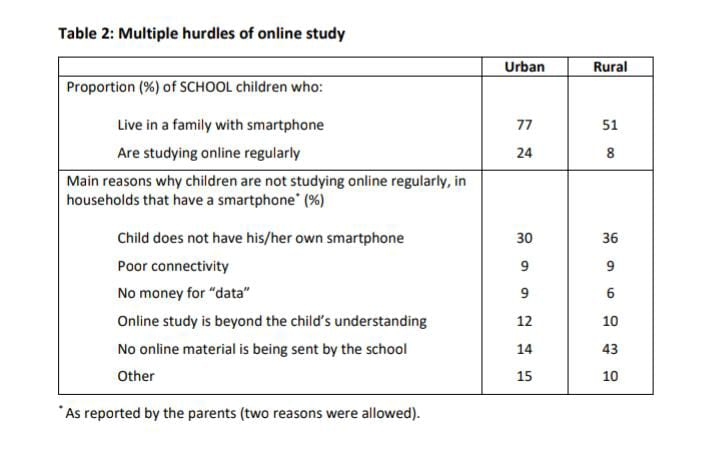 Source: Locked-Out: Emergency Report On School Education
Moreover, two-thirds of urban parents feel that their child’s reading and writing abilities have declined during the period.

A majority of children, which accounts for 51 per cent in urban and 58 per cent in rural areas, had not met their teacher at all during the 30 days preceding the survey. The SCHOOL survey also found that many teachers seemed to be out of touch with their pupils, except for symbolic online interactions like forwarding YouTube links by WhatsApp to some of them from time to time.

The survey also found that mid-day meals have been discontinued in all the sample states with the closure of schools. Among parents with a child enrolled in a government school, the report said about 80 per cent received some food during the preceding three months as a substitute for their child’s midday meals. 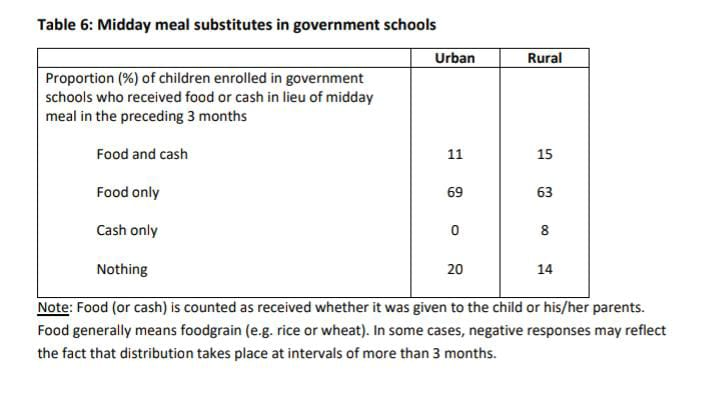 “Only 4% of rural SC/ST children are studying online regularly, compared with 15% among other rural children. Barely half of them were able to read more than a few letters in the reading test. Among rural SC/ST parents, a full 98% wanted schools to reopen as soon as possible,” the survey said.

The report also found that as schools will reopen, children will be set to find themselves “thrice removed” from their class curriculum. This triple gap, the SCHOOL survey says consists of the pre-lockout gap; the decline of literacy and related abilities during the lockout; and the onward march of the curriculum in that period.

<!-- -->Australia renounced its deal for conventional submarines with France. (File)Paris: Choosing a full-fledged confrontation with the United States due to the loss...
Read more
Top Stories

Actor Sonu Sood this morning responded in a tweet after the Income Tax Department on Saturday said he has evaded Rs 20 crore...
Read more

<!-- -->Kolkata: The rainfall is likely to continue for the next two to three hours.Kolkata: In view of the movement of cyclonic circulation...
Read more
Load more