Home India Agencies Do Their Job, No Interference
India

Agencies Do Their Job, No Interference 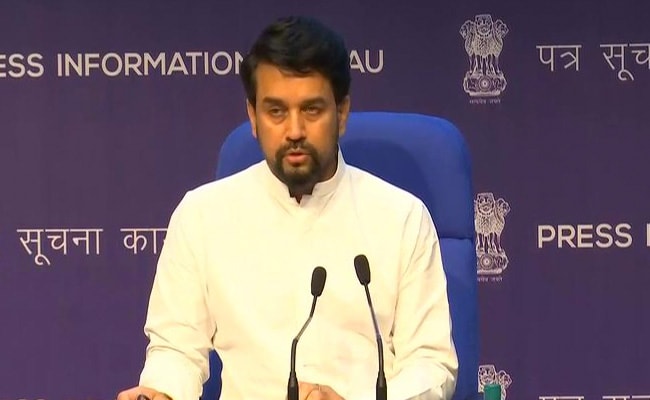 Anurag Thakur said facts need to be found before reporting

Media group Dainik Bhaskar and an Uttar Pradesh-based news channel were raided by Income Tax teams in multiple cities this morning over allegations of tax evasion. As the raids on media outlets critical to the government spurred opposition attacks and condemnation on social media, Information and Broadcasting Minister Anurag Thakur detached the government from the crackdown.

“Agencies do their own work, we don’t interfere in their functioning. I would also like to say that facts need to be found before reporting about any incident. Sometimes lack of information is misleading,” Anurag Thakur told reporters at a cabinet briefing.

Some 100 taxmen searched around 30 locations of Dainik Bhaskar in Delhi, Madhya Pradesh, Rajasthan, Gujarat and Maharashtra. The homes and offices of the group’s promoters were also raided.

A senior editor of Dainik Bhaskar told NDTV that raids were on at the group’s Jaipur, Ahmedabad, Bhopal and Indore offices.

An Uttar Pradesh television channel, Bharat Samachar, was also raided. An Income Tax team searched the Lucknow office and also the editor’s home to examine tax documents, according to sources.

The raids were based on “conclusive evidence of tax fraud” by the channel, said officials. Bharat Samachar’s recent reporting has been critical of the UP government.

The opposition alleged that the raids were linked to reports on Covid “mismanagement” by the government.

The attack on journalists & media houses is yet another BRUTAL attempt to stifle democracy.#DainikBhaskar bravely reported the way @narendramodi ji mishandled the entire #COVID crisis and led the country to its most horrifying days amid a raging pandemic. (1/2)

“Through its reporting Dainik Bhaskar has exposed the Modi regime’s monumental mismanagement of the COVID-19 pandemic. It is now paying the price. An Undeclared Emergency as Arun Shourie has said — this is a Modified Emergency,” tweeted Congress leader Jairam Ramesh.

Rajasthan Chief Minister Ashok Gehlot called it a brazen attempt to suppress the voice of the media.

Income Tax raid on Dainik Bhaskar newspaper & Bharat Samachar news channel is a brazen attempt to suppress the voice of media. Modi government cannot tolerate even an iota of its criticism. Due to its fascist mentality, the BJP doesn’t want to see the truth in a democratic setup.

One of the largest newspaper groups in the country, the Dainik Bhaskar was at the forefront of reporting on the scale of devastation in the second wave of Covid in April-May.

Dainik Bhaskar put out a series of reports that took a critical look at official claims during the pandemic as raging infections left people desperate for oxygen, hospital beds and vaccine.

Its reportage exposed the grisly sight of bodies of Covid victims floating in the river Ganga and washing up on the banks of towns in Uttar Pradesh and Bihar, possibly discarded because of the lack of means to cremate them. The reports also revealed bodies buried in shallow graves by the river in UP.

The New York Times had, a  month ago, published Dainik Bhaskar editor Om Gaur’s op-ed on Covid deaths in India, titled: “The Ganges Is Returning the Dead. It Does Not Lie.”

The opinion piece was extremely critical of the government’s handling of the coronavirus peak. The holiest of India’s rivers “became Exhibit A for the Modi administration’s failures and deceptions”, he wrote.