Home India Airports Among $81 Billion Of Infrastructure To Be Sold By Centre: Report
India

Airports Among $81 Billion Of Infrastructure To Be Sold By Centre: Report The plan will include sale of road and railway assets, and power transmission lines, said sources. (File)

The Centre plans to raise Rs 6 trillion ($81 billion) from selling state-owned infrastructure assets over next four years to help bolster the government’s finances and plug its budget deficit, according to people familiar with the matter.

The plan will include sale of road and railway assets, airports, power transmission lines and gas pipelines, said the people who asked not to be identified as they aren’t authorised to share the details. Finance Minister Nirmala Sitharaman is scheduled to make the road-map public later Monday.

The planned sales are in line with Prime Minister Narendra Modi’s strategic divestment policy, under which the state will retain presence in only a few identified sectors with the rest privatized. The government has budgeted as much as Rs 1.75 trillion from such sales in the year through March 2022 to make up for the pandemic-linked drop in tax revenue. 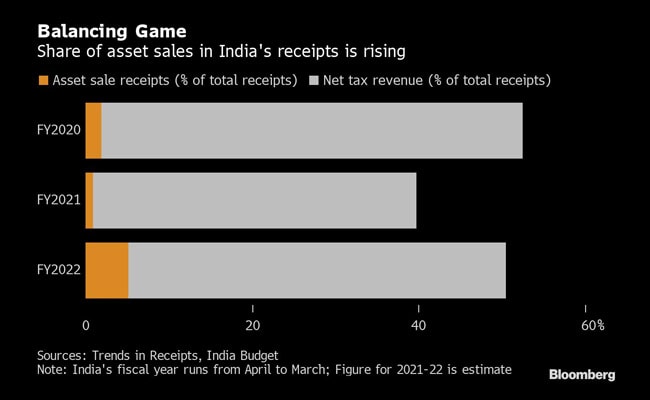 While broader divestment proposals this year include an initial public offering by Life Insurance Corp. of India as well as stake sales in companies such as Bharat Petroleum Corp. and Air India Ltd., Ms Sitharaman is expected to announce Monday plans only for monetizing infrastructure assets held by 11 ministries.

Revenue from monetizing roads is pegged at Rs 1.6 trillion, while that from railways is seen at Rs 1.5 trillion, the people said. Power sector assets may fetch Rs 1 trillion, gas pipelines Rs 590 billion and telecommunication assets Rs 400 billion, they said.

A finance ministry spokesperson could not be immediately reached for comment.

The monetization plan, announced by Ms Sitharaman in her annual budget speech, will serve as a medium-term road map for the government’s asset sale initiative, state-run think tank NITI Aayog said in a statement Sunday.

The income from the asset sales is key to narrowing the nation’s budget deficit, which Ms Sitharaman expects to be 6.8% of the gross domestic product in the financial year that began April 1, from 9.3% in the previous year. Several economists expect the country will miss that target due to economic disruptions caused by a second wave of the Covid-19 pandemic.

<!-- -->The service weapon of the head constable got accidentally discharged. (Representational)Bijapur: A jawan of the Central Reserve Police Force (CRPF) was killed...
Read more
India