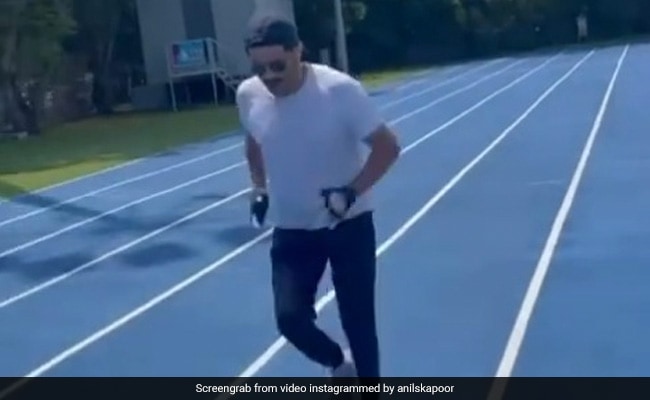 Anil Kapoor in a still from the video. (Image courtesy: anilskapoor)

Actor Anil Kapoor, who is often seen setting fitness goals on social media with pictures and videos from his training sessions, dropped a new video on Instagram today. This time, Anil Kapoor chose sprinting for his training session. In the video, Anil Kapoor can be seen running like the wind on the track. The video has been shot by fitness enthusiast Marc Mead, who can also be heard asking Anil Kapoor to “pick up the pace” after every short interval in the video. Sharing the video on Instagram, Anil Kapoor expressed happiness “to be back on the tracks again.” He credited Indian athletes participating in Tokyo Olympics for the inspiration. “So happy to be on tracks again! Inspired by our Indian athletes in Tokyo who are making the whole country proud,” Anil Kapoor wrote in the caption of the post.

Many fans of the actor dropped comments on his video. “Sir you really inspired me …keep going is the mantra,” a fan wrote in the comments section of Anil Kapoor’s post.

This isn’t the first time that Anil Kapoor gave us a glimpse of his running session. Last month, the actor had dropped another video that featured him sprinting on the track. “They say you can’t outrun your problems, but I will try my best to always out sprint mine,” he wrote in the caption.

Check out the video here:

Anil Kapoor never fails to prove that age is just a number with his fabulous social media posts. He often shares pictures and videos from the gym.

Here are some of them:

In terms of work, Anil Kapoor was last seen in Netflix film AK vs AK. He will next be seen in Raj Mehta’s Jug Jugg Jeeyo.

What Sums Up Malaika Arora’s “Life”

What Transpired At Amit Shah Meet: Congress Over Northeast Violence

<!-- -->Amit Shah had chaired a meet over inter-state border disputes. (FILE)Guwahati: The Congress on Monday hit out at the BJP over the...
Read more
Trending News

All zodiac signs have their own characteristics and traits which define someone’s personality. Wouldn’t it be helpful if you started your day by...
Read more

<!-- -->Britney Spears new petitions will be heard on December 13 (File)Los Angeles: Britney Spears has launched a legal bid to remove her...
Read more

<!-- -->China said that its relation with US is now in a stalemate (Representational)Washington/Beijing: The desire to seek hegemony or territorial expansion is...
Read more
Load more

All zodiac signs have their own characteristics and traits which define someone’s personality. Wouldn’t it be helpful if you started your day by...
Read more

<!-- -->Britney Spears new petitions will be heard on December 13 (File)Los Angeles: Britney Spears has launched a legal bid to remove her...
Read more