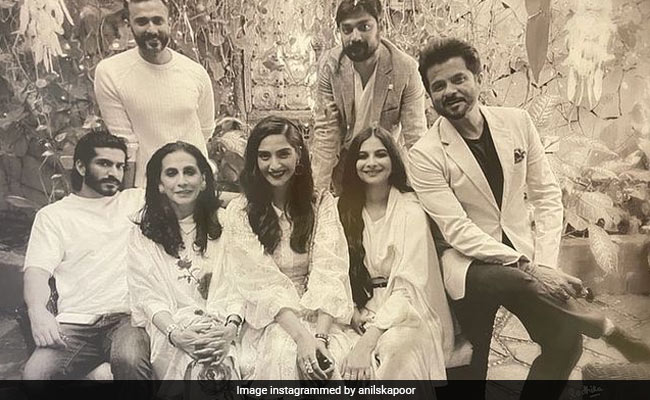 Bollywood veteran Anil Kapoor shared a post in which he described his family as “the biggest blockbuster ever.” He posted a picture from daughter Rhea’s wedding, which took place recently. He also shared a family photo, which features his wife Sunita Kapoor, daughters Sonam and Rhea, son-in-laws Anand Ahuja and Karan Boolani, and son Harsh Varrdhan Kapoor. He captioned the post: “And with that, I feel like my Magnum Opus is complete…With our 2 super-daughters and 3 super-sons, we have the biggest blockbuster ever! Our hearts are full and our family is blessed.”

Anil Kapoor’s daughter and film producer Rhea Kapoor got married to longtime boyfriend Karan Boolani in an intimate ceremony on Saturday night, in the presence of a few family members. She shared this post from her wedding on Monday:

Sonam Kapoor married her longtime boyfriend Anand Ahuja in a big, fat wedding in May 2018, which was a star-studded affair. Anand Ahuja runs the fashion label Bhane and the sneaker boutique VegNonVeg. The couple were staying in London for over a year. Sonam returned to Mumbai a few weeks ago.

Anil Kapoor and Sunita Kapoor got married in 1984. The couple first met on the sets of Meri Jung. Their daughter Sonam Kapoor is a renowned Bollywood actress. Their middle child Rhea is a film producer and runs an apparel brand Rheson with sister Sonam. The couple’s son Harsh Varrdhan Kapoor is also a Bollywood actor.

<!-- -->UP cabinet expansion: Yogi Adityanath and the BJP face a stern challenge in next year's election (File)Lucknow: A crucial expansion of the...
Read more
Trending News

The Sooryavanshi Moment Akshay Kumar’s Been Waiting For

<!-- -->A BTS glimpse of Sooryavanshi sets (courtesy akshaykumar)Highlights'Sooryavanshi' will release on Diwali this year Akshay Kumar made the announcement on social media Theatres will...
Read more
Trending News

<!-- -->UP cabinet expansion: Yogi Adityanath and the BJP face a stern challenge in next year's election (File)Lucknow: A crucial expansion of the...
Read more
Load more