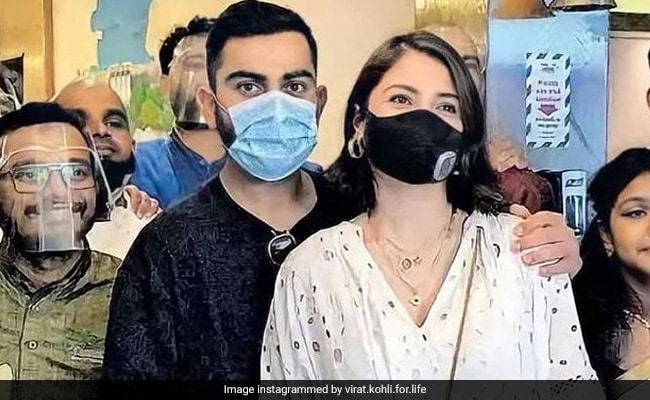 A fan page shared this photo of the couple. (Image courtesy: virat.kohli.for.life)

Anushka Sharma and Virat Kohli, who are currently in the UK with their little daughter Vamika, celebrated Onam at a Kerala restaurant in Yorkshire on Monday. Pictures and videos of the couple from their Onam celebrations at the Tharavadu restaurant have been doing rounds on the Internet. In the viral photos, Anushka Sharma looks gorgeous in a white dress while Virat Kohli can be seen sporting a black tee and trousers. The duo even posed with the staff of the restaurant and their fans on their way out. Several fan clubs dedicated to Anushka Sharma and Virat Kohli have been resharing the photos and videos of the couple on their respective Instagram profiles. Check them out now:

Virat is in London for Team India’s five-match Test Series with England. Anushka Sharma flew to the UK with him and their daughter earlier this year.

Anushka Sharma and Virat Kohli have been having a whole lot of fun in England. The couple try new cuisines at different restaurants every other day. Recently, they visited a restaurant named Tendril Kitchen, which is known for its vegan food. The duo loved the restaurant so much that they went there again.

Last week, Tendril Kitchen shared new photos of Anushka Sharma and Virat Kohli and wrote: “A lot can happen in 48 hours! Anushka Sharma discovered Tendril Kitchen online where she loved the photos and reviews. That made Virat Kohli call my number to book a table. I didn’t realise who had made the booking till I saw the power couple walking in to our restaurant, making me feel so proud – and a little terrified that they enjoy the food and experience of dining at Tendril! Serving them and speaking to them, I quickly realised they are what they are for a reason – super humble and incredibly talented. Anushka’s Insta call-out and both declaring this the best meal they have ever had has been HUGE…But it wasn’t over. Anushka and Virat were back again for dinner, this time bringing with them some more stalwarts from the India Cricket team making the day feel MEGA HUGE!”

Bobby Deol Was Missing Son Aryaman, So He Posted This Pic

<!-- -->Bobby Deol with family. (courtesy iambobbydeol)HighlightsBobby Deol posted a picture with Aryaman and Tanya He added the hashtags #loveyou and #missyou He...
Read more