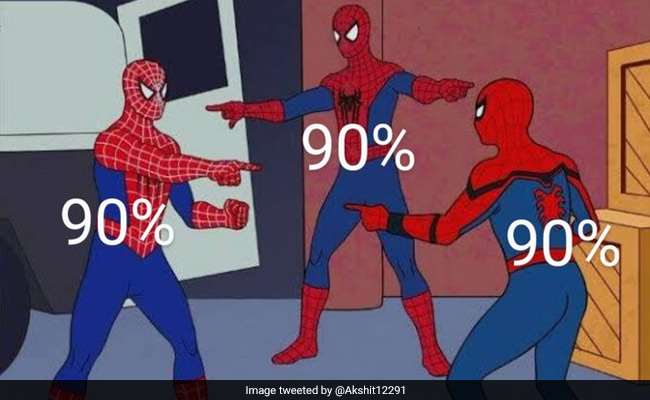 Class 12 students had much to cheer about today as the Central Board of Secondary Education (CBSE) released the results this afternoon. With a stunning pass percentage of 99.37%, the results were hugely positive for an academic year that was marred by the COVID-19 pandemic and subsequent lockdowns. This year, as many as 13,69,745 regular candidates were registered for the CBSE class 12 examination. Of this, 70,004 students scored above 95 per cent marks while a whopping 1,50,152 students scored above 90 per cent. And social media lost no time to celebrate the record pass percentage with the choicest memes and witty one-liners.

However, before we let you in on what students and parents had to say about the stellar performance this year, we have to acknowledge that it was the official Twitter account of the CBSE that set the ball rolling for the memes. In fact, the Board used a scene from the Bollywood hit Dilwale Dulhania Le Jayenge to announce the time of the results. As expected, the meme had Twitter users cracking up.

CBSE Class XII Result to be announced today at 2 P.M.#ExcitementLevel????%#CBSEResults#CBSEpic.twitter.com/eWf3TUGoMH

That’s not all. They even used an iconic scene from the film Hera Pheri to remind students to keep all the necessary information handy.

Results can also be downloaded from DigiLocker#ExcitementLevel????#CBSEResults#CBSEpic.twitter.com/soXay0aijK

And once the results were announced, there was no stopping the students and meme makers. Acknowledging the fact that thousands of students had obtained over 90%, one user shared the classic Superman meme.

#CBSE declared #12thResults
More than 1.5 lakh students got 90% or above pic.twitter.com/3MqP5cF9Ra

Parents were thrilled and there was another Amrish Puri meme to prove that.

Your parents, when you pass without even giving exams.#12thResultspic.twitter.com/unan7i6eNy

Even the proverbial “backbencher” had managed to get 90%, one user said.

Meanwhile backbenchers after seeing their 12th board result . pic.twitter.com/eBsxj7lYwV

Many of them had not even expected such high grades, some users said.

Some users felt that the good results would help keep the nosey relatives at bay.

Me After Seeing the Result ???????? #CBSEResult#CBSEResults#12thResultspic.twitter.com/pKefQgY2nQ

Due to the pandemic, board exams were cancelled this year. The results were arrived at on the basis of an alternate assessment policy by the board, which involved their grades from Class 10, 11 and 12.

<!-- -->The girls were coming to the hospital to visit their ailing mother (Representational)Panaji: A ward boy of a state-run hospital in Goa...
Read more
Latest Stories