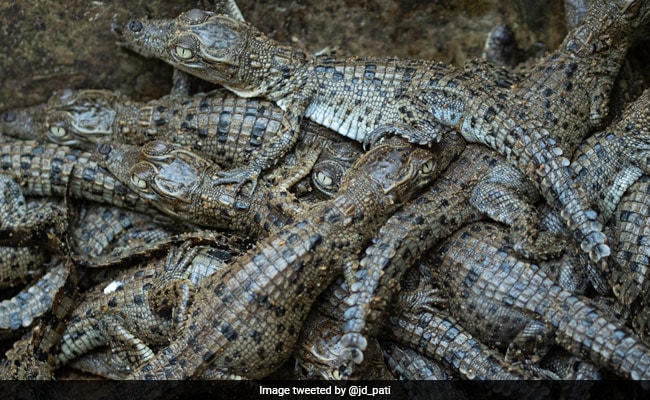 Hatchlings of estuarine crocodiles have started emerging from eggs and making their way to water bodies in and around the Bhitarkanika National Park in Odisha, officials said on Monday.

The sight of baby crocodiles coming out of the eggshells and loitering before hopping into the water bodies marked the culmination of the annual breeding and nesting season of these reptiles.

They will be reared for about a year or two at the captive pond of the hatchery enclosure and then released, according to the official.

“Female crocodiles lay 50 to 60 eggs and the hatchlings usually emerge from the nests after 70 to 80 days of the incubation period,” said Sudhakar Kar, crocodile expert, and former research officer of the Forest Department.

“However, hardly one out of every 100 baby crocodiles grows into an adult as their mortality rate is very high. The babies are devoured in the wild by predators,” Mr Kar said.

Crocodiles are accorded the highest protection under Schedule I of the Wildlife Protection Act.

The sanctuary remains closed from May 31 to July 31 every year to ensure disturbance-free annual nesting of the reptiles. The ban on tourists is necessary as human interference can turn the crocodiles violent, the official said.

Estuarine crocodiles are also found in the Sundarbans, besides the mangrove wetlands in the Andaman Islands. But the density and population of the crocodiles are more pronounced at Bhitarkanika, home to the second-largest mangrove ecosystem in the country.

Incidentally, Odisha is the lone state in the country where three species of crocodiles — saltwater, gharial, and mugger — are found in the river systems.

The salt-water crocodile population in Bhitarkanika has increased manifold from 96 in 1975 to 1,768 so far, according to the census report released in January.

Adequate conservation measures by the Forest Department have led to a systematic rise in the number of these reptiles over the years, the official said.