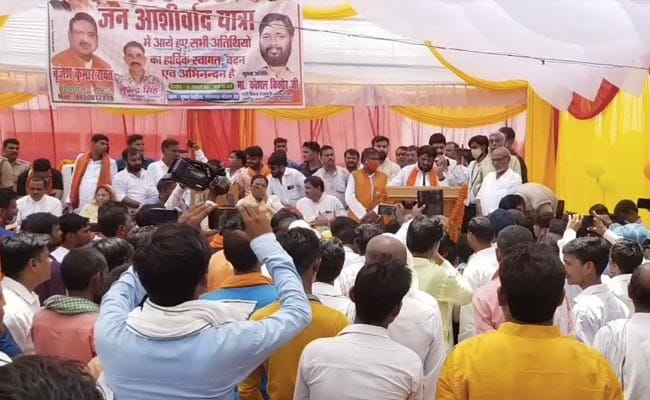 The rallies — scheduled from several parts of the country — are being held amid the Covid pandemic.

The BJP started a series of rallies today that will cut across 22 states over the next week to introduce Prime Minister Narendra Modi’s new ministers to the people. Thirty-nine ministers who were inducted in the cabinet last month are taking part in the “Jan Ashirwad Yatra”, which will cover 19,567 km across 212 Lok Sabha seats.

The rally, however, is especially important for the party in Uttar Pradesh, where crucial state polls are due in just a few months.

Seven ministers from Uttar Pradesh are taking part in the rally. They were picked to reflect the party’s caste and regional priorities before the assembly election, in which the Yogi Adityanath government is seeking a second term.

Three of the new ministers are from Other Backward Castes, three are from the Scheduled Castes and one is a Brahmin.

“The facilities our government has given in Uttar Pradesh, the SP and BSP governments have never given… We want the blessings of the people so we can continue to provide them with all these facilities,” Kaushal Kishor, the new minister of state for Housing and Urban Affairs, told NDTV.

Mr Kishor — a two-time MP from the reserved Mohanlal Ganj seat near Lucknow — who heads the state party’s SC/ST wing, is seen as the party’s Pasi face in UP.

Pasis are the second largest Scheduled Caste community in Uttar Pradesh after the Jatavs, who are traditionally seen to be voters of Mayawati’s BSP.

The rallies — scheduled from several parts of the country — are being held amid the Covid pandemic. but safety protocol is being disregarded in most places. Asked about it, Ashish Bajpai, a BJP leader in Uttar Pradesh, attributed to the good work of PM Modi and Chief Minister Yogi Adityanath.

“We have tried to maintain social distancing in seating and also tried to get everyone to mask up. But people seem to think nothing will happen to them. Modi and Yogi have worked so well, people have stopped fearing (Covid) but we are trying our best to supply masks, sanitsers and enforce social distancing,” Mr Bajpai said.

Mo safety protocols are being followed either In Tamil Nadu’s Coimbatore, where Union Minister L Murugan is leading the rally.

Mr Murugan, a former state BJP chief from the Scheduled Castes, is carrying the BJP’s hopes for the local body polls coming up in Tamil Nadu. The party is hoping to build itself up from the grassroots after ally AIADMK’s crushing defeat in the assembly elections held earlier this year.

“After securing people’s votes by cheating with impossible promises, now they say it is not possible… The DMK government is backtracking,” said Mr Murugan, who is the junior minister for Fisheries and Information and Broadcasting.

Similar processions have been held in the national capital Delhi too, led by two high profile ministers — Hardeep Puri, who was elevated to cabinet rank this time and Meenakshi Lekhi, the junior foreign minister.