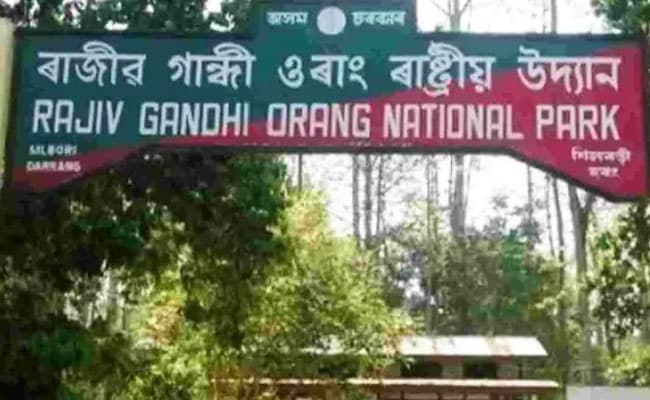 The national park was named after Rajiv Gandhi in 2001 by the Tarun Gogoi government.

The Congress and the BJP are at odds in Assam after yesterday’s state cabinet decision to remove former Prime Minister Rajiv Gandhi’s name from a national park in Assam. On Wednesday, the Assam cabinet passed a resolution to rename Rajiv Gandhi National Park at Orang to Orang National Park.

The Assam BJP has attacked the Congress, questioning the number of institutions named after the party’s Nehru-Gandhi family and whether the people of India would have accepted if the Taj Mahal or the Qutub Minar was named after them. The Congress has hit back saying the actions reeked of pettiness.

“It was a long pending demand that Orang National Park should get back its original name so after this cabinet decision, people are largely happy but only the Congress and some of its leaders like Gaurav Gogoi are unhappy. Each and everything of this country, should be named after one dynasty? Will people like it if the Taj Mahal and Qutub Minar were named after Sonia and Rajiv Gandhi? We have deep respect for the former Prime Minister but people are happy here with the name change,” Pabitra Margherita, BJP spokesperson, said.

Congress Spokesperson Bobbeeta Sarma said, “I think these are actions of petty minds. Removing his name, cannot take away his contributions for the country, for Assam. We all know that Rajiv Gandhi was behind the Assam accord to bring peace [to the state]. He made an elected Congress government resign in those days to give in to the regional aspirations of the people of Assam. Can you imagine a BJP Prime Minister doing this? They will never do.”

Covering an area of 79.28 sq km, the tiger reserve at Orang was declared a wildlife sanctuary in 1985 and was upgraded to a national park in 1999. A proposal to rename the wildlife sanctuary after Rajiv Gandhi was floated in 1992 but did not go through because of resistance. It was formally renamed the Rajiv Gandhi National Park in 2001 by the Tarun Gogoi government of the Congress.