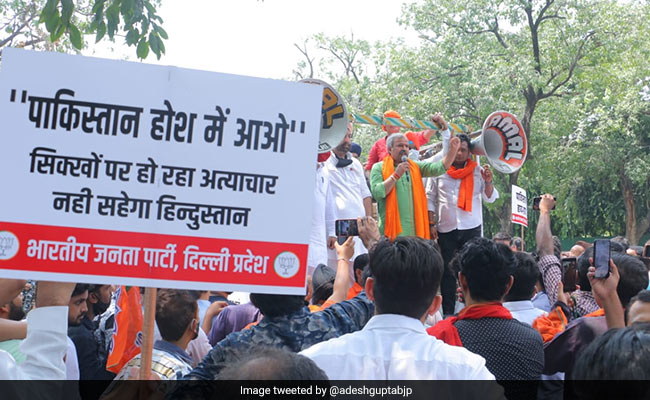 The BJP and its frontal organisations staged a protest near the Pakistan High Commission here on Wednesday against the vandalisation of a statue of Maharaja Ranjit Singh in the neighbouring country.

The protesters including leaders and workers of Yuva Morcha, Purvanchal Morcha and Sikh Cell of the Delhi unit of the Bharatiya Janata Party (BJP) raised slogans against Pakistan Prime Minister Imran Khan demanding his apology.

The protesters gathered at Teen Murti area of diplomatic enclave Chanakya Puri were stopped by the police at a barricade near Pakistan High Commission compound.

“We are demanding not just an apology from Khan but also asking for his assurance to stop persecution of Hindus and Sikhs and desecration of their shrines and idols. The Pakistan government must also apologise and install a grand statue of Maharaja Ranjit Singh where it was demolished in Lahore,” said Delhi BJP media cell head Navin Kumar.

The nine-feet tall cold bronze statue of the first Sikh ruler Maharaja Ranjit Singh was vandalised on Tuesday at the Lahore Fort in Pakistan”s Punjab province.

India has slammed Pakistan following the vandalisation of the statue, saying Islamabad has completely failed in its duty to prevent such attacks which are creating a “climate of fear” among the minority communities.

<!-- -->The Whisky Exchange has a catalogue of over 10,000 products. (Representational)London: London-based Indian-origin entrepreneur brothers Sukhinder and Rajbir Singh have agreed to...
Read more
Latest Stories

<!-- -->Centre's petition said the vaccine policy is based on experts' opinion and clinical trials. FileKochi: The Centre today filed an appeal in...
Read more

<!-- -->Washington: The Quad partnership is on track to produce at least a billion vaccine doses in India by 2022, US President Joe...
Read more
Load more