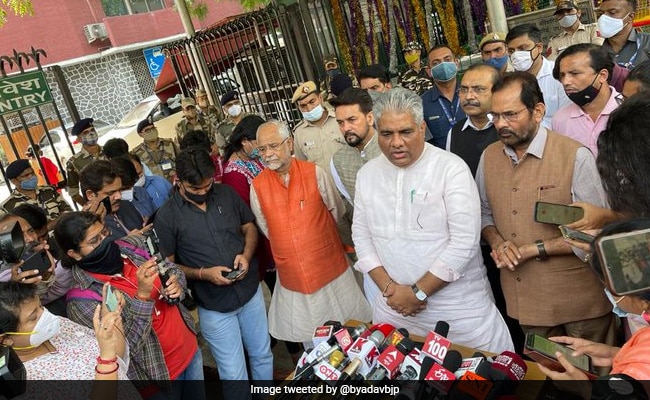 Local state police or home guards should not be given any poll duty, urged the BJP

Ahead of the crucial bypoll in Bhabanipur, from where West Bengal Chief Minister Mamata Banerjee is contesting, a BJP delegation met the Election Commission on Tuesday and sought a series of measures to ensure free and fair elections as it accused the Trinamool Congress of using violence against its supporters.

The BJP urged the EC to impose Section 144, a prohibitory order against gathering of five or more persons, on September 30, the polling date, and deployment of central forces for its compliance.

Union ministers Bhupender Yadav, Anurag Thakur and Mukhtar Abbas Naqvi were among the members of the delegation that met the EC.

Mr Yadav hit out at the Trinamool government in the state and accused it of resorting to violence to target its rivals and referred to the alleged attack on its leader Dilip Ghosh by Trinamool workers to slam the party.

In its submission to the EC, the BJP has also demanded that patrolling be intensified and area domination by security forces done.

It has also sought deployment of at least 40 companies of central armed police forces in Bhabanipur to ensure that every booth is covered by them.

Local state police or home guards should not be given any poll duty, it said.

The Commission must issue appeals to the general public and particularly the voters of the area of the steps that it has taken to ensure safety of voters and arrangements made for a fair poll as they needed to be reassured of their safety, it said.

Citing the COVID-19 situation and cases of post-poll violence against political workers in the state, the BJP has also urged the Commission to ensure that no political party representative sits inside the booth.

Mr Yadav later tweeted, “Met EC officials along with party colleagues Anurag Thakur and Mukhtar Abbas Naqvi over Bhabanipur violence. The attack on Dilip Ghosh and other BJP workers is shameful. We demand strict action as Mamata Banerjee and TMC have no respect for democracy and the rule of law.”

<!-- -->Anupama has alleged that police filed an FIR in the matter 6 months after she lodged a complaintThiruvananthapuram: A 22-year-old woman in...
Read more
Latest Stories