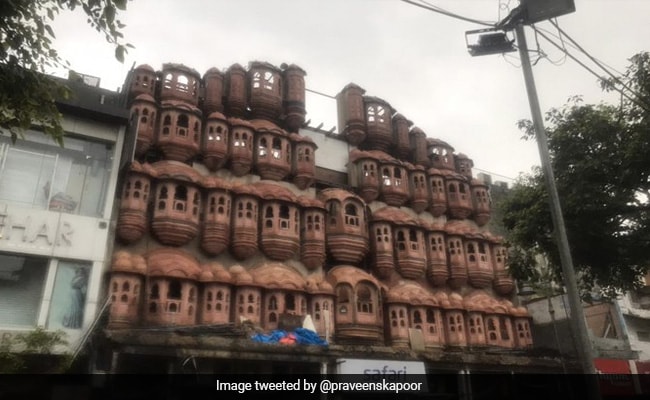 Delhi: The trader said it took him three years to build the facade that looks like Hawa Mahal.

A Delhi-based heritage textile trader from Rajasthan who had added a Hawa Mahal-like new facade to an old building in Chandni Chowk, was looking forward to inaugurate it on August 15, but instead it is being torn down in compliance with an order of the area’s civic body.

A senior official of the North Delhi Municipal Corporation (NDMC) on Thursday said the trader, Ankit Keyal, was given permission for repair and not fresh construction, hence, it is in “violation of the municipal norms”.

Mr Keyal, who hails from Jodhpur, and a trained architect, deals in heritage textile and handloom. He said his intention was to “promote heritage and culture of India and boost tourism”.

“It took me three years to build this facade. It may be reminiscent of the Hawa Mahal of Jaipur, but it actually draws inspiration from Mehrangarh Fort in my hometown Jodhpur. Rajasthani craftsmen had worked on it over the last three years, and the pieces made in fibre, cement and Plaster of Paris were brought from Rajasthan to Delhi and assembled,” he told PTI.

The trader, who has been working in Delhi for the last 10 years, said, “We had planned an official inauguration this Independence Day”.

“But, instead it is being demolished now,” said a dejected Mr Keyal, adding that he had poured his earnings into this facade project.

“We had issued orders to demolish the structure, and the trader himself is getting it dismantled since Wednesday, in compliance with the order,” the senior NDMC official said.

Mr Keyal, when asked whether he had discussed about the facade project with the NDMC officials, said, “No, I had not informed them”.

The NDMC official also said that “no representation” has been made from his side till date.

“First of all, it is Chandni Chowk area, nearby Red Fort, and there are restrictions on constructions from ASI authorities. Besides, as part of the work being done by the Shahjehanabad Redevelopment Corporation, facade refurbishment will come up in the next phase. So, the structure erected by him is not legally tenable,” the official said.

Mr Keyal said, the building, located in the recently pedestrianised stretch of Chandni Chowk, was taken on lease by him.

“All I wanted to do was to promote heritage and tourism, and compliment the work done in textile and handloom, to attract more people from India and abroad,” he rued.

“I and my family members are in deep agony over this issue, as we had built the facade with lot of love. Many other traders will now feel apprehensive to undertake similar projects and keep their facades flat and dull, even if they wish to add ornamental elements,” he added.

<!-- -->The ship is anchored several kilometers off the southern coast of Vancouver Island.Victoria, British Columbia: A container fire that broke out on...
Read more

J&K Should Be Given Full Statehood, Polls Should Be Held Soon: Congress’s Adhir Ranjan Chowdhury

<!-- -->The ship is anchored several kilometers off the southern coast of Vancouver Island.Victoria, British Columbia: A container fire that broke out on...
Read more