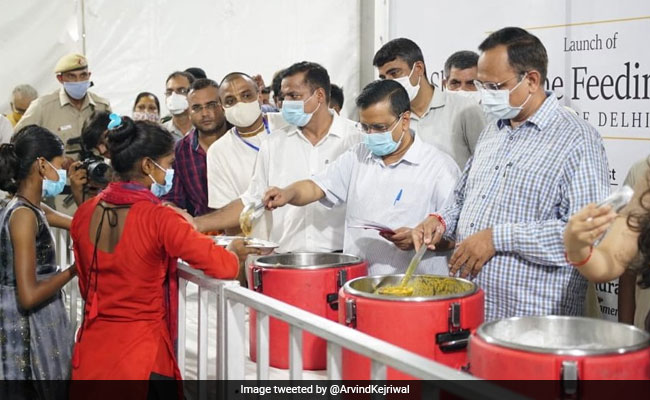 Akshaya Patra will provide cooked meals to the poor living in such shelter homes: Arvind Kejriwal

Delhi Chief Minister Arvind Kejriwal on Sunday launched a food distribution programme for the homeless living in government shelter homes across the city.

The programme to distribute free food was launched from a shelter home complex at Sarai Kale Khan in association with the Akshaya Patra Foundation – a non-government organisation.

Under the programme, the Delhi government along with Akshaya Patra Foundation will distribute free cooked meals to the homeless at all of its shelter homes across the city.

Addressing the gathering, Mr Kejriwal said the Delhi government runs 209 night shelters across the city and free cooked meals will be provided to nearly 6,000 people. This number will go up to 12,000 as more people live in shelter homes during winters.

“The poorest of the poor live in these shelters homes. They are not the vote bank of any party so no government paid attention to them. This is the first work of any responsible government to pay attention towards the poor.

“The Aam Aadmi Party (AAP) government is a responsible government and we have worked a lot for the poor. I am happy to start this initiative (free food distribution),” Mr Kejriwal said.

He added that earlier governments used to get scolded from the High Court for dismal condition of shelter homes but the AAP government worked a lot on this front to improve the situation of these homes.

The Chief Minister said Akshaya Patra will provide cooked meals to the poor living in such shelter homes.

“The real dharma is feeding the poor which Akshay Patra is doing. We are happy that free cooked meals will be distributed permanently at all Delhi shelter homes in association with Akshay Patra Foundation,” Mr Kejriwal said.

The Delhi Urban Shelter Improvement Board (DUSIB) runs 209 shelter home across the city that caters to nearly 12,000 people. The government has been providing free food to the homeless since the outbreak of COVID-19 pandemic in March 2020.

The event was presided by Madhu Pandit Dasa, Chairman, The Akshaya Patra Foundation, and Chanchalapathi Dasa, Vice-Chairman of the organisation. Delhi Urban Development Minister Satyendar Jain was also present on the occasion.

Mr Dasa said, “Akshaya Patra is conscious of its responsibility towards society. We have always strived to assist the government’s efforts to bring relief to people during emergencies. We will continue with this as long as we can.”

The event was followed by a ceremonial serving of meals to poor children at the shelter home complex.