Neeraj Chopra made history as the youngest Indian to win the Olympic gold and when not training, the javelin thrower likes to take his motorcycles out for a spin. We tell you more about it. 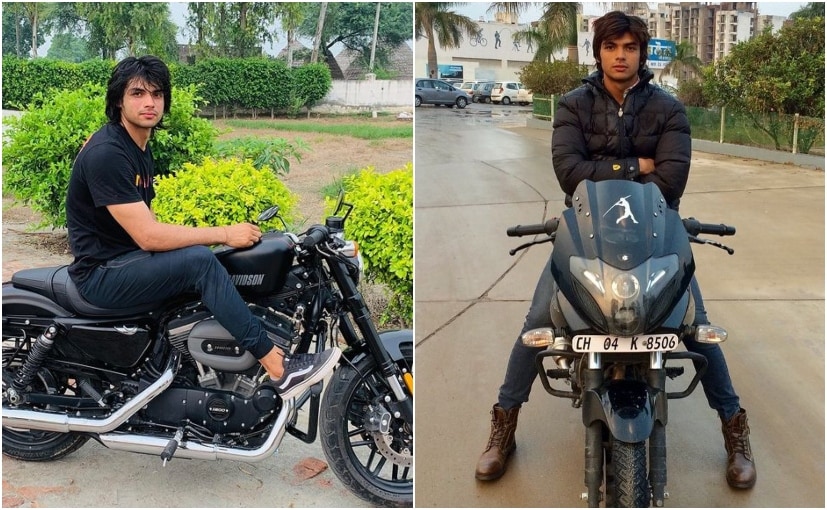 When athlete Neeraj Chopra threw the javelin in full force, India waited with bated breath to see how far it lands. And far enough it did land indeed! At 87.58 metres, it was far enough to land him the elusive gold medal. Neeraj became the first Indian Olympic gold medalist after 13 years, and the first one in track-and-field to do so in nearly 120 years. He is also the youngest Indian to win the Olympic gold at the age of 23. While you will be reading a lot about him in the days to come, here’s a small secret that you should, the Olympian is also an avid motorcyclist.

The son of a farmer from Khandra in Haryana’s Panipat district, Chopra’s liking for motorcycles is evident from his Instagram account. While there’s little to give away in the caption, but the frequent posts with his Bajaj Pulsar 220F are hard to miss. Clearly, every biker has been a fan of this Pulsar at some point, and this one continues to be a part of his garage.

But Chopra’s prized possession is his 2019 Harley-Davidson 1200 Roadster. He bought the American motorcycle as a gift for himself after winning the Asian Games that same year. The Harley remains tucked in his family home in Khandra for now, along with a tractor he bought the same year. The enthusiast certainly loves his machines and possibly throwing them around too. It will be interesting to see as to which bike he adds to his garage now after the Olympic victory.

And now, Chopra will soon add the upcoming Mahindra XUV700 to his garage. His monumental victory made Mahindra Group Chairman, Anand Mahindra, gift the athlete one. The M&M boss took to Twitter to announce the same. And possibly, it could be one of the first examples that will be handed over to the champion. The XUV700 is yet to see a global debut. It arrives on August 15, 2021, and will be the new flagship from Mahindra. Meanwhile, we’d really like to see a Jawa added to Chopra’s garage too. But that’s just the motorcyclist in us talking.