Home Trending News Divyanka Tripathi Has The Perfect Trick To Help You Get The Couch...
Trending News

Divyanka Tripathi Has The Perfect Trick To Help You Get The Couch All To Yourself. Sorry, Vivek 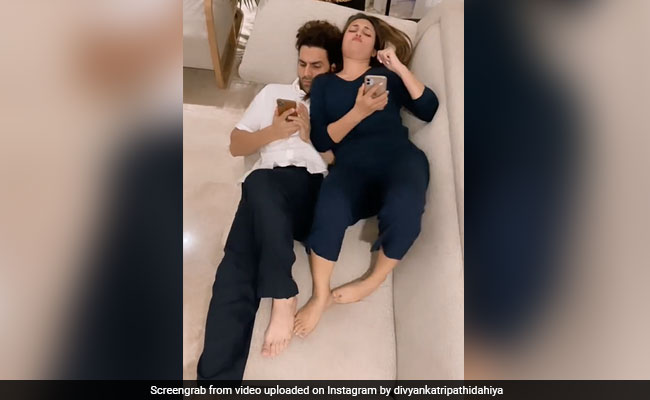 A still from the video Divyanka shared. (Image courtesy: divyankatripathidahiya)

Divyanka Tripathi Dahiya is a force to reckon with. When she is not moving us to tears with her acting chops, she is busy shocking us with some daredevil stunts on reality shows. And, when she is not doing any of this, she is busy teaching us some life lessons. On Wednesday, the actress shared one such important lesson when she showed us exactly how we can get the comfortable couch at home all to ourselves without our partners taking up any space. As expected, Divyanka’s husband Vivek Dahiya was gently but effectively pushed off the couch he was resting on, in a new Reels that the actress shared.

The clip begins with Vivek resting on the couch with his phone in hand. Soon enough, Divyanka Tripathi lands up on the couch, innocently laying down next to her husband. But before we know it, she manages to nudge and push Vivek off and takes up the entire space, much to his bewilderment. Sharing the hilarious clip, Divyanka wrote, “Make the right moves and claim your throne baby!” Well, we know a queen when we see one and Divyanka made sure she ruled Instagram with this Reels of the couple.

Reacting to the video, actress Shireen Mirza, who worked with Divyanka Tripathi and Vivek Dahiya in Yeh Hai Mohabbatein said, “Hahaha.” Fans and followers were quick to drop laughing and heart emojis in the comments section.

Both, Vivek and Divyanka, make sure to appear together in photos and videos on their social media platforms frequently much to their fans’ delight. Recently, when the couple took a trip to Gujarat, they gave their fans a peek into all the fun they had. Sharing a candid photo of the two engrossed in conversation, Divyanka Tripathi wrote, “Long conversations, good food and great pictures… Batao aur kya chahiye? (What else does one need?)”

Divyanka Tripathi also shared another picture that led to some cute banter between the couple. For the photo that features the two sharing a laugh, Divyanka chose the lyrics of a song from the film Rustom. She wrote, “Tere sang yaaraa…khushrang bahaaraa. Why do these filmy songs pop in my head when thinking of a caption?”

Well, Vivek Dahiya was ready with a cheeky answer to Divyanka’s innocent question. He wrote, “Because you’re standing next to a hero.” That’s a smart response, we have to admit.

<!-- -->Taapsee Pannu shared this photo. (Image courtesy: taapsee)HighlightsTaapsee shared a photo of herself on Sunday In the pic, Taapsee has her...
Read more