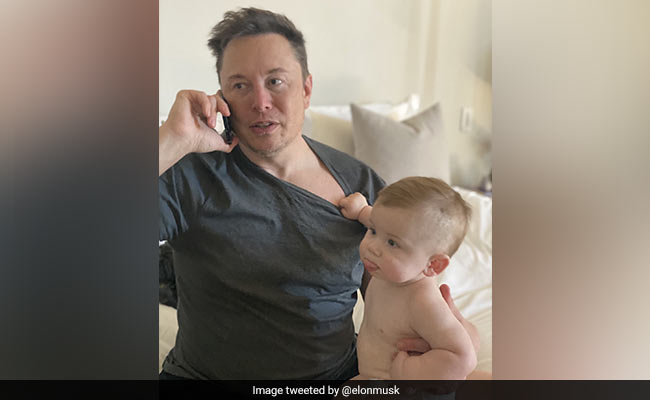 The past week has been a busy one for Elon Musk – what with appearing in court in the SolarCity trial and meeting Richard Branson before his space flight – but the Tesla chief did manage to take time out for some “light reading” with his son, X AE A-XII. Elon Musk, 50, took to Twitter yesterday to share a picture of his one-year-old son ‘reading’ a book on airplanes. Interestingly enough, the book is open to a page dedicated to Lockheed A-12 – the airplane that served as inspiration for the toddler’s unique name.

X AE A-XII is the son of Elon Musk and his partner, Canadian singer Grimes. He was born on May 4, 2020. At the time, Elon Musk and Grimes dominated the headlines for naming their son X AE A-12.  Later, they made a slight change in the numeral part of the name, which is now written in the Roman format.

“Some light reading with lil X,” wrote Mr Musk while sharing the picture on Twitter.

The picture has racked up over 1 lakh ‘likes’ and nearly 5,000 ‘retweets’, along with hundreds of comments.

“Gotta take him to the Air Force museum!” wrote one person in the comments section – to which the billionaire entrepreneur agreed.

“Yeah,” Elon Musk wrote in response to a Twitter user asking him if he used to fly Russian fighter jets.

Last year, Grimes had revealed on Twitter that the last part of her son’s name is a tribute to the Lockheed A-12, a precursor to the SR-71 Blackbird. Lockheed A-12 was a reconnaissance aircraft built for the United States Central Intelligence Agency by Lockheed’s Skunk Works.

Tokyo Olympics: Indian men's hockey team will compete for the bronze medal on Thursday.© AFPAiming to win a medal for the first time...
Read more

<!-- -->New Delhi: The Supreme Court will today hear a batch of petitions, including those filed by the Editors Guild of India, seeking...
Read more

<!-- -->New Delhi: The Supreme Court will today hear a batch of petitions, including those filed by the Editors Guild of India, seeking...
Read more