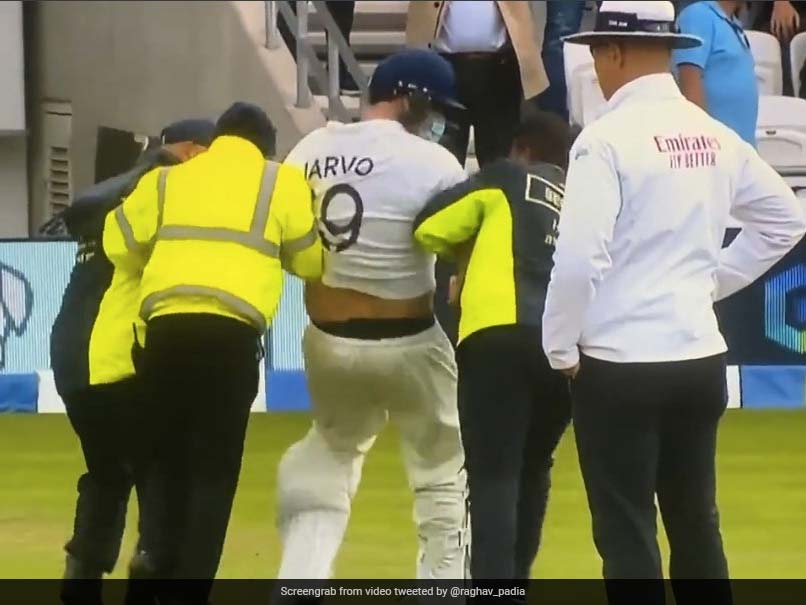 ENG vs IND: Security personnel had to escort “Jarvo” out of the ground after he invaded the pitch.© Twitter

Daniel Jarvis — also known as Jarvo — invaded the pitch again on the third day of the third Test between India and England in Leeds on Friday. The incident happened after India opener Rohit Sharma was dismissed. Jarvis walked in padded up as a batsman and looked to take strike before the security personnel rushed in and took him off. He had earlier walked in as a fielder of the Indian team in the second Test at the Lord’s Cricket Ground.

Watch “Jarvo” make his impact on the third Test here:

Coming back to the game, Rohit Sharma, Cheteshwar Pujara and Virat Kohli ensured that India displayed a spirited fightback on Friday.

Resuming the final session, India did not get off to an ideal start as Rohit (59) was sent back to the pavilion by Ollie Robinson. The right-handed batsman was given out on the field, however, he opted for a review, but the verdict came out to be umpire’s call, and hence, Rohit had to walk back to the pavilion.

Skipper Kohli then joined Pujara in the middle and the duo moved the scoreboard slowly and steadily. Both batsmen kept England’s attack at bay and in the end, ensured that India enter Day 4 with eight wickets in hand.

IPL 2021: Rishabh Pant has resumed training with Delhi Capitals.© TwitterDelhi Capitals players, who were part of the Indian squad for the Test...
Read more
Sports