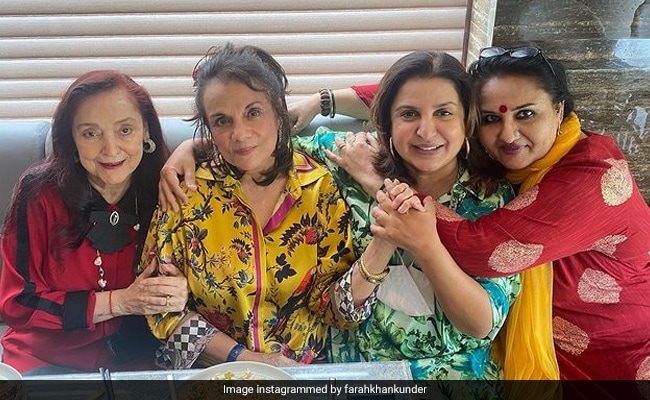 Filmmaker Farah Khan, on Saturday, had her “fan moment” as she bumped into the “icons of Bollywood” Mumtaz and Reena Roy at a restaurant. How we know this? Courtesy Farah Khan’s latest Instagram entry. The filmmaker was quick to get clicked with her “favourite ladies” after bumping into them and was even quicker to share her excitement with her Instafam through a new Instagram entry. The picture that she shared also features veteran actress Malika Randhawa. The picture features all four ladies smiling as they pose for the camera. Farah Khan poured her happiness in the caption of her post and wrote: “What joy to bump into my favourite ladies… #ICONS of Bollywood.. Mumtaz, Reena Roy and Malika Randhawa #fanmoment.” She added: “They hav such grace and joi de vivre.. n so full of fun.” Farah credited Malika Randhawa’s son, actor Shaad Randhawa, for clicking the picture. “Thank u Shaad Randhawa for leaving ur lunch n clicking our pics,” she wrote.

Farah Khan’s post prompted a barrage of comments from fans of all the actresses and the filmmaker. “All beauties in one frame,” a fan commented on Farah’s post.

Take a look at the aforementioned picture here:

Farah Khan has been quite active on Instagram in last few days. She recently met actor Govinda on the sets of a reality TV show and dropped a picture from her meet with the actor. “Cannot get more colourful than this!! The most talented of all Govinda in the house today,” she wrote in the caption of the post.

Earlier this week, Farah Khan, Anil Kapoor, Maheep Kapoor and Arbaaz Khan met for the shoot of the reality show Star Vs Food.

Here’s a picture from the sets of the show:

Farah Khan has been busy with several shoots these days. Last month, she directed an advertisement shoot featuring cricket legend MS Dhoni. Before that, she collaborated with actor Sonu Sood for the music video of the reprised version of the song Tum To Thehre Pardesi.

<!-- -->New Delhi: The Supreme Court will set up a committee to inquire into the Pegasus snooping row, it was revealed Thursday, with...
Read more

Realme UI 3.0 to Launch in October, Will Share Features With ColorOS 12

Realme UI 3.0 was announced on Wednesday as the latest version of the brand's flavour of Android, and it has been given...
Read more
Load more