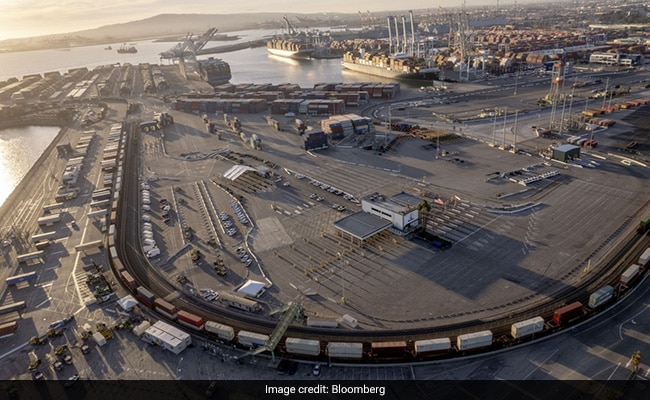 Shipping conditions should start to ease in early February, a trade economist said.

New Delhi: Last year the global economy came juddering to a halt. This year it got moving again, only to become stuck in one of history’s biggest traffic jams.

New indicators developed by Bloomberg Economics underscore the extremity of the problem, the world’s failure to find a quick fix, and how in some regions the Big Crunch of 2021 is still getting worse. 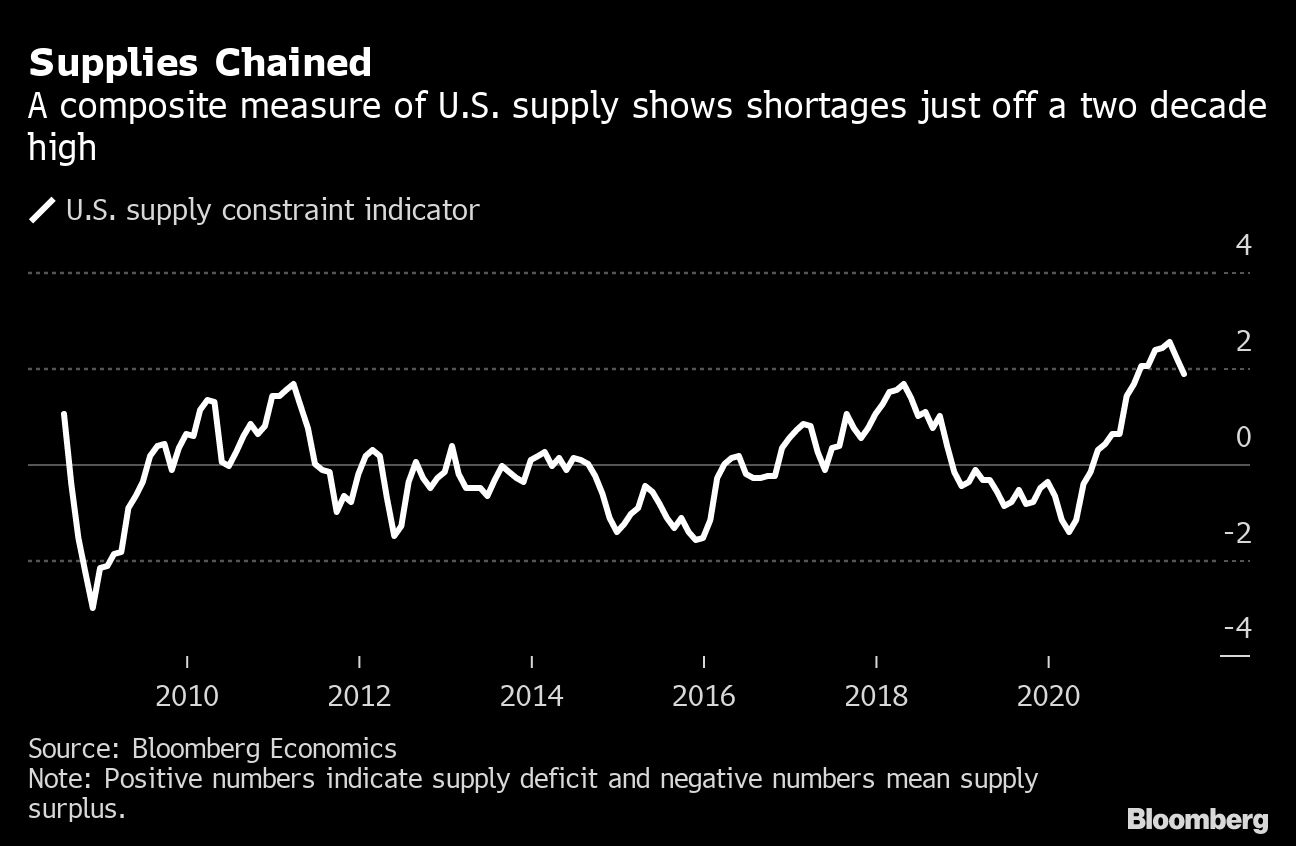 The research quantifies what’s apparent to the naked eye across much of the planet — in supermarkets with empty shelves, ports where ships are backed up far offshore, or car plants where output is held back by a lack of microchips. Looming over all of these: rising price tags on almost everything.

Central banks, already retreating from their view that inflation is “transitory,” may be forced to counter rising prices with earlier-than-expected interest-rate hikes. That poses new threats to an already stumbling recovery, and could take the air out of bubbly equity and property prices.

Behind the logjams lies a mix of overloaded transportation networks, shortages of labor at key chokepoints, and demand in the U.S. that’s been bolstered by pandemic stimulus and focused more on goods than services.

It’s not just a problem of moving stuff around. The world is still struggling to make enough stuff too.

Producers have been caught off-guard by this year’s rebound after they slashed orders of materials last year, when consumers stopped spending. 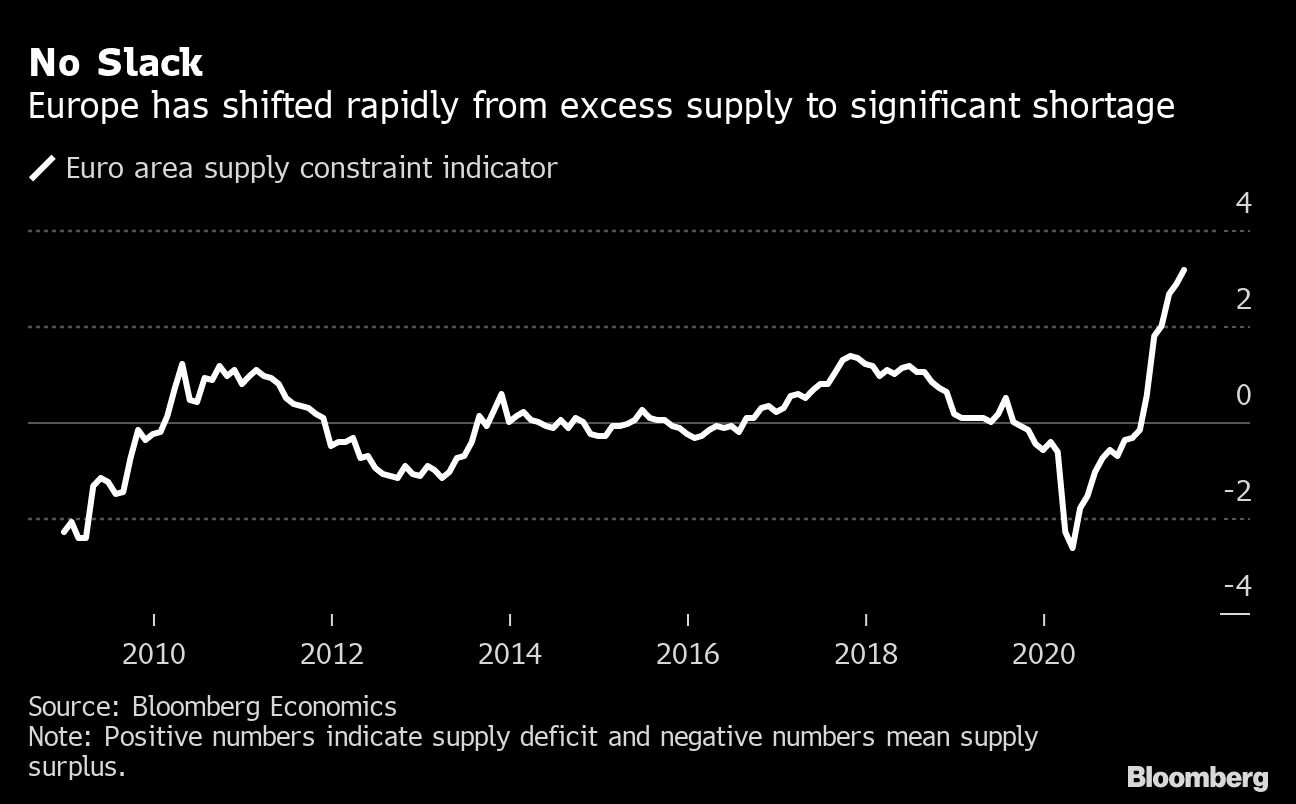 In Vietnam, plants that make Nike shoes had to scale back output because migrant workers had decamped to their home provinces out of fear of Covid-19. China, the world’s manufacturing powerhouse, is confronting new virus outbreaks and responding with targeted lockdowns. Its factory prices are rising at a 10% annual rate, the fastest since the 1990s.

Pulling all these pieces together, the Bloomberg Economics supply indexes show shortages just off a 20-year high in the U.S. Gauges for the U.K. and euro area are at a similarly elevated level.

The measures are based on a range of data, from factory gate prices to the ratio of inventory-to-sales for retailers, and the backlog of orders for service-sector firms. Readings of zero indicate normal conditions, negative ones mean goods are abundant, and positive points to constraints. The gauges show an abrupt shift from excess supply before the Covid crisis to today’s significant shortages. 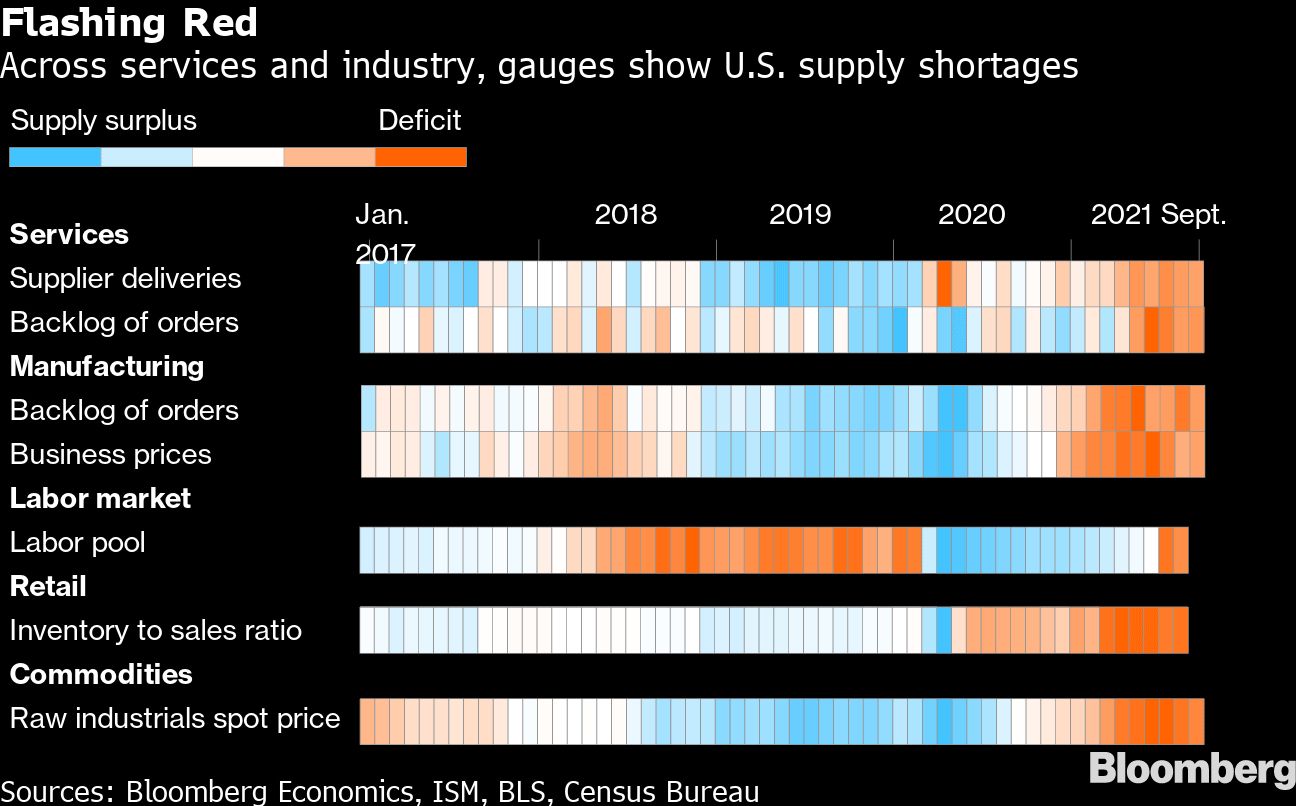 For global manufacturers like Toyota — which slashed September production by more than a third from 2020 levels as shortages stalled its famed just-in-time production process — as well as the firms that move their products around the globe, and the shoppers waiting for deliveries, the big question now is: when will the disruptions end?

Even giants like Amazon and Apple — used to bending supply chains to their will — don’t see the situation improving fast. Amazon said its entire fourth-quarter profit could be wiped out by a surge in the cost of labor and fulfillment. Apple said it lost $6 billion in sales because of inability to meet demand, and could lose more next quarter.

Shipping conditions should start to ease after the Chinese New Year in early February, “although disruptions could last at least till the middle of next year,” said Shanella Rajanayagam, a trade economist at HSBC. Even then, with pent-up demand and inventory restocking keeping the pressure on, Rajanayagam says it could still take some time for supply chains to fully disentangle.

What comes next is uncharted territory partly because of the sheer number of bottlenecks along the route from assembly lines to shopping baskets. As one supplier waits for another to deliver, the delays are feeding on each other.

Logistics systems usually ride the ups and downs of the global economy in a predictable pattern: Rising demand boosts trade, pushing shipping rates up and heralding good times for cargo carriers, until they over-build capacity and a bust follows.

But the pandemic has thrown that cycle out of whack. Even amid signs of slowing growth, the pipeline of international commerce has never been so clogged. 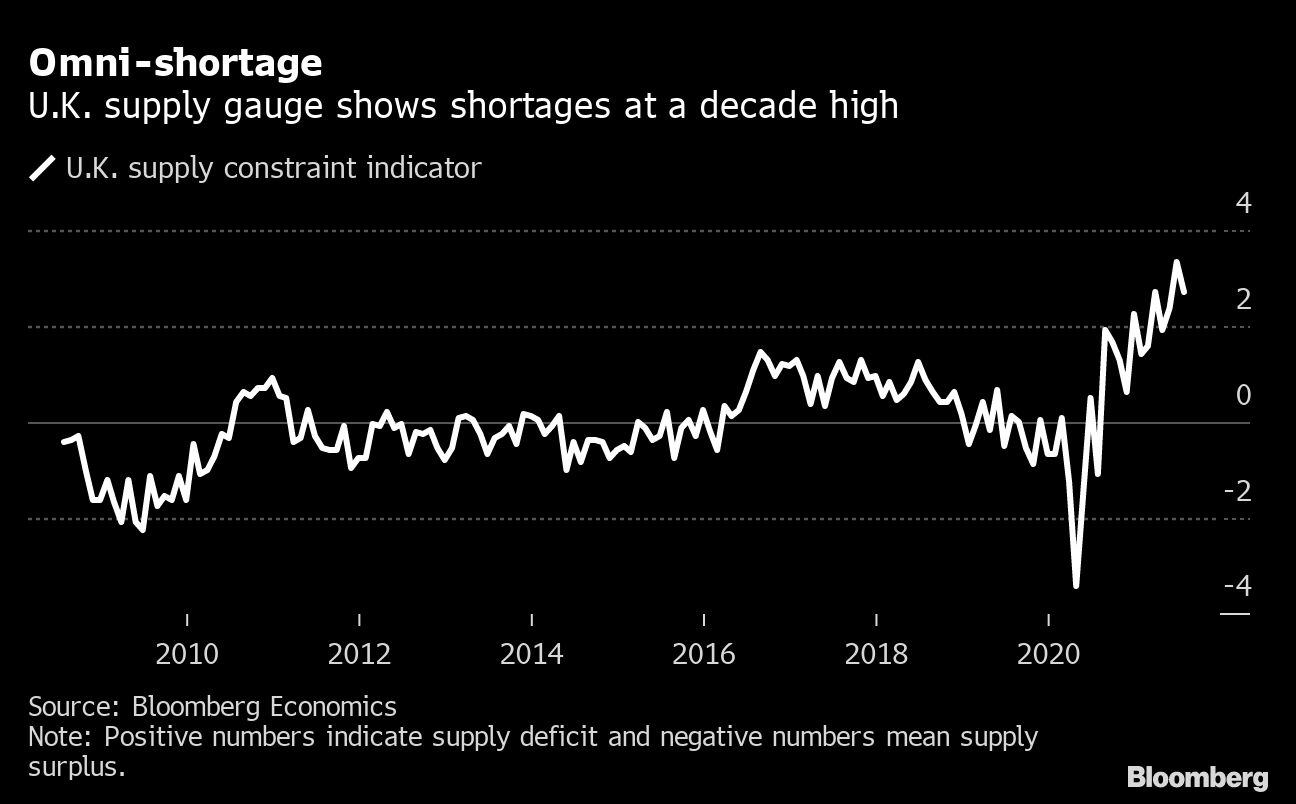 The more than 70 ships anchored off Los Angeles, for example, are loaded with enough 20-foot containers full of goods to stretch from Southern California to Chicago if laid end to end.

And even when those vessels get to dock, their payloads will only slam into the thousands already stuck in the ports waiting for a ride inland. That will require more truckers and trailers in the short run.

A longer-term fix means getting Covid-19 under control, building new infrastructure such as more efficient ports, and improving technology for digital transactions and faster communication.

Elsewhere in the world, shipping bottlenecks have often followed severe weather and virus outbreaks, like the recent Covid-19 flareup in Singapore. An analysis of port congestion showed the backlog Monday in that city-state center of finance and logistics was elevated, with 53 container ships at anchor, the highest count since Bloomberg started tracking the data in April.

That’s a problem for the U.S., where the clothes and home electronics that fill up shoppers’ carts rely on foreign inputs and assembly. And with vaccination rates in many Asian countries still low, it’s a problem that won’t disappear anytime soon. 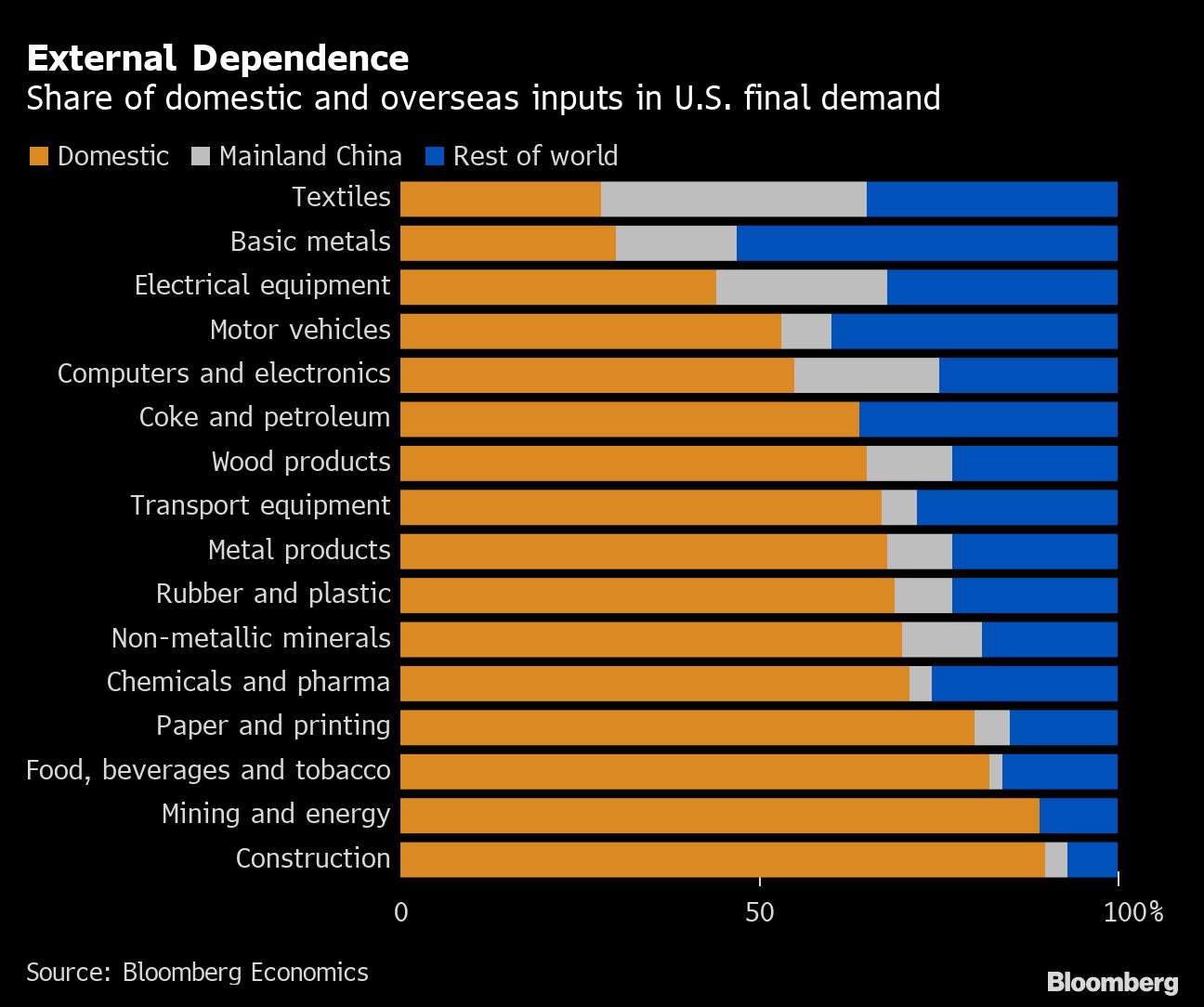 “For the supply chain to recover, it is going to require a certain amount of luck” — avoiding weather disasters or new Covid hotspots — “plus time and investment to add more logistics capacity,” said Simon Heaney, senior manager for container research at Drewry in London.

For a global economy exiting the deepest recession in recent history, supply shortages caused in part by strong demand are a good problem to have. Clearly worse would be the opposite one: abundant supply because economies remained depressed, with millions more unemployed.

But this least-bad option is still creating plenty of problems of its own. 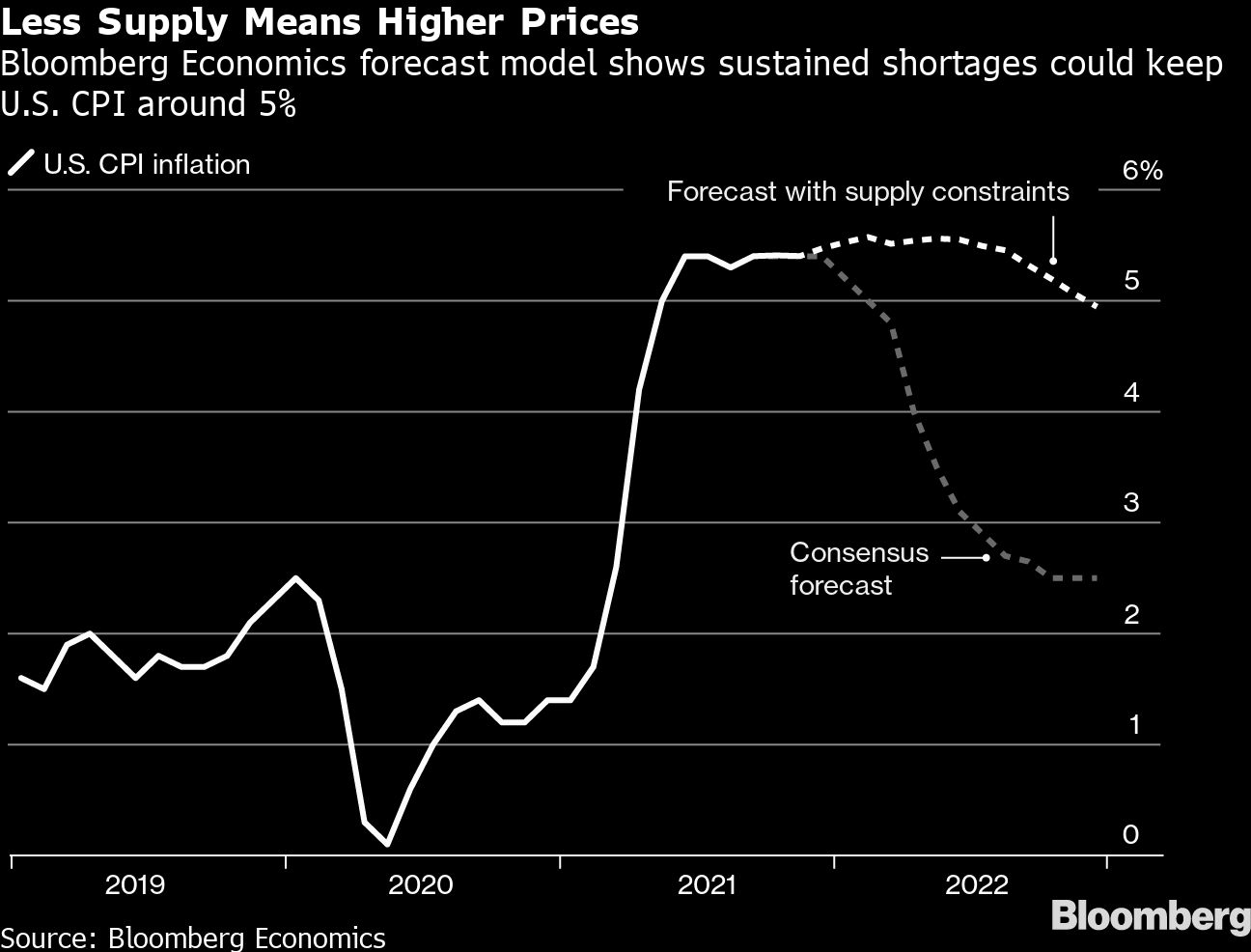 Inflation is already running high enough to be outside the comfort zone for monetary policy makers. In the U.S., it’s at 5.4% now and could stay lodged in the 4% to 5% range next year if supply constraints don’t ease, according to Bloomberg Economics models.

That doesn’t mean the world is in for a re-run of 1970s-style stagflation. It took a decade of overheating and policy missteps to drive U.S. inflation above 10% back then. The Fed and its peers are unlikely to make the same mistakes again. And unemployment is far below its 1970s peaks, and falling.

Still, the current environment — call it stagflation-lite — is a challenging one for central bankers.

Keeping rates at their current lows would allow the recovery to continue, but risk prices spiraling higher if households and businesses come to expect more of the same. Tightening would quell inflation not by addressing inadequate supply, but rather by stifling demand. It could turn into the monetary policy equivalent of the surgeon who declares: “Operation successful, patient dead.”

Traders are currently pricing in two Fed rate hikes in 2022, two more than the median member of the Federal Open Market Committee. A Bloomberg Economics model of the Fed’s reaction function — its policy response to changes in the economy — suggests that if inflation runs strong and unemployment falls, even two hikes next year might not be enough. 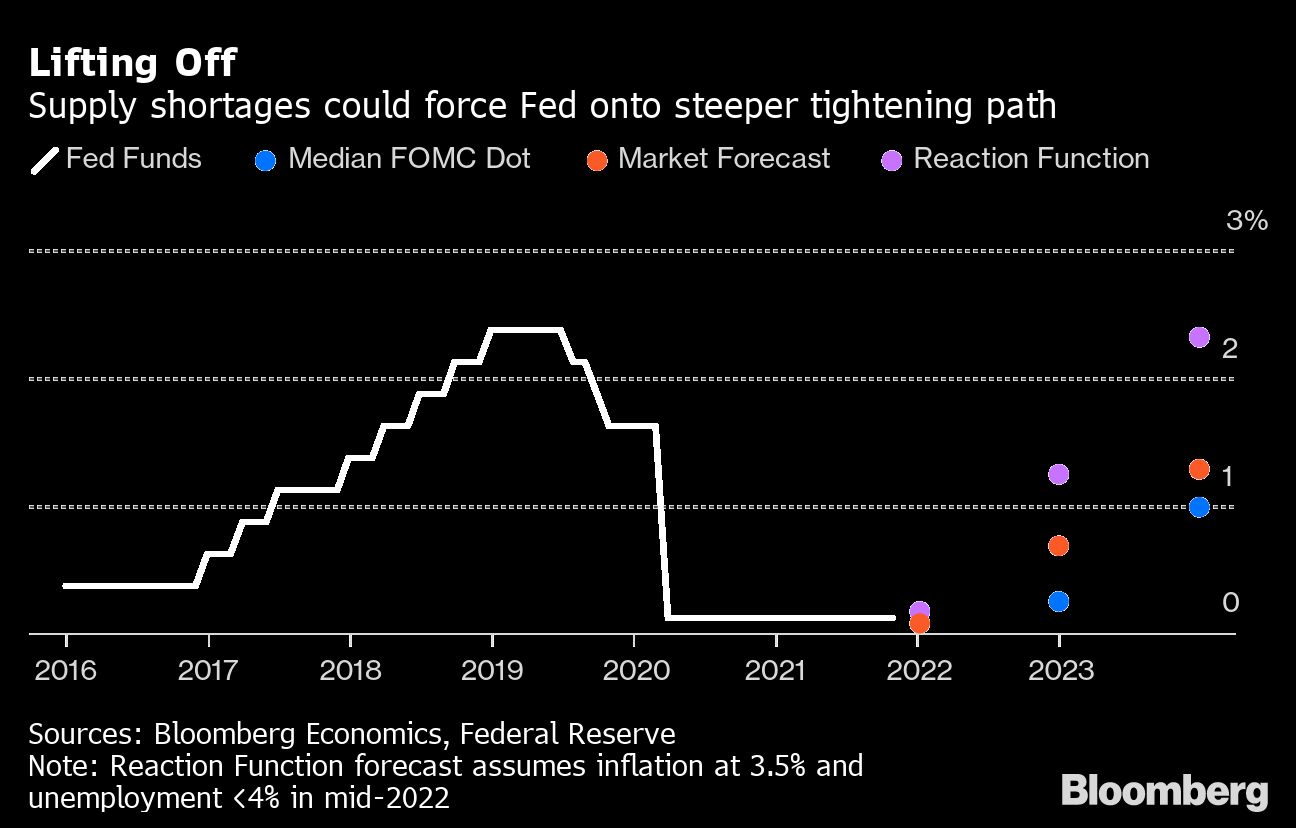 Of course, predictions of rapid monetary tightening have been consistently wrong in the past, and they could be again. Demand for goods might cool as pandemic stimulus fades or fears of tighter financial conditions erode confidence. A rotation of spending from goods back to services, already under way in the U.S., will lessen the imbalance between constrained supply and booming demand. A sustained slowdown in China might hit commodity prices.

And supply chains could unsnarl quicker than expected, too. The Bloomberg gauge of shortages in the U.S. has edged down in the latest readings — while staying at historically elevated levels. It’s just that there’s no precedent that sheds much light on when, or how, conditions will normalize.

“The current situation is unique and quite different from the more isolated disruptions the world has experienced,” said John Butler, president of the World Shipping Council, which represents the biggest ocean freight carriers. “The way in which the current congestion ultimately unwinds will also be different.”

<!-- -->Atrangi Re Song Chaka Chak: Sara in a still from the song. (Image courtesy: YouTube)HighlightsAtrangi Re is directed by Aanand L Rai...
Read more

Oppo Reno 7 series smartphones were recently launched in China. As per a fresh report, the Chinese tech giant will be launching two...
Read more

<!-- -->The patient is being tested for ''Omicron'' variant of the virus.Thane: A 32-year-old man who tested positive for coronavirus in Maharashtra's Thane...
Read more
Load more

Oppo Reno 7 series smartphones were recently launched in China. As per a fresh report, the Chinese tech giant will be launching two...
Read more