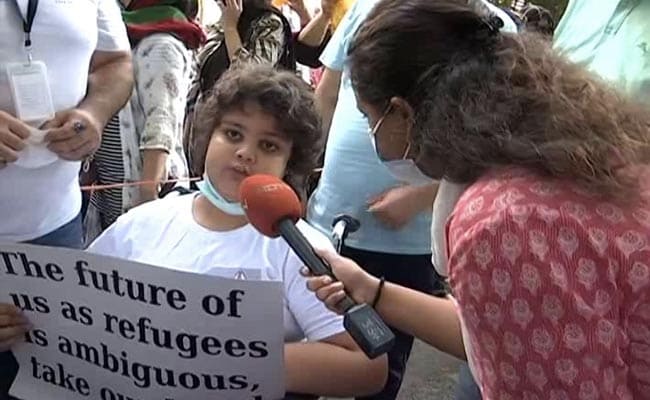 Nearly a hundred people gathered at Delhi’s Jantar Mantar this evening to express their solidarity with the Afghan community in the country as the Taliban seized control of Afghanistan.

With placards of “Save Afghan Women”, they sought to raise their voices for the women who are on the brink of losing their hard-earned rights.

Speaking to NDTV, one of the protesters Sadaf said, “I am here to raise my voice for the Afghan women who are in need. Their voices have been taken away by the Taliban. Whatever promises are made by the Taliban are all false. They are not allowed to work, not allowed to step out of the house without a man escorting them, they are kept as sex slaves, married forcibly. The children and women are the most vulnerable.”

“I feel lucky and grateful that India has given us shelter and a place to stay. My relatives are stuck in Afghanistan. So many have been displaced,” she said.

Even as the Taliban, at a press conference last week, reassured the world that they have changed, their message of moderation was contradicted by the protesters whose families remain stuck in Afghanistan.

Zara, an Afghan refugee living in Delhi, said, “My family is stuck in Kabul since last Sunday. Every day something new is happening. They (Taliban) are checking houses. People who have been working for 15-20 years with the US have been searched. This is their rule. If they find out someone is working with a foreign government, they will kill them.”

Speaking about the atrocities unleashed on her country by the militia, she said, “60% of our people have been working with the US because they have been in Afghanistan for a long time. The Taliban find out about the men and kill them. They then marry the women off or keep them for themselves and kill the children.”

“Every day I get news that either my neighbor has been shot or a relative is dead. How can someone sleep at night peacefully or keep a straight mind when you’re waiting for someone to knock on the door and come shoot you in the head?”

Last Thursday, an Afghan woman journalist said she was barred from working at her TV station after the Taliban took control of the country, and pleaded for help in a video posted online, reported news agency AFP. Wearing a hijab and showing her office card, well-known news anchor Shabnam Dawran said “our lives are under threat” in the clip on social media.

Many countries, including India, have opened their borders for Afghans desperate to escape another Taliban rule. India has announced a new category of electronic visas – “e-Emergency X-Misc Visa” – to fast-track applications from Afghans who wish to leave the Taliban-controlled country.

Thousands of people, desperate to flee the land-locked nation, have been thronging the Kabul Airport since August 15 after the Taliban seized the capital city.