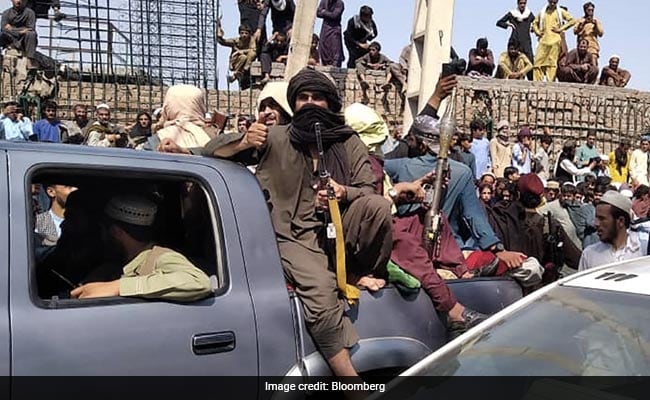 Just last month President Joe Biden defended his Afghanistan pullout by saying that “the likelihood there’s going to be the Taliban overrunning everything and owning the whole country is highly unlikely.”

The images of Taliban fighters inside the presidential palace in Kabul on Sunday, after a series of provincial capitals fell in rapid succession and the nation’s president fled, showed just how wrong Biden’s prediction has been.

Instead of an American-trained Afghan military staving off Taliban terrorists for months or longer, the U.S.’s longest war is ending with a hasty evacuation of diplomats from Kabul’s airport. Their sudden departure is raising difficult questions about Biden’s approach to the conflict, and creating a spiraling political calamity for a president who had promised to be a sure-handed steward of U.S. foreign policy.

Biden’s top aides fanned out across U.S. networks Monday morning to defend the withdrawal, saying the focus is now on securing Kabul’s airport and that Biden’s worst option would be sending troops back in to fight the Taliban.

National Security Advisor Jake Sullivan and his deputy, Jon Finer, said that the situation in Afghanistan had deteriorated faster than any analyst expected, and chided the Afghan army for being unwilling to slow the Taliban advance.

In an interview with ABC, Sullivan downplayed the impact of the withdrawal on U.S. counterterrorism efforts worldwide. “We can fight terrorism effectively without having a large military footprint on the ground,” he said. “What the president was not prepared to do was enter a third decade of conflict.”

Both Sullivan and Finer said they expected Biden to speak publicly on the matter soon, but didn’t specify when.

While Americans were left recalling the harried final days of Saigon at the end of the Vietnam War, the U.S.’s biggest adversaries saw a potent sign of America’s vulnerabilities and shaky claim to leadership after the tumult of the Trump years.

Even some close allies couldn’t hide their frustration.

“Nobody wants Afghanistan, once again, to be a breeding ground for terror,” U.K. Prime Minister Boris Johnson said Sunday. “It’s fair to say the U.S. decision to pull out has accelerated things.”

For Biden, the collapse was a punishing blow that may only worsen with time. The president had spent the early months of his administration basking in the glow of a ramped-up vaccination drive and budget and infrastructure deals meant to heal a struggling American economy.

The scenes out of Kabul will undermine those accomplishments.

“It couldn’t look any worse, and that will have an impact,” said Charles Lister, a senior fellow at the Middle East Institute. “It’s very easy to say, Donald Trump set us up for this and we’re just simply following through, but really any responsible leader who was listening to all of the advice he was getting would have taken a more measured approach.”

LOOK: The Al Jazeera network broadcast what it said were live images of armed Taliban fighters roaming the presidential palace and posing at desks.

The militant group said it plans to soon declare a new “Islamic Emirate of Afghanistan” https://t.co/0DXn7XEkeepic.twitter.com/604l4dX5f4

For all the flaws in the deal Trump signed with the Taliban last year — following talks in Qatar in which Afghan President Ashraf Ghani’s government was sidelined — Biden delayed the plan he inherited by just three months. Then his administration seemed caught off-guard when it became clear that Afghan translators and other allies who wanted to be evacuated weren’t going to be out of the country before U.S. troops left.

Domestically, the political outrage over Afghanistan’s fall from Republicans was predictable — many didn’t support Trump’s plans to withdraw, either — but Democrats were angry, too.

“Given the number of American lives lost and the number of soldiers who came back with life-changing injuries, it’s devastating to watch 20 years of U.S. support for the Afghanistan army amount to almost nothing,” Senator Chris Murphy of Connecticut said.

Senator Ben Sasse, a Nebraska Republican who often clashed with Trump, said it was a “shameful, Saigon-like abandonment of Kabul.”
‘Decided to Lose’

“History must be clear about this: American troops didn’t lose this war — Donald Trump and Joe Biden deliberately decided to lose,” Sasse added.

With 6,000 U.S. troops expected back in Afghanistan guarding its airport this week, Biden will have much to answer for, including: how could the U.S., with all its military might and intelligence infrastructure, so entirely fail to see how quickly the Taliban would take over the country? How could an Afghan military built up with more than $80 billion in U.S. taxpayer support collapse in just days?

After he announced his decision in April to withdraw forces by September, Biden said the U.S. would maintain an “over the horizon” capability to step back into Afghanistan if needed to counter terrorists.

But America’s mission in Afghanistan, realistically or not, was long pitched as being about more than going after the perpetrators of the Sept. 11 attacks.

Aid workers and contractors, backed by American and NATO military forces, poured billions of dollars into infrastructure projects and efforts to wean Afghan farmers off poppy production, the basis of the opium trade.

The foreign military presence also helped open up more space for girls and women, whose plight under the Taliban’s previous rule was roundly condemned and whose futures have never looked so precarious.

It was not just America’s longest war, but a costly one as well — four presidents in succession spent nearly $1 trillion on a far-off conflict that killed about 2,400 American soldiers, but none until now found a way to leave. In justifying his withdrawal, Biden said there was little to be gained from staying longer.

That was a perspective the Taliban knew they could capitalize on if they could sustain themselves. And over 20 years, they rebuilt themselves despite an American troop presence that swelled to 100,000 at one point.

In the end, the result was a U.S. government looking like it got outplayed by Taliban leaders who told them what they wanted to hear: we’ll stop killing Americans and you’ll get your troops out. Trump’s administration, in talks sealed by Secretary of State Michael Pompeo, agreed, and the deal was handed to Biden when he took office.

“Everyone’s passing around this burning bag of crap and if you didn’t set it down you didn’t have to acknowledge what it was,” said Jason Dempsey, an adjunct senior fellow at the Center for a New American Security who deployed twice to Afghanistan and once to Iraq. “The bright spot in this day of calamity is a president finally being willing to take ownership of a foreign policy failure even if it wasn’t his own design.”

But for the time being, as the Taliban reentered Kabul and President Ghani went into exile, one conclusion seemed hard to avoid: Biden’s administration mismanaged a withdrawal that was always going to be complicated.

Defense Secretary Lloyd Austin insisted in a briefing to lawmakers on Sunday that U.S. troops would’ve been attacked by the Taliban if they hadn’t withdrawn. But that only raised further questions about why the world’s most potent military was being run out of the country by less well-armed insurgents.

“Ultimately, there was a way to handle this withdrawal responsibly, slowly — helping and guiding the Afghan security forces that America built up over 20 years — but Biden chose the quicker route, having lost patience with this war,” said Madiha Afzal, a Rubenstein Fellow at the Brookings Institution. “That precipitousness served as the final straw, ending in what we have just witnessed, the rapid collapse of Afghanistan to the Taliban.”

India is home to some of the most delicious and diverse street food. From Varanasi's Tamatar chaat to Gujarat's Dabeli, Delhi's Chhole Bhature...
Read more

India is home to some of the most delicious and diverse street food. From Varanasi's Tamatar chaat to Gujarat's Dabeli, Delhi's Chhole Bhature...
Read more