In UP, Asaduddin Owaisi’s “Foolishness” Barb At Akhilesh Yadav, Mayawati 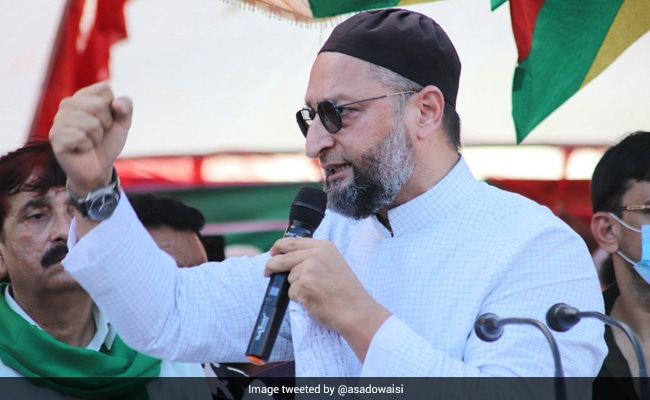 Narendra Modi became the prime minister of the country twice because of the foolishness of the Samajwadi Party and Bahujan Samaj Party chiefs, AIMIM president Asaduddin Owaisi asserted today.

He made the assertion in response to the two parties’ presidents, Akhilesh Yadav and Mayawati, earlier dubbing him as the “vote spoiler” for their parties.

Mr Owaisi made the claim while addressing a public rally during his ongoing tour of Uttar Pradesh, aimed at consolidating his electoral position months ahead of the assembly poll in the politically crucial state.

“Narendra Modi became the prime minister of the country twice because of the ”nasamjhi” (foolishness) of Akhilesh (Yadav) and Mayawati,” Mr Owaisi said, addressing a public meeting in Odara village of the Sultanpur district.

A day earlier, he had launched his party’s campaign for the upcoming state assembly elections in Ayodhya.

Sultanpur, situated about 140 km from the capital Lucknow, is believed to be built by Lord Rama’s son Kush.

Contesting the allegations that by fighting polls in UP, Mr Owaisi would spoil votes of the BJP’s rivals, the Hyderabad MP asked “when you all (Muslims) voted for Akhilesh Yadav’s party, how come a BJP candidate won from here in the last assembly polls?”

“Similarly, how did the BJP win the Sultanpur Lok Sabha seat in 2019 when no AIMIM candidate had contested from here?” he asked

Making a scathing attack on the Samajwadi Party president, Mr Owaisi asked, “Are Muslims your slaves?”

“The BJP did not win the two consecutive general elections in 2014 and 2019 with the Muslims votes as they got only six per cent of their votes in the two polls,” the AIMIM chief said, seeking to junk SP’s claim that Mr Owaisi was jumping into the UP poll fray to eat into their votes and to help the saffron party.

The Hyderabad MP said his party has been contesting elections across the country to safeguard Muslims’ interest and pointed to their victory at three Lok Sabha seats of Hyderabad, Aurangabad in Maharashtra and Kishanganj in Bihar in the 2019 election.

“We defeated BJP in Hyderabad, despite Modi and Amit Shah making several trips to drum up support for the saffron party,” the four-time MP said.

Seeking to establish rapport with Muslim voters, the AIMIM leader said he wants the minority community to have a strong voice in the state assemblies and Parliament to champion their cause.

“SP and BSP have only sucked your blood,” he alleged.

Taking a dig at UP Chief Minister Yogi Adityanath, he said, “The Centre had provided Rs 116 crore for the welfare of minorities in UP but he has spent only Rs 10 crore out of it.”

“I had raised the issue in Parliament while Akhilesh maintained silence over the issue,” he said.

Mr Owaisi, who has announced that the All India Majlis-e-Ittehad-ul-Muslimeen would contest 100 seats in the 2022 assembly elections, launched his poll campaign from Ayodhya on Tuesday.

Attacking the Samajwadi Party, Mr Owaisi alleged that Muslims have been “cheated” in the name of secularism and declared that he has come to Uttar Pradesh to defeat the BJP.

“Our first effort is that the Muslim leadership should be developed in the country’s biggest state Uttar Pradesh,” he said, starting his political campaign in the poll-bound state from Ayodhya on Tuesday.