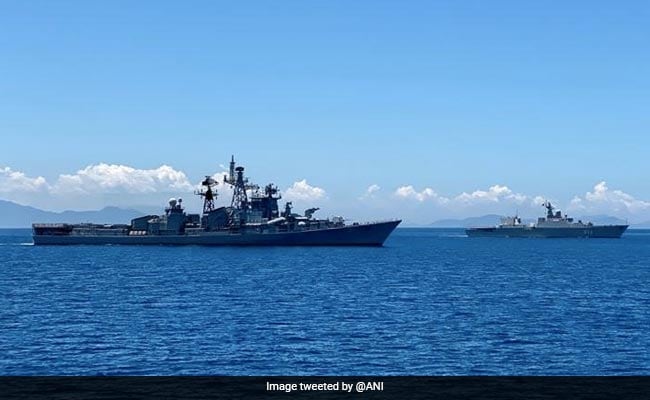 India on Monday carried out a naval exercise with the Philippines in the South China Sea, five days after it conducted a similar drill with Vietnam in the region that has been witnessing growing Chinese military expansionism.

While the Indian Navy deployed its guided missile destroyer INS Ranvijay and guided missile corvette INS Kora in the exercise, the Philippine Navy was represented by its frigate BRP Antonio Luna, officials said.

The Philippines government refers to the eastern parts of the South China Sea as the West Philippine Sea.

The Indian and Vietnamese navies carried out a naval exercise in the South China Sea on August 18.

“Two ships of the Indian Navy, INS Ranvijay and INS Kora, on deployment to the Western Pacific, carried out a maritime partnership exercise with BRP Antonio Luna of the Philippine Navy on Monday in the West Philippine Sea,” Indian Navy Spokesperson Commander Vivek Madhwal said.

“The joint evolutions conducted during the exercise included several operational manoeuvers and the participating ships of both navies were satisfied with the consolidation of interoperability achieved through this operational interaction at sea,” he said.

China claims sovereignty over all of the South China Sea, a huge source of hydrocarbons. However, several ASEAN member countries, including Vietnam, the Philippines and Brunei, have counterclaims.

“Both navies remain committed to further strengthening bilateral collaboration in the maritime domain towards a collective aim of ensuring a stable, peaceful and prosperous Indo-Pacific,” the Indian Navy spokesperson said.

The two Indian naval ships are currently deployed to the Western Pacific with an aim to strengthen maritime security collaboration with partner nations.

“The interaction with BRP Antonio Luna was an enriching opportunity for the Indian Navy to consolidate its bilateral relations with the Philippine Navy,” Commander Madhwal said.

The defence and security cooperation between India and the Philippines is on an upswing in the last few years.