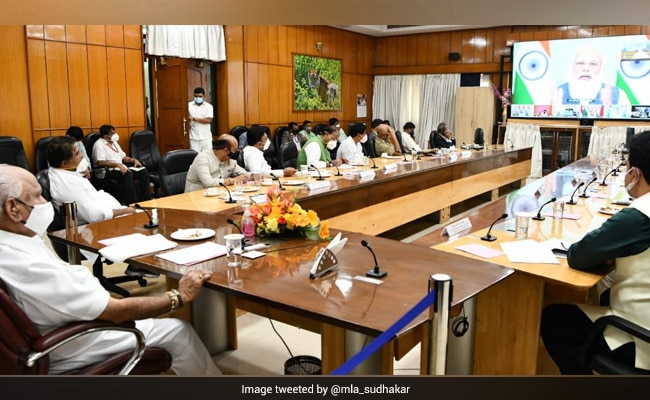 Dr Sudhakar had joined Chief Minister B S Yediyurappa in the virtual meeting of the Prime Minister with Chief Ministers of six states recording the highest number of Covid cases daily in the country.

Karnataka, Tamil Nadu, Andhra Pradesh, Odisha, Kerala and Maharashtra have contributed 80 per cent of new cases and 84 per cent of deaths in the past week, the Prime Minister said.

After the meeting, Dr K Sudhakar said, “He (PM) wanted to caution us. He wanted to tell all the state governments to be extra careful in implementing social congregations of all sorts. He has very clearly told us to be very careful, to increase vaccination and also concentrate on micro containment zones. These are the very specific things on which he has given us a direction.”

“He said the Union government would support and they have announced a package of Rs 23,000 crore for upgradation of health infrastructure. He said today it was better to invest this money in the rural health set-up, along with additional allocation from the state,” the minister added.

Joined CM @BSYBJP in the VC held by PM @narendramodi with CMs of various states to review the Covid-19 situation. PM was apprised about measures being taken to ensure preparedness for third wave including scaling up of critical care infrastructure and training of personnel. pic.twitter.com/yZRpVdV37a

Dr Sudhakar said the state was doing the best it can in managing the pandemic situation.

“The state is doing everything that is humanly possible. We are taking care of every precautionary measure,” he said. “We are also building out health infrastructure — physical infrastructure and also human personnel. We have hired almost 4,000 doctors. We have appointed more than 153 paediatricians and more than 200 doctors on contract.”

Karnataka was hit hard by the second wave of Covid infections, with people struggling to arrange oxygen cylinders, medicines and hospital beds.

“We have a buffer stock of the medicine because we faced several issues in the second wave,” Dr Sudhakar said. “Lessons have been learnt. Oxygen also, we have several plants already installed in the state. And through PM Cares and CSR initiatives, a lot of companies have come forward and they are supporting the state,” he said.

Amid concerns surrounding a drop in the pace of vaccination, the minister insisted that the programme was on track.

“We will be reaching 2.5 crores (doses administered) in a couple of days. We have said that by December, we will complete the vaccination,” he said.

“The PM has also given us the hope that more vaccine (doses) will be supplied to all the states in the coming weeks. From 40 per cent positivity, our state has reached 1.5 per cent. That is a very good message to the state. But at the same time, we have to be very cautious because we are unlocking,” Dr Sudhakar said.

<!-- -->The crime occurred in a yard of a building during the weekend.Zagreb, Croatia: A German tourist suspected of killing his dog with...
Read more
Load more