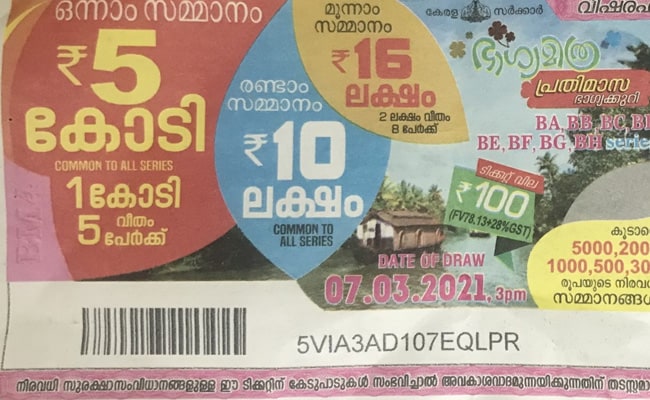 Bhagyamithra Lottery Result: Kerala Bhagyamithra lottery results (for BM6 series tickets) will be released today in the afternoon. The draw for this monthly lottery by the Directorate of Kerala State Lotteries will be held at Thiruvananthapuram and will live broadcast on Malayalam television stations. The Bhagyamithra lottery results will be released online after 4.30 pm at keralalotteries.com, the official website of the Kerala State Lotteries. This lottery carries a first prize of Rs 5 crore, which will be distributed among five ticket holders.

Bhagyamithra lottery tickets are sold for Rs 100 across the state and the sales will be stopped before the draw.

In Bhagyamithra lottery results, there is a second prize of Rs 10 lakh and Rs 16 lakh third prize — this will be given to 8 tickets, Rs 2 lakh each.

Last week, Kerala State Lotteries, a state government enterprises functioning under the Ministry of Finance, released the Sthree Sakthi lottery results, after it resumed the lottery operations which was postponed due to the lockdown restrictions announced in the state.

On Sunday, the state lotteries will release the Vishu bumper lottery results.

Apart from Bhagyamithra, Kerala Lotteries run draws for other state-run lotteries like WIN WIN, Nirmal, Akshaya, Sthree Sakthi, Karunya, and Karunya Plus. Due to the lockdown restrictions, the Kerala Lotteries ran three or four draws weekly earlier, however, the number of daily draws have been increased now.

The More You Sweat The More Fat You Lose- True Or Just A Myth? And More

<!-- -->Weight loss myths: Exercise cannot compensate for a bad dietHighlightsSweating is not related to the amount of fat you lose Your muscles will...
Read more

Tecno Pop 5P smartphone has launched as the latest offering by the company. It is up for grabs in Nigeria on the...
Read more
Load more