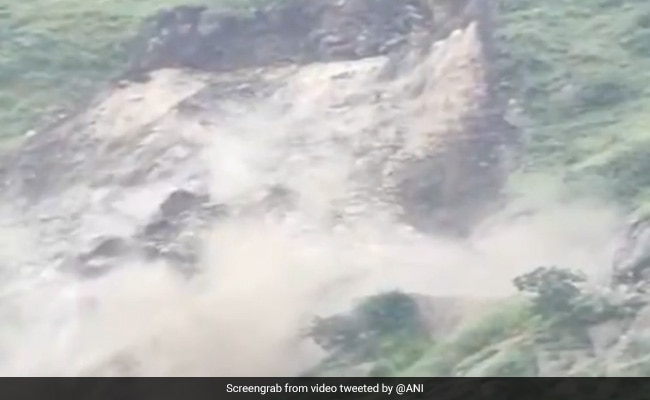 Himachal Pradesh has been recording heavy rainfall this Monsoon and this has also resulted in landslides.

A landslide in Shimla district of Himachal Pradesh has led to a block on the National Highway 5 that connects Firozpur in Punjab with Shipki La on the India-China border.

The state emergency operation centre said no loss of life or property has been reported in the landslide that took place at Jeori near Rampur.

A video shared by news agency ANI on social media shows a mass of land sliding down a slope. Boulders can be seen tumbling down the slope amid a cloud of dust. Some vehicles, it appears, had a narrow escape as they are seen right on the edge of the point where the landslide occurred.

#WATCH | Himachal Pradesh: NH-5 blocked due to a landslide near Shimla’s Jeori area. No human or property loss reported yet. District administration has deployed SDM, Rampur and a police team to assess the situation. pic.twitter.com/Dkxy24ex8I

“DPCR has informed that an incident of landslide occurred near Jeori- Sub-division Rampur District Shimla due to which NH-05 road has been blocked. No human or property loss reported by the Authority concerned yet,” the state emergency operation centre said in a bulletin.

The district administration has directed the Sub-Divisional Magistrate, Rampur, and a police team to assess the situation.

Himachal Pradesh has been recording spells of heavy rainfall during this Monsoon and this has also resulted in landslides.

A state-run bus, a truck and a few cars were trapped after the landslide blocked the Reckong Peo-Shimla highway.