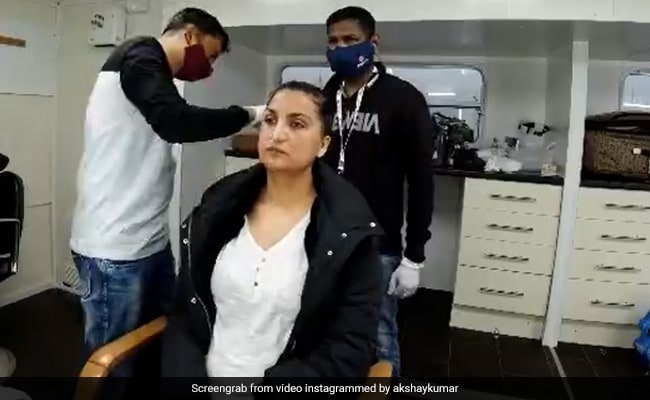 Lara Dutta in a still from BTS video (courtesy akshaykumar/)

Can we all agree that Lara Dutta was the surprise element in the Bell Bottom trailer? Bell Bottom is a spy thriller set in 1984, in which Lara Dutta portrays the role of former Prime Minister Indira Gandhi. Fans are still recuperating from witnessing Lara Dutta’s amazing onscreen transformation as the former Prime Minister in the trailer, when Akshay Kumar posted a behind-the-scenes video. In the jaw-dropping video, Lara Dutta can be seen being prepped for her onscreen look. “What bringing a character to life looks like… Lara Dutta, you’ve nailed it and how in Bell Bottom,” Akshay wrote in his shout out for his co-star.

Lara Dutta, who entered the make-up room as herself and exited as Indira Gandhi, says in the video: “Of all the people who are really, really responsible between all of this happening, I’m only being able to bring a character alive, if I can get into the skin of it. Super happy, I think the shoot went really well. I can’t wait to see it on screen.”

What bringing a character to life looks like…@LaraDutta you’ve nailed it and how in#BellBottom! Catch it on the big screen, also in 3D, on 19th Aug.@vashubhagnani@Vaaniofficial@humasqureshi@ranjit_tiwari@jackkybhagnani@honeybhagnani@poojafilmspic.twitter.com/2ElP6wsCLh

Within minutes of the trailer’s release on Tuesday, Lara Dutta found a top spot on Twitter, with netizens applauding her onscreen transformation. In a follow up post, Lara Dutta wrote: “The response to our trailer for Bell Bottom and the appreciation for the role of Mrs Indira Gandhi has been overwhelming and my heart is filled with gratitude. I’m so thankful for the faith that Akshay Kumar, Ranjit Tiwari, Jackky Bhagnani, Deepshikha Deshmukh and Pooja Entertainment had in me. “And I’d also like to thank and give full credit to Vikram Gaikwad and his team for the incredible prosthetics and make up!”

Bell Bottom was the first Bollywood movie to have started its shooting schedule at an international location after the nationwide lockdown last year. Directed by Ranjit M Tewari, Bell Bottom will release in cinemas on August 19.