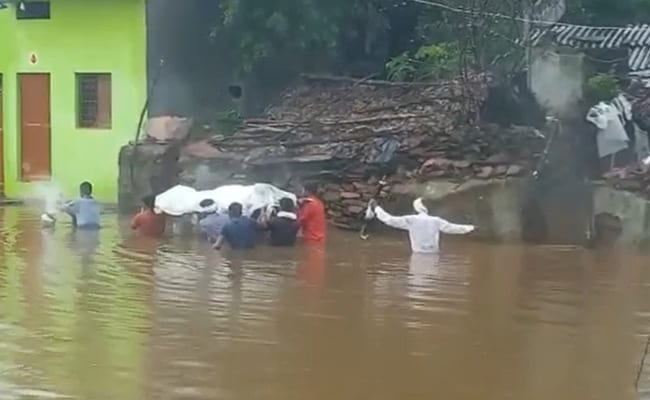 The video sparked criticism over the lack of development in Madhya Pradesh’s villages.

The ruinous conditions in northern Madhya Pradesh, created by devastating floods over the past many days, have been underscored in a recent video of a funeral procession in the state’s Guna district. It showed the final journey of a villager — after being delayed initially — through waist-deep waters.

The video, from Guna’s Bhadaura village, was recorded on Friday. It had the body of Kamarlal Shakyavar, who died on Friday, being carried by a handful of villagers to the cremation ground.

A funeral procession waded through waist height water to reach cremation ground in Guna around 1,250 villages are still reeling in the aftermath of floods the
death toll in the rain-related incidents in the flood-hit parts has risen to 24 @ndtv@ndtvindiapic.twitter.com/KBmCxK7J3J

His family and friends waited for hours for the water level to fall. When that didn’t happen, they decided to proceed and chose as pallbearers only those who could swim.

The video has by now been shared widely on social media, sparking shock and criticism, especially over the lack of development and non-existent basic facilities like all-weather roads. Bhadaura is only around 15 kilometres away from Guna.

Government schemes to improve the drainage systems and roads seem to have either been left unimplemented or ineffective, going by what the now-viral video has exposed.

The cremation ground used by Bhadaura residents was, however, not flooded, reports said.

Around 1,250 such villages are still struggling due to the floods triggered by torrential rains in Gwalior, Shivpuri, Guna, Sheopur, Datia, Ashoknagar, Bhind, and Morena. The number of people who have lost their lives has reached 24 between August 1 and 7.

Union Agriculture Minister Narendra Singh Tomar had to face massive protests yesterday by residents in Sheopur. They tried to block his motorcade, flung mud at it, and showed black flags. Some protesters also tried to shove Mr Tomar at the town’s main market.

<!-- -->PM Modi, Shashi Tharoor had said, should be praised "whenever he says or does the right thing".Telangana Congress chief's unparliamentary comments on...
Read more
Top Stories