Meetings With Rahul Gandhi As Congress Moves On To Chhattisgarh Problem 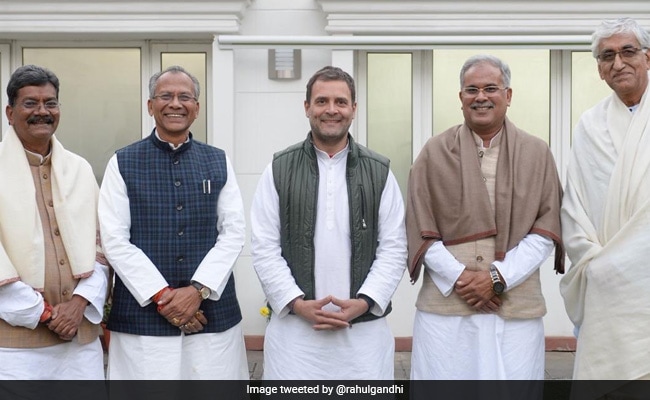 Bhupesh Baghel and TS Singh Deo have avoided spelling out their plans. (File)

Weeks after clamping a lid on a crisis in Punjab, the Congress is firefighting in Chhattisgarh, where Chief Minister Bhupesh Baghel’s minister TS Singh Deo has laid claim to the top post, demanding rotational chief ministership. Both Bhupesh Baghel and Chhattisgarh Health Minister TS Singh Deo will meet with Rahul Gandhi shortly as the infighting threatens to boil over.

Mr Baghel’s government completed two-and-a-half years in office in June. That is when Mr Deo and his supporters started pressing for change, insisting that rotational chief ministership was the deal when the party took power in December 2018.

Mr Deo claims he was promised he would take over as Chief Minister after Mr Baghel’s half-term.

Sources close to Mr Deo say he will not settle for anything less. If he’s not made Chhattisgarh Chief Minister, he will quit the government and maybe even the Congress, said sources. Mr Deo “won’t join the BJP” but can’t work under Mr Baghel anymore, they added.

“The situation is at a breaking point,” sources close to Mr Deo told NDTV.

Both Mr Baghel and Mr Deo have avoided spelling out their plans.

After winning the Chhattisgarh election in 2018, the Congress faced tough negotiations with chief ministerial contenders including Mr Deo and Tamradhwaj Sahu.

Finally, both were taken on as ministers when Mr Baghel took charge. Rahul Gandhi had tweeted a photo with the leaders, in a show of unity, with the message: “No matter how brilliant your mind or strategy, if you’re playing a solo game, you’ll always lose out to a team. – Reid Hoffman.”

No matter how brilliant your mind or strategy, if you’re playing a solo game, you’ll always lose out to a team.

But that picture no longer reflects the ground realities, like the other photos tweeted by Mr Gandhi at the time – with Kamal Nath and Jyotiraditya Scindia (Madhya Pradesh) and with Ashok Gehlot and Sachin Pilot (Rajasthan).

Reports, never confirmed, suggested the Chhattisgarh challengers had relented only when the Congress agreed to the formula of power-sharing between Mr Baghel and Mr Deo.

However, every time Mr Baghel has been asked about such a formula, he has said he will readily step down if the party leadership asks him to.