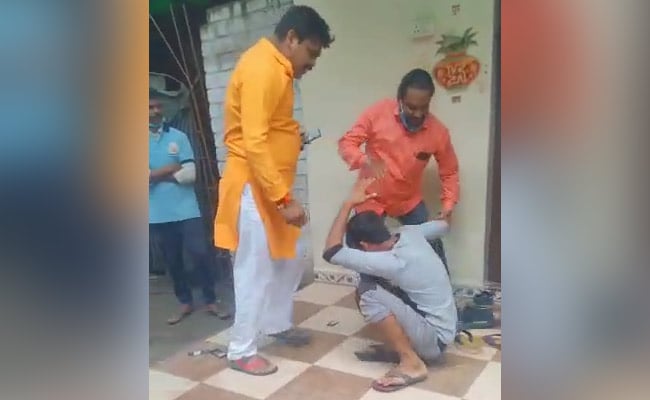 The incident took place on Sunday in Banganga area in Indore.

A 25-year-old man selling bangles was mercilessly beaten in full public view by a group of men, who also allegedly took away Rs 10,000 that he was carrying in Madhya Pradesh’s Indore on Sunday. A police case was registered late at night reportedly after hundreds of people gathered outside the police station demanding action against the accused.

Home Minister Narottam Mishra, quoting a police investigation, said that the victim was attacked after people realised that he was using a fake name to run his business.

In the video of the incident that has been circulating on social media, the victim, identified as Tasleem, is seen being beaten up by a group of men in a crowded street in the Banganga area in Indore. The unidentified men are heard using religious slurs at him as people around him watch – none of them interfere to help the victim.

“Take whatever you want. He should not be seen in this area anymore,” a man is heard saying as he takes out bangles from the bag. The man also asks the public to come forward and thrash the victim, who is seen being pulled up by his t-shirt by a man from behind.

“The accused first asked my name and started beating me once I revealed it. They also robbed the Rs 10,000 that I was carrying and vandalised bangles and other material that I had,” the victim said in his complaint to the police.

A case of rioting, assault, robbery, intimidation and trying to disturb communal harmony has been filed against unidentified men.

Asked about the incident, state Home Minister Narottam Mishra said: “It has been found that the victim used to sell bangles using a Hindu name. He had two Aadhaar cards under different. They have been recovered”.

The police have appealed to the people not to react to the social media posts on the incident.

“We have registered a case as per the complainant and are investigating but we would like to urge people not to react to social media posts that are communal nature, at times incidents that have nothing to do with Indore are ascribed to the city. We are also keeping a watch on such social media posts,” Ashutosh Bagri, a senior police officer in Indore East police station, said.

On Camera, Couple Forced To Dance With Tyres Around Necks For Eloping

When it comes to Indo-Chinese, there are endless food options we can try. From all things chilli to noodles, soups and stir-fries, there...
Read more

When it comes to Indo-Chinese, there are endless food options we can try. From all things chilli to noodles, soups and stir-fries, there...
Read more