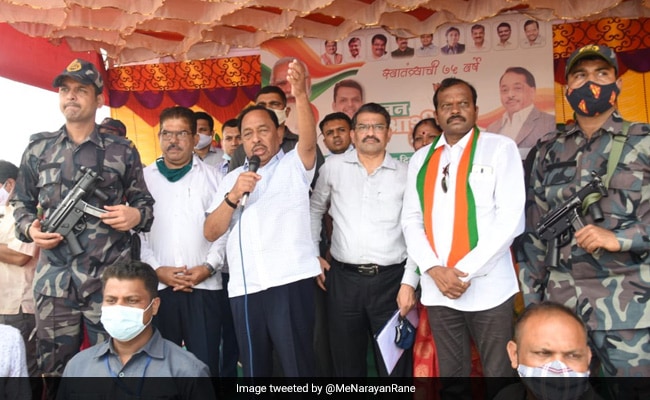 Union minister Narayan Rane will resume his ‘Jan Ashirwad Yatra‘ in Maharashtra in a couple of days, a close aide said today, a day after the BJP leader was arrested over his remarks against Chief Minister Uddhav Thackeray and later granted bail.

The route of Mr Rane’s tour will be the same and the date of its resumption will be conveyed soon, his aide Rajan Teli said in a statement, reported news agency Press Trust of India.

The BJP leader, who was recently inducted into the Union cabinet, began his yatra from Mumbai on August 19. The seven-day yatra was to conclude in Sindhudurg.

On Monday, during his yatra in Maharashtra’s Raigad, Narayan Rane sparked off a row over his remarks about “slapping” Chief Minister Thackeray for what he claimed as the latter’s ignorance of the year of India’s independence.

Four FIRs were registered against him in Maharashtra over his remarks, which triggered a political row and protests across the state on Tuesday.

Mr Rane was arrested on Tuesday afternoon from Ratnagiri district in the state and granted bail by a court at Mahad in Raigad late at night.

Share
Facebook
Twitter
Pinterest
WhatsApp
Previous articleFollows Indus Water Treaty, Says India After Pak Objects To Kiru Hydroelectric Plant Design in J&K
Next articleCheck Out This Exercise Routine That You Can Do At Home To Stay In Shape