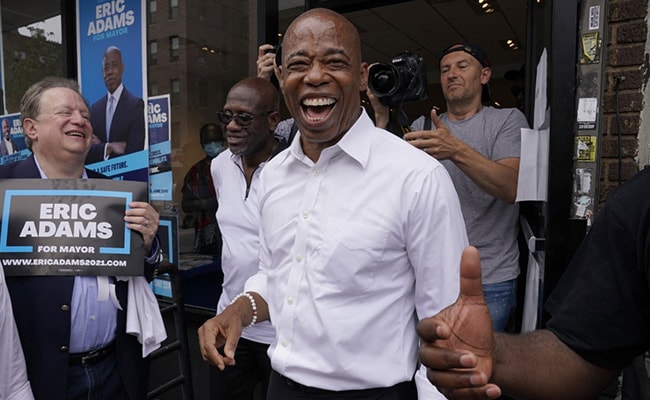 Eric Adams smiles during a event in Brooklyn, on the eve of New York City Primary Election Day.

US TV networks including NBC and CBS called the race for the 61-year-old centrist Democrat shortly after polls closed at 09:00 pm (0100 GMT Wednesday).

Adams had been the overwhelming favorite to defeat Republican rival and volunteer crime fighter Curtis Sliwa in the liberal-voting bastion where registered Democrats outnumber Republicans by seven to one.

Early unofficial results released by New York City’s Board of Elections suggested that Adams would win more than 70 percent of the votes.

Being New York’s mayor is often described as the most difficult job in the United States after president.

Adams’s win caps a remarkable rise for someone who was born in poverty in Brooklyn and worked for a gang as a teenager before a beating by police officers spurred his determination to reform the NYPD from within.

“Because I’m standing here, everyday New Yorkers are going to realize that they deserve the right to stand in the city also. This is for the little guy,” said Adams, wiping away tears outside a polling station after casting his vote.

As mayor for more than eight million people, he will oversee America’s largest municipal budget and its biggest police force and public school system.

Adams will be tasked with leading the city’s economic recovery after the pandemic, which has killed more than 34,000 residents and closed hundreds of thousands of businesses.

The moderate defeated progressive rivals in June’s Democratic primary by pledging to crack down on violent crime that soared during the pandemic.

He promised to tackle wealth inequalities and reform the education system, as well.

Adams will also have to grapple with a severe lack of affordable housing, violent chaos at the notorious Rikers Island prison and the effects of more extreme weather events on New York’s creaking infrastructure.

One of his trickiest balancing acts will be trying to reform police practices while keeping onside a heavily unionized force that feels it has been underappreciated during the de Blasio era.

Adams opposes defunding the police and has not called for higher taxes for wealthy residents, putting him at odds with the American left.

Born in 1960, Adams was raised in a large family living in a working-class neighborhood of Queens. His mother was a cleaner, and his father was a butcher.

Adams briefly ran errands for a gang as a teenager. When he was 15, he was beaten by two NYPD officers after they arrested him for criminal trespassing.

That sparked his determination to join the NYPD and he entered the force in the mid-1980s, serving 22 years and rising to become a captain.

In 1995, he co-founded “100 Blacks in Law Enforcement Who Care,” an advocacy group designed to fight against racism in the police and that still exists today.

In 2006, Adams retired and won election to the New York State Senate. He served until 2013, when he was elected Brooklyn borough president, providing a springboard for his mayoral ambitions.

Adams credits veganism with reversing his 2016 diabetes diagnosis and released a book last year that aims to turn African Americans to a plant-based diet.

Honor 60 has allegedly been spotted on Geekbench hinting that the smartphone will come equipped with the Qualcomm Snapdragon 778G+ SoC and...
Read more
Load more