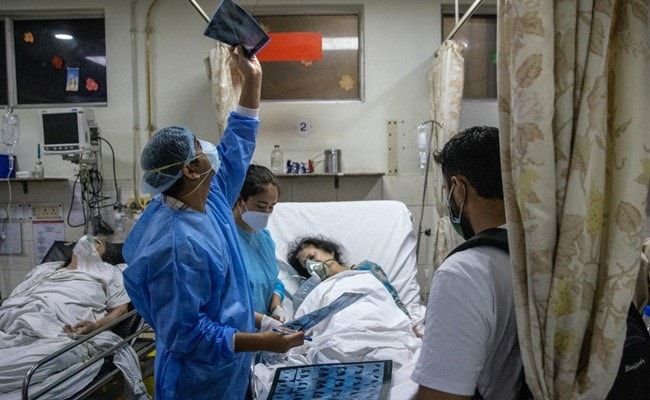 The shortage of medical oxygen had grappled the country at the peak of the second wave.

India saw a massive shortage of medical oxygen and hospital beds during the peak of the second Covid wave and many nations had come forward to help amid desperate appeals on social media and marathon court hearings. As the country sees a drop in daily cases and concerns grow over a third wave, the Union Health Ministry’s remark on Tuesday that “no deaths due to lack of oxygen have been specifically reported” by states or union territories has led to widespread criticism.

Oxygen shortage led to many deaths in country, including the national capital, Delhi Health Minister Satyendar Jain said today at a media briefing, hitting out at the government. “It’s completely false to say no one died due to oxygen crisis,” he stressed.

“They (the central government) might soon say that there was no pandemic. If there were no deaths due to oxygen, why were the hospitals approaching Delhi High Court. Everyday they were making desperate appeals.”

Courts across the country saw marathon hearings over the issue as patients and their families faced shortage and black-marketing of oxygen cylinders.

“In Delhi, we had set up an (audit) committee. If the panel was still there, the data could be provided easily. But the central government, via the Lieutenant Governor, didn’t allow it to submit the report,” Mr Jain insisted today.

The AAP government says it proposed the panel will offer Rs 5 lakh as compensation in such cases. However, Lieutenant Governor Anil Baijal told them that the centre had already set up a panel and another was not needed, the Arvind Kejriwal government said.

In a written reply to Rajya Sabha on Tuesday, Junior Health Minister Bharati Praveen Pawar said that health is a state subject and states and union territories regularly report the number of cases and deaths to the Centre. “However, no deaths due to lack of oxygen have been specifically reported by states and UTs,” added Ms Pawar, responding to the question on whether Covid patients died on roads and hospitals due to oxygen shortage.

Blaming the states, the country’s new Health Minister Mansukh Mandaviya further told the parliament: “Prime Minister repeatedly told the states…. deaths have to be registered, there’s no reason to hide. It’s the responsibility of the states. We keep a record of data provided by the states. That’s all the central government has to do.”

Shiv Sena’s Sanjay Raut today slammed the ruling BJP over the statements. “I am speechless. For families who’ve lost their loved ones due to the shortage of medical oxygen – how would they’ve felt on listening to this. These families should file a case against the government,” he told reporters today.

In Delhi, 25 people had died in April at the Jaipur Golden Hospital. Twenty-three-year-old Gaurav Gera and his sister Bharti lost both their parents in the tragedy – 42-year-old mother and 49-year-old father.

“We were pained to hear the government’s statements in the parliament. My father was fine. In the night, we got a call that we lost him. Doctor told us about oxygen shortage,” he recalled.

“We’ve lost our parents but the politics is still on,” he said.

In Uttar Pradesh’s Lucknow, a 61-year-old man had died after his family could not arrange a fresh oxygen cylinder.

“We went to many hospital, and we were denied admission. There were no beds, and no oxygen. We had to bring father back home. He died because we could not arrange a fresh oxygen cylinder. We went through an endless struggle. If oxygen was so readily available, why did we have to stand in queues for 10-12 hours?” asks one of the sons of the man as he spoke to NDTV.

<!-- -->Class 12 students had much to cheer about today as the Central Board of Secondary Education (CBSE) released the results this afternoon....
Read more
Latest Stories

<!-- -->Doctors served patients when their own families did not want to touch them: Arvind Kejriwal (File)New Delhi: The Delhi Assembly on Friday...
Read more
Latest Stories

<!-- -->Violence broke out at the interstate border between Mizoram and Assam on MondayGuwahati: Six senior officials in Mizoram and a Mizo National...
Read more

<!-- -->Latest round of talks will take place after a gap of more than 3 and a half months. (Representational)New Delhi: The 12th...
Read more

<!-- -->Class 12 students had much to cheer about today as the Central Board of Secondary Education (CBSE) released the results this afternoon....
Read more

<!-- -->The CBI has conducted searches on premises of the accused. (Representational)New Delhi: The CBI has filed an FIR against Amrapali Biotech and...
Read more
Load more

<!-- -->Latest round of talks will take place after a gap of more than 3 and a half months. (Representational)New Delhi: The 12th...
Read more

<!-- -->Class 12 students had much to cheer about today as the Central Board of Secondary Education (CBSE) released the results this afternoon....
Read more