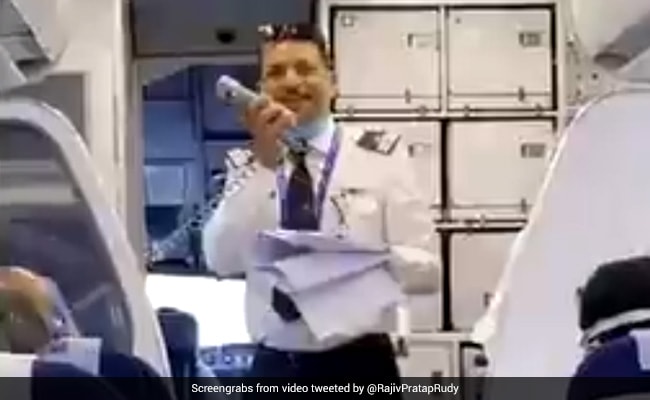 Days after he flew a plane in which DMK MP Dayanidhi Maran was a passenger and received a thumbs-up on social media, BJP MP Rajiv Pratap Rudy has piloted a flight which had several members of a Parliamentary Standing Committee, including senior BJP leaders, among its passengers.

Mr Rudy, Saran MP and a commercial pilot who flies Airbus 320-321, has shared a video on his Twitter account in which he is seen welcoming passengers by saying that it is going to be a “special and unique flight”.

“In the history of Indian Parliament, possibly, this is going to happen for the first time when a Member of Parliament is going to fly the Standing Committee of Parliament on Tourism and Civil Aviation,” he added, as passengers clapped.

Mr Rudy also says it is a “very beautiful day in history”. He then introduced his co-pilot and the cabin crew on duty. He also introduced the youngest passenger on board, Manoj Tiwari’s 6-month-old daughter Sanvika, and asked the passengers for a round of applause for her first flight. He then wished the passengers a wonderful flight before returning to the cockpit.

On July 14, when Mr Maran boarded an IndiGo flight from Delhi to Chennai, Mr Rudy came to greet him.

“‘So you are traveling in this flight as well!’ said a person dressed in the Captain’s uniform. I could not recognise him with his mask on, although his voice sounded familiar. I nodded my head, still wondering who it could be. He looked at me and his eyes gave away the smile behind the mask. ‘So you don’t recognize me!'” he tweeted in a thread named, “A flight to remember”.

“I realised then that it was none other than my colleague, senior Member of Parliament and former Union Minister – my very good friend Thiru @RajivPratapRudy Just two hours ago, he and I were part of intense discussions at the Estimates Committee and now I couldn’t believe my eyes, seeing his transformation from a politician to a pilot,” Mr Maran tweeted.

<!-- -->Fire tenders from a nearby plant joined the Haldia unit's team to fight the flames. (Representational)Kolkata: A fire broke out on the...
Read more
India

Weight Loss: Munch On This Makhana Chikki Guilt Free Even On A Diet

When we think about weight loss, sweet bars and chikkis are the last to cross our mind. We often keep away from all...
Read more
Load more