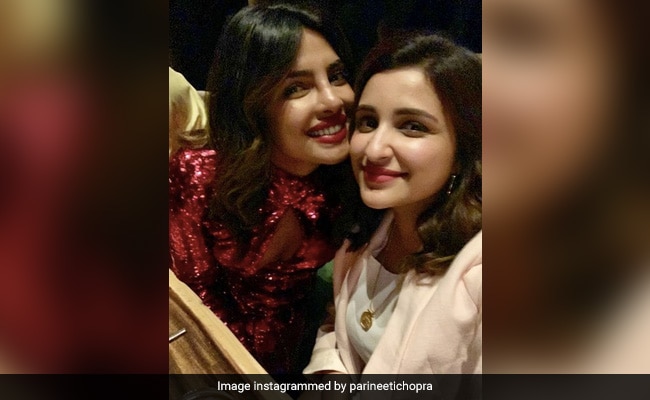 Actress Parineeti Chopra, who is currently in London with her sister, actress Priyanka Chopra, on Sunday extended birthday greetings to her “Mimi Di” with the most adorable social media post. Parineeti shared a picture on her Instagram story that features her and Priyanka Chopra‘s newly done nail art. Both Priyanka and Parineeti can be seen sporting similar nail art in different colours on their finger nails. Parineeti revealed that the sisters got the “same nail art without planning it.” Parineeti Chopra wrote: “You know you’re sisters when you go and get the same nail art, on the same finger, without planning it.” She went on to wish Priyanka Chopra on her birthday and wrote: “Priyanka Chopra, Happy Birthday Mimi Di. You are a legend. End of story.”

Check out the aforementioned picture here: 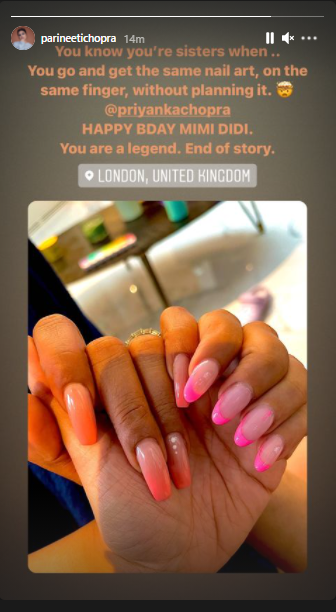 As mentioned above, Priyanka Chopra is currently in London for the shoot of her upcoming series Citadel. Earlier in the day, she dropped two stunning pictures of herself on Instagram as she ringed into her 39th. The pictures feature Priyanka in a blue monokini. She can be seen soaking up the sun by a swimming pool in the pictures.

Take a look at the pictures here:

Coming back to Parineeti Chopra, the actress recently checked into London after enjoying a long vacation in first Turkey, then Austria. Parineeti Chopra also received her COVID-19 vaccine shot in London and spent the day with Priyanka Chopra. She shared a bunch of pictures of herself clicked by Priyanka Chopra on Instagram. In one of the pictures, she can be seen resting on a couch with Priyanka’s dog Diana.

In terms of work, Parineeti was last seen in the film Sandeep Aur Pinky Faraar. Priyanka, on the other hand, was seen in Netflix film The White Tiger.