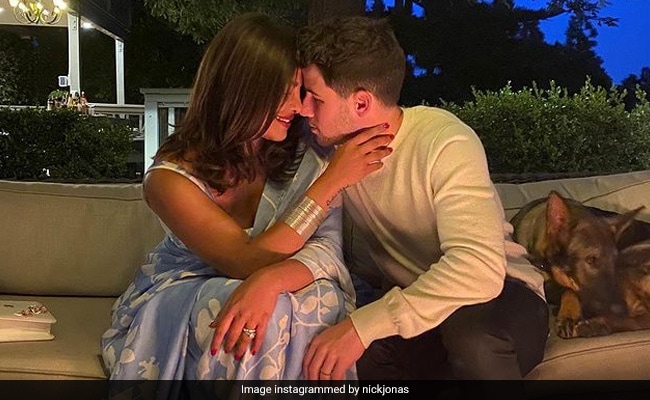 It is raining love on Priyanka Chopra and Nick Jonas‘ Instagram profiles. The couple shared mushy posts for each other on their respective Instagram profiles. Three years ago, on this day, Nick Jonas proposed to Priyanka Chopra and she said yes. Posting a throwback picture, Nick Jonas wrote: “3 years ago today.” Priyanka Chopra replied in the comments section with these words: “Thank you for asking jaan.” She too posted a picture with her husband and she wrote: “My everything… 3 years today. Seems like a blink and a lifetime at the same time. I love you.”

Priyanka Chopra and Nick Jonas met at the grand fashion event Met Gala 2017, where they represented designer Ralph Lauren. Well, Nick Jonas is a true blue romantic. The singer had shut down an entire Tiffany’s store in New York to pick out Priyanka Chopra’s ring. He had proposed to Priyanka on her birthday while vacationing. They got married at the Umaid Bhawan Palace in 2018.

Priyanka Chopra recently celebrated her birthday in London, where she is shooting for Citadel. Posting pictures from her festivities, she wrote: “Photo Dump. Thank you to everyone who sent me so much love and affection this birthday. So many wonderful texts, calls, stories, tweets. This was a quiet birthday but the lesson I have learnt as I step into the next year is every day is a joy. And I will always seek it. Thank you to for all your good wishes and constant support. Thank you Nick Jonas for making this birthday so special even though you weren’t here.”

Priyanka Chopra, who will next be seen in Citadel, featured in The White Tiger earlier this year, which she also produced. She will also star in a wedding comedy with Mindy Kaling and Amazon’s Sangeet Project, with Nick Jonas.