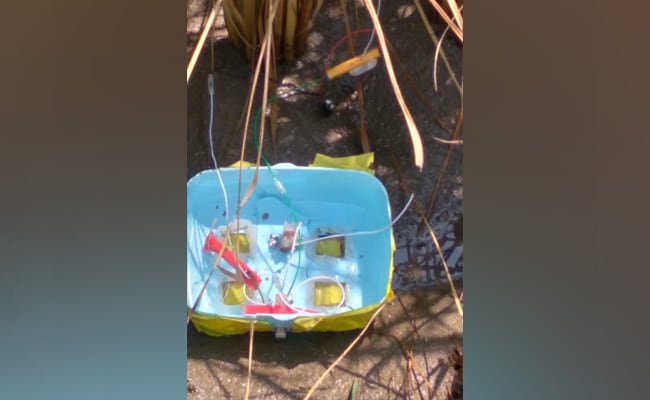 A plot to cause an explosion at a crowded area in Punjab’s Jalalabad was uncovered after the police arrested one of the men accused of planning the blast.

The police have also recovered a “tiffin bomb” – a lunchbox rigged with an Improvised Explosive Device (IED) – on the basis of information provided by Parveen Kumar, who has been arrested.

The tiffin bomb was hidden in a field near Parveen’s village Dharmupura, just 3 km from the Indo-Pak border.

This is the fourth such tiffin bomb recovered from the state in the past 40 days, said a state government statement. The statement said it is a “Made In Pakistan” tiffin box with pictures of cartoons on it and that it was part of “Pakistan’s diabolical plan to ratchet up militancy in the State & take innocent lives”.

The Punjab government’s statement informing about the developments came on a day Amarinder Singh quit as Chief Minister following a bitter tussle within the ruling Congress. Mr Singh has on several occasions flagged threats from across the border. Earlier this year, Mr Singh had urged Prime Minister Narendra Modi to resume talks with farmers protesting against the new farm laws, citing “cross-border threat” by ISI-backed groups ahead of the Assembly polls.

As per the government statement, Parveen told police that a motorcycle rigged with explosives, which went off in Fazilka district earlier this week, was to be parked at a crowded area in Jalalabad as part of the blast plot.

The motorcycle exploded in Jalalabad on Wednesday, killing the rider Balwinder Singh. Police have said Singh had a criminal record and was part of a group of four allegedly planning the blast.

Inspector General of Police, Ferozepur Range, Jatinder Singh Aulakh said that Parveen was arrested after investigation pointed to his role in the blast plot. He said Parveen has named two others, Sukhwinder Singh and Gurpreet Singh, as part of the conspiracy.

Senior Superintendent of Police, Deepak Hilori, said that police have registered a case against all the four accused and are trying to arrest Sukhwinder and Gurpreet. He said all four accused have a criminal background and are related to each other.