Python Makes An Appearance At Sydney Supermarket, Slithers Out Of Spice Shelf 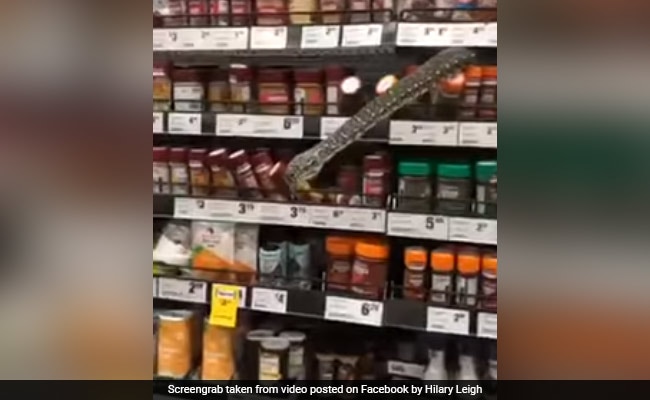 The python was spotted poking around the spice rack at a Sydney supermarket.

For most people, grocery runs are a means to relax and spend some time alone doing mundane tasks. However, things went slightly differently for a bunch of shoppers in Sydney on Monday when a rather unexpected guest turned up in a supermarket.

A three-metre python was spotted poking around the spice rack as unwitting customers were browsing the shelves. In a video that was shared on Facebook, the reptile can be seen sticking out of the spice shelf, sending bottles of condiments and spices tumbling around. The video was shared by a user named Hilary Leigh and is viral since.

The caption of the video said, “Crikee, only in Australia! Local Glenorie Woolworths had a lockdown offender today. No QR check-in and no mask. Luckily, there was a lovely person who was very familiar with this type of species and safely looked after the good looking culprit. Phew. A good outcome.”

The post refers to a woman named Helaina Alati who came face-to-face with the non-venomous snake as it slithered out.

The 23-year-old had a rather close encounter with the snake. “I just turned my head and he was about 20cm from my face, just looking straight at me,” Ms Alati told the BBC.

However, contrary to how most others would have reacted, the 25-year-old dealt with the situation calmly as she was a wildlife rescuer and familiar with snakes. Her experience helped her identify the reptile to a non-venomous variant known as the diamond python. Ms Alati said that it seemed to say, “Can you take me outside please?”

Ms Alati filmed the snake and immediately alerted staff. She also managed to get the snake out into a snake bag she had retrieved from her home. She said that she “tapped him on the tail and he just slithered in”.

She further said that she suspected the snake had been in the shop overnight. It could have been in the ceiling where diamond pythons like to nestle, she added. “To be honest, it’s the most exciting thing that’s happened in a little while given lockdown. The staff were all taking photos of it,” Ms Alati said.

According to a report by Perth Now, a spokesperson for Woolworths was quoted as saying that the section of the store was cordoned off during the entire rescue operation.

Reacting to the video, one user named Debbie Biddle said, “Geez! What a shock that would be coming at you! So unexpected!”

A user named Julie Marks confessed, “OMG I hate snakes, I would have taken everybody out with me as I ran for the exit.”

The snake was released far away from houses in the area, into the bushland, which is a natural habitat for the snake species in Sydney.