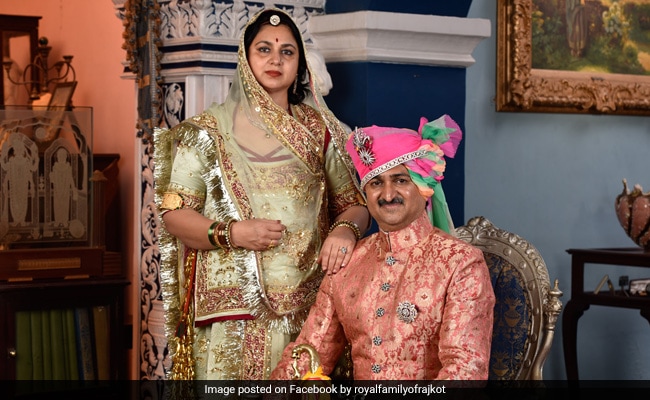 Mandhatasinh Jadeja’s advocate claimed his client’s sister was paid Rs 1.5 crore as per the will.

A bitter dispute has broken out in the Rajkot royal family of Gujarat over the ancestral property worth hundreds of crores with one of the members moving court.

Ambalika Devi, the sister of Mandhatasinh Jadeja, who is the 17th king of the over 400-year-old erstwhile princely state of Rajkot in Gujarat, has filed a suit in the city civil court against the release deed and the will of her father Manoharsinh Jadeja, her lawyer Ketan Sindhava said on Wednesday.

She has challenged the release deed which construed that she had relinquished her right on inheritance property.

Ambalika Devi, who lives in Jhansi, has claimed she was made to sign a release deed by her brother Mandhatasinh Jadeja in 2019 when she visited Rajkot following her father’s death, “by keeping her in the dark and ill-informed”, he said.

She has challenged the 2013 will of her father, that her brother produced before deputy collector in 2019 to allegedly mutate the entry in revenue records, and has sought a direction from the court to declare the release deed as null and void, Mr Sindhava said.

Based on the will and the release deed, which are under challenge, the petitioner’s brother had allegedly initiated mutation entry in the revenue department to make him the sole owner of the property, the lawyer said.

“The will of her father Manoharsinh Jadeja, the former finance minister (of Gujarat), is unregistered. The opposing party even tried to tamper with the will,” he claimed.

“A year after Manoharsinh passed away in 2018, his son duped my client by making her sign a release deed in the name of an ancestral temple. We have challenged this as well,” the lawyer said.

On Tuesday, Rajkot Deputy Collector Charansinh Gohil rejected the mutation entry on the basis of the objection raised by Ambalika Devi.

As per her lawyer, the deputy collector said the order of the civil court will be binding on both the parties.

However, Mandhatasinh Jadeja’s advocate Nirav Doshi claimed his client’s sister was paid Rs 1.5 crore as per the will which she had accepted in the presence of her husband and two sons.

She had signed a registered release deed that she will have no right on the ancestral property which was duly signed by her, Mr Doshi said.

Her husband and two sons are also witnesses to the deed that she signed in 2019, he claimed.

“We have produced all the documentary evidence in the court, and the matter is next likely to come up for hearing in the court of additional senior civil judge L D Wagh on August 31,” he said.

Mandhatasinh Jadeja was last year crowned as the 17th king of the erstwhile princely state of Rajkot. He runs a chain of heritage hotels.

Manoharsinh Jadeja, the previous king, was a five-time Congress MLA and had served as Gujarat finance minister.

<!-- -->Chandigarh: Amarinder Singh declared himself "anguished at (the) political events of (the) last five months" in a letter to Congress chief Sonia...
Read more
Top Stories