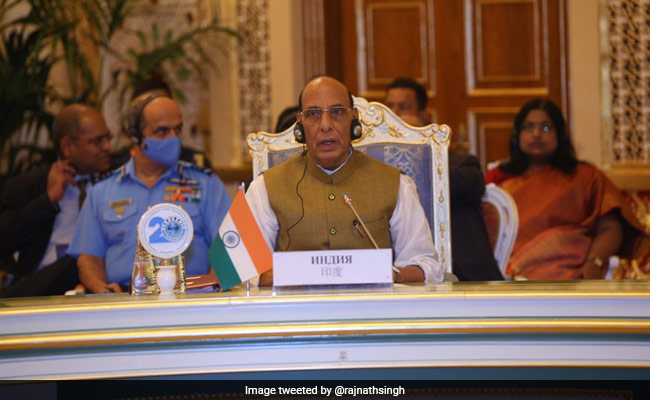 Terrorism is the most serious threat to international peace and security: Rajnath Singh

Terrorism is the most serious threat to international peace and security and support to any acts of terror is a crime against humanity, Defence Minister Rajnath Singh said on Wednesday at a conclave of the Shanghai Cooperation Organisation (SCO) in Dushanbe.

He reaffirmed India’s resolve to fight terrorism in all its forms and manifestations and said peace and prosperity cannot coexist with terrorism, in remarks seen as directed at Pakistan.

“Peace and prosperity cannot coexist with terrorism. Terrorism is the most serious threat to international peace and security,” Mr Singh said in presence of defence ministers of China, Russia and other member countries of the SCO.

Attended the SCO Defence Ministers’ meeting at Dushanbe today and reiterated India’s resolve to work within the SCO framework for helping create and maintain a peaceful, secure and stable region. Sharing the full text of my speech: https://t.co/M036LmVcr9pic.twitter.com/qsvA9yEDc8

“Any act of terror and support to such acts, including cross border terrorism, committed by whomsoever, wherever and for whatever motives, is a crime against humanity. India reaffirms its resolve to fight terrorism in all its forms and manifestations,” he said.

Mr Singh said India accords high priority to the “consolidation of trust” in the security domain within the SCO as well as strengthening ties with partners of the grouping bilaterally on the basis of equality, mutual respect and understanding.

“The challenge today is not just one of concepts and norms, but equally of their sincere practice. The leading voices of the world must be examples in every way,” he said without elaborating.

He said India is committed in its resolve to work within the SCO framework for helping create and maintain a peaceful, secure and stable region.

“India also reiterates readiness to partner with fellow SCO Member States to develop joint institutional capacities that respect individual national sensitivities and yet generate a spirit of cooperation to create contact and connectivity between people, societies and nations,” he said.

Singh said the geo-strategic location of India makes it both a “Eurasian land power” as well as a stakeholder in the Indo-Pacific.
“Our intent and aspirations are therefore focused towards prosperity and development of the entire region. We affirm this intent through our national policy of Security and Growth for All in the Region, commonly known by the acronym “SAGAR”,” he said.

“Security and stability are most essential components to create conducive environment for growth and economic development of the region and our respective nations,” he added.

Mr Singh said the SCO nations together encompass nearly half the human population and it covers approximately three-fifths of the Eurasian continent in terms of geographical expanse.

“We, therefore, have collective stakes to create a safe, secure and stable region that can contribute towards progress and improvement of human development indices of our people and the generations which will follow,” he said.

“It is in the same spirit India helps people of Afghanistan, which is facing violence and devastation over decades. So far India completed 500 projects in Afghanistan and continuing with some more with total development aid of US dollar 3 billion,” he added.

The SCO, seen as a counterweight to NATO, is an eight-member economic and security bloc and has emerged as one of the largest transregional international organisations.

India and Pakistan became its permanent members in 2017.

The SCO was founded at a summit in Shanghai in 2001 by the presidents of Russia, China, the Kyrgyz Republic, Kazakhstan, Tajikistan and Uzbekistan.

India has shown keen interest in deepening its security-related cooperation with the SCO and its Regional Anti-Terrorism Structure (RATS), which specifically deals with issues relating to security and defence.

India was made an observer at the SCO in 2005 and has generally participated in the ministerial-level meetings of the grouping, which focus mainly on security and economic cooperation in the Eurasian region.

<!-- -->Police horse Shaktiman was given a prosthetic leg but died of infection one month later. (File)Dehradun: A court in Uttarakhand has acquitted...
Read more
Latest Stories

When Should One Start Exercising After Delivering A Baby? Expert Tells

<!-- -->It is safe to continue exercising a few weeks after getting pregnant under expert supervisionThe pregnancy period can be one of the...
Read more
Latest Stories

Hotel Told To Pay Rs. 2 Crore Over Haircut, Shattered Her Dream To Be…