Samajwadi Party Protests Against UP Government Over Covid “Mismanagement” 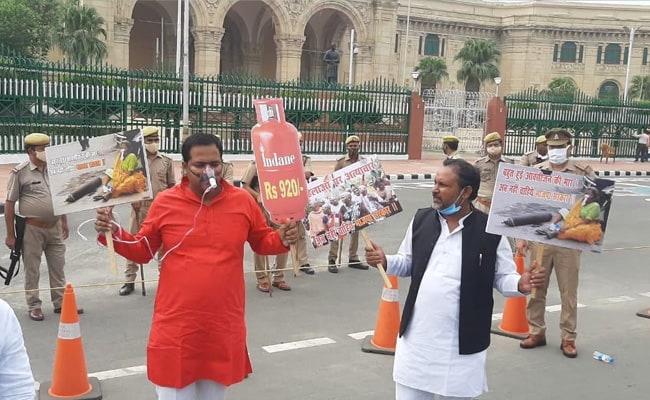 Wearing oxygen masks and carrying placards, Samajwadi Party MLAs and MLCs on Tuesday protested against the BJP government outside the Uttar Pradesh Assembly in Lucknow over its “mismanagement” of the COVID-19 situation, price rise and other issues.

On the first day of the Monsoon session of the House, SP members also staged a dharna at the Chowdhury Charan Singh statue inside the assembly premises and raised slogans against the government.

SP MLC Rajpal Kashyap told PTI, “We are protesting against the government that is anti-people. The SP always stands with the people and raises their voices. Unemployment, woes of farmers, women’s security, price rise, corruption and mismanagement of the Covid situation are some of the issues that we are raising.”

An MLC was seen wearing an oxygen mask to highlight the government’s alleged failure to provide oxygen to COVID-19 patients at the peak of the second wave of the pandemic in April-May.

Some held small cutouts of LPG cylinders with the hiked price written on them, while others held mirrors in their hands to “show the truth” to the government.

In a tweet in Hindi, SP president Akhilesh Yadav said, “We will tell everyone about the BJP’s lies and show the mirror to BJP workers.”

The SP MLAs and MLCs later sat on a dharna at the Chowdhury Charan Singh statue in the assembly premises and claimed that the people were fed up with the government due to the price rise and crimes against women.

Meanwhile, talking to reporters ahead of the assembly session, Chief Minister Yogi Adityanath said his government is ready for discussion on all issues related to public interest, development, youth, women and villages.

He said whatever happens inside the assembly sends out a message everywhere else in the country.

“There should be a discussion on Covid control. UP is the first state to have tested 7 crore samples (for COVID-19). It has become the first state to administer six crore vaccine doses. If all the members support, those spreading rumours will be exposed,” the chief minister said.

<!-- -->The 117-member Punjab assembly will vote early next year (File)New Delhi: There is fresh sparking in the Punjab unit of the Congress....
Read more