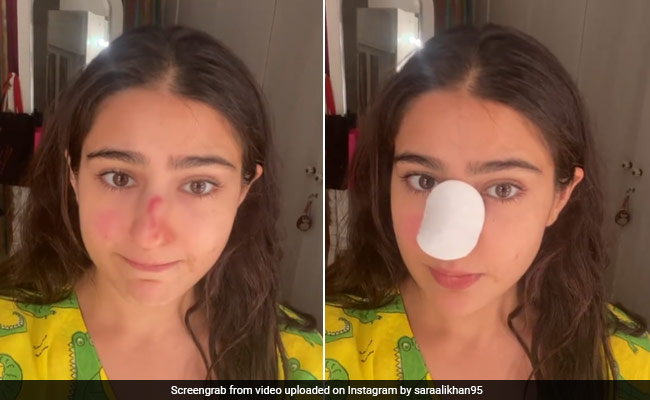 Sara Ali Khan in a still from her video (courtesy saraalikhan95)

Only Sara Ali Khan can do something like this. On Tuesday, the 25-year-old actress checked in on Instagram with yet another ‘Knock Knock’ video but this time, she posted it to reveal her nose injury. Sara Ali Khan, who is known for being her real self on Instagram, made an appearance on Instagram recently with her nose covered in a cotton patch. Describing her state as “knocked out,” Sara Ali Khan tried infusing a twist of humour as she removed the cotton patch, revealing an injured and bloody nose. “Knock knock, who’s there? Knock. Knock who? More like knock out,” she said in the video. Sara, being is such a sport, captioned her video in these words: “Sorry Amma Abba Iggy. Naak kaat di maine (a saying in Hindi, which means embarrassing someone).”

Sara Ali Khan is the daughter of actor Saif Ali Khan and his former wife Amrita Singh. On social media, Sara refers to her brother Irabhim as Iggy. Needless to say, Sara Ali Khan’s post was flooded with ‘get well soon’ messages by a very concerned Instafam.

In Sara Ali Khan’s recent Instagram activities, there’s been no whiff of her nose injury. On Sunday, Sara dedicated this heart-warming post to her friends.

In terms of work, Sara Ali Khan is currently awaiting the release of Atrangi Re, in which she co-stars with Akshay Kumar and Dhanush. The release of the film was postponed because of the coronavirus pandemic. The shooting schedule of the film wrapped in March. Sara Ali Khan stepped into Bollywood with Kedarnath and has also featured in films such as Simmba, Love Aaj Kal and Coolie No 1.