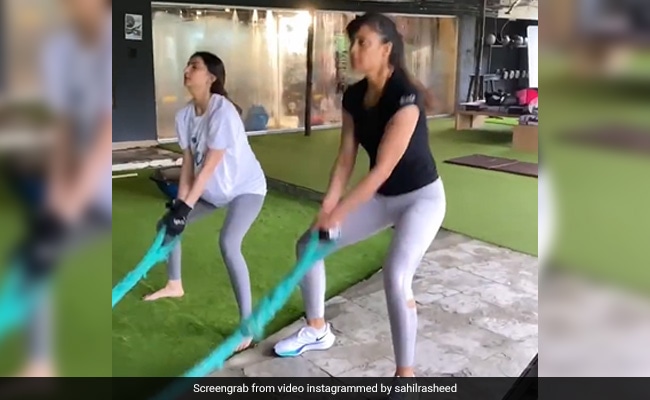 Shweta Tiwari and her daughter Palak occupied a spot on the list of trends on Thursday after a video of the mother-daughter duo working out together surfaced on the Internet. Palak is Shweta Tiwari‘s daughter with her first husband Raja Chaudhary. The actress is now married to actor Abhinav Kohli and they have a son named Reyansh. On Wednesday, Shweta and Palak’s trainer Sahil Rasheed shared a video of them sweating it out together during their circuit training. The video shows how the mother-daughter duo “motivate and challenge” each other. Sharing the video, the trailer wrote: “Like Mother, Like Daughter. Shweta Tiwari and Palak Tiwari challenging and motivating each other.”

Check out the trending clip of Shweta Tiwari and Palak here:

Shweta Tiwari was recently in Cape Town shooting for Khatron Ke Khiladi. The actress has shared many photos of herself with her co-contestants from the capital of South Africa. Take a look:

Shweta’s daughter Palak Tiwari will soon make her Bollywood debut with Rosie: The Safforn Chapter, a film produced by Vivek Oberoi and directed by Visal Misra. Vivek will also co-star with Palak in the film.

Earlier this month, Palak Tiwari trended big time on social media after she shared stunning pictures of herself from her photoshoot. She wasn’t active on Instagram from January 22 till June 4 and the day she returned to the photo-sharing platform, she sent the Internet into a tizzy with breathtaking photos of herself. Here are some of the pictures we are talking about:

In terms of work, Shweta Tiwari is best-known for playing the role of Prerna Basu in the first installment of Ekta Kapoor’s popular daily soap Kasautii Zindagii Kay. She participated in the TV reality show Bigg Boss 4 and she was the winner of the season. She also starred recently in the TV show Mere Dad Ki Dulhan.

<!-- -->Billionaire Rakesh Jhunjhunwala's plan to launch an ultra-low-cost airline could give planemaker Boeing a chance to regain lost ground in India after...
Read more