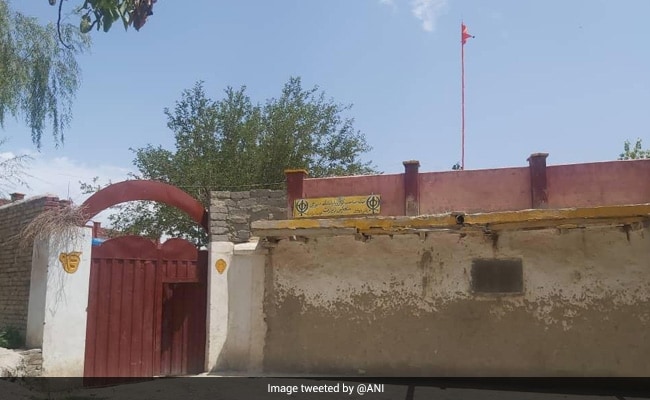 The gurdwara, located in the Chamkani area of Paktia, was once visited by Guru Nanak. (ANI)

The Nishan Sahib, which was removed by the Taliban from the roof of a Gurdwara in Afghanistan’s eastern Paktia province, was restored with its “proper dignity” on Friday night, said President Indian World Forum, Puneet Singh Chandhok.

Mr Chandhok said he talked with the local caretaker of the Gurdwara, who informed him that several Talibs revisited the Gurdwara on Friday evening and agreed to the “functioning of the Gurdwara as per its customs”.

“I have been personally informed a few minutes back by Rahman Chamkani, local caretaker at the Gurdwara that Nishan Sahib has been restored with its proper dignity at the roof of historical gurdwara last night,” Mr Chandhok said.

“He further informed that Taliban officials including their forces revisited the Gurdwara yesterday evening and conveyed their assent for the functioning of the Gurdwara as per its customs and also directed him to restore the Nishan Sahib immediately in their presence,” he added.

The gurdwara, located in the Chamkani area of Paktia, was once visited by Guru Nanak.

The restoration of the Nishan Sahib comes after India condemned its removal.

“We condemn this act and reiterate India”s firm belief that Afghanistan’s future must be one where the interest of all sections of Afghan society including minorities and women are protected,” government sources said.

Mr Chandhok appreciated the efforts of the Indian government and the international community for ensuring that the rights of minorities are well protected.

“I and the diaspora deeply appreciate the efforts of Government of India and the International Community for ensuring that the rights of minorities are well protected in the Islamic Republic of Afghanistan. The data connectivity is affected in the entire region and as soon as I receive the visuals will be sharing with all,” he said.

<!-- -->Ashraf Ghairat has been named as Kabul University's Vice-Chancellor. (File)Kabul: Around 70 teaching staff of Afghanistan's Kabul University, including assistant professors and...
Read more

Microsoft on Wednesday hosted its hardware-focussed event where it unveiled the new Surface range of devices that include the Surface Laptop Studio, Surface...
Read more
Load more