When India all-rounder Hardik Pandya was taking on hosts Sri Lanka in the first of the three-match ODI series, his wife and their son watched him live at home, on a computer screen. In one of her latest Instagram Stories, Natasa Stankovic shared two clips that showed Agastya watching Hardik bowling for India. As soon as the computer screen showed Hardik gearing up to bowl, Natasa tried to guide Agastya to see his father. She asked Agastya to say “Dada”. For some time, Agastya was not amused by the computer and concentrated on a book that he was holding.

After a little more prodding from his mother, he recognised his father and said “Dada” but immediately immersed himself back into his book. 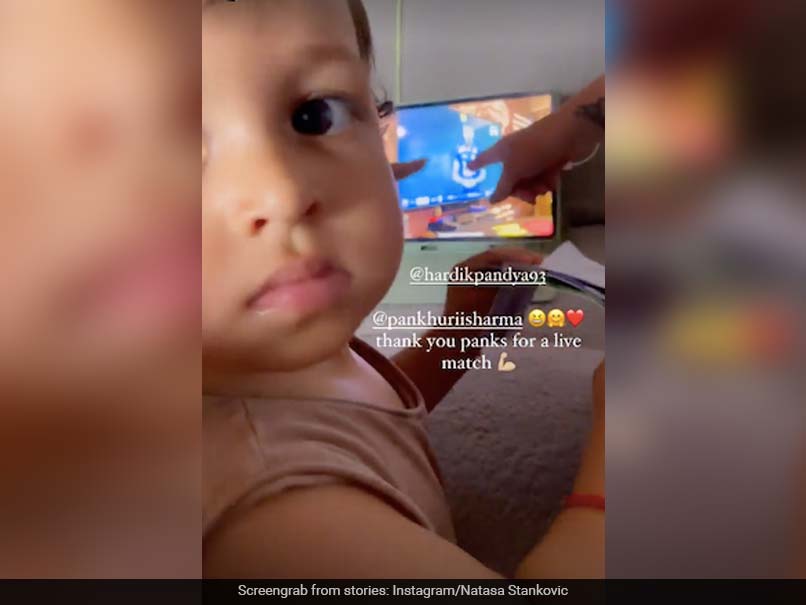 Hardik and Natasa regularly share images and videos of their son on their social media handles.

Before Hardik travelled to Sri Lanka for the cricket series, Natasa had posted a photograph of the three of them at an airport in front of what looked like a chartered flight. Hardik was holding Agastya. They had gone to an undisclosed location for a vacation.

Here are a few more instances when the duo filled their Instagram timelines with snaps of their son:

Natasa and Hardik got engaged on January 1, 2020, and welcomed Agastya on July 30. Hardik had shared the news saying in a post, “We are blessed with our baby boy.”

Usually, Natasa and Agastya accompany Hardik for his matches.

This time, however, they have opted out of accompanying Hardik for the Sri Lanka series, where a young Indian team will play 3 ODIs and 3 T20Is. In the first ODI played on Sunday, India won by 7 wickets.

The second ODI will be played on Tuesday at the R Premadasa Stadium in Colombo.

A separate India squad is in England for a 5-match Test series, which is set to start on August 4.

That team took part in the World Test Championship final and has since remained in England, while another squad, led by Shikhar Dhawan, was sent to Sri Lanka for the white-ball series.

<!-- -->Australia has handled the coronavirus crisis much better than many other developed countries.Sydney: Sydney on Friday reported a slight easing in locally...
Read more
Load more